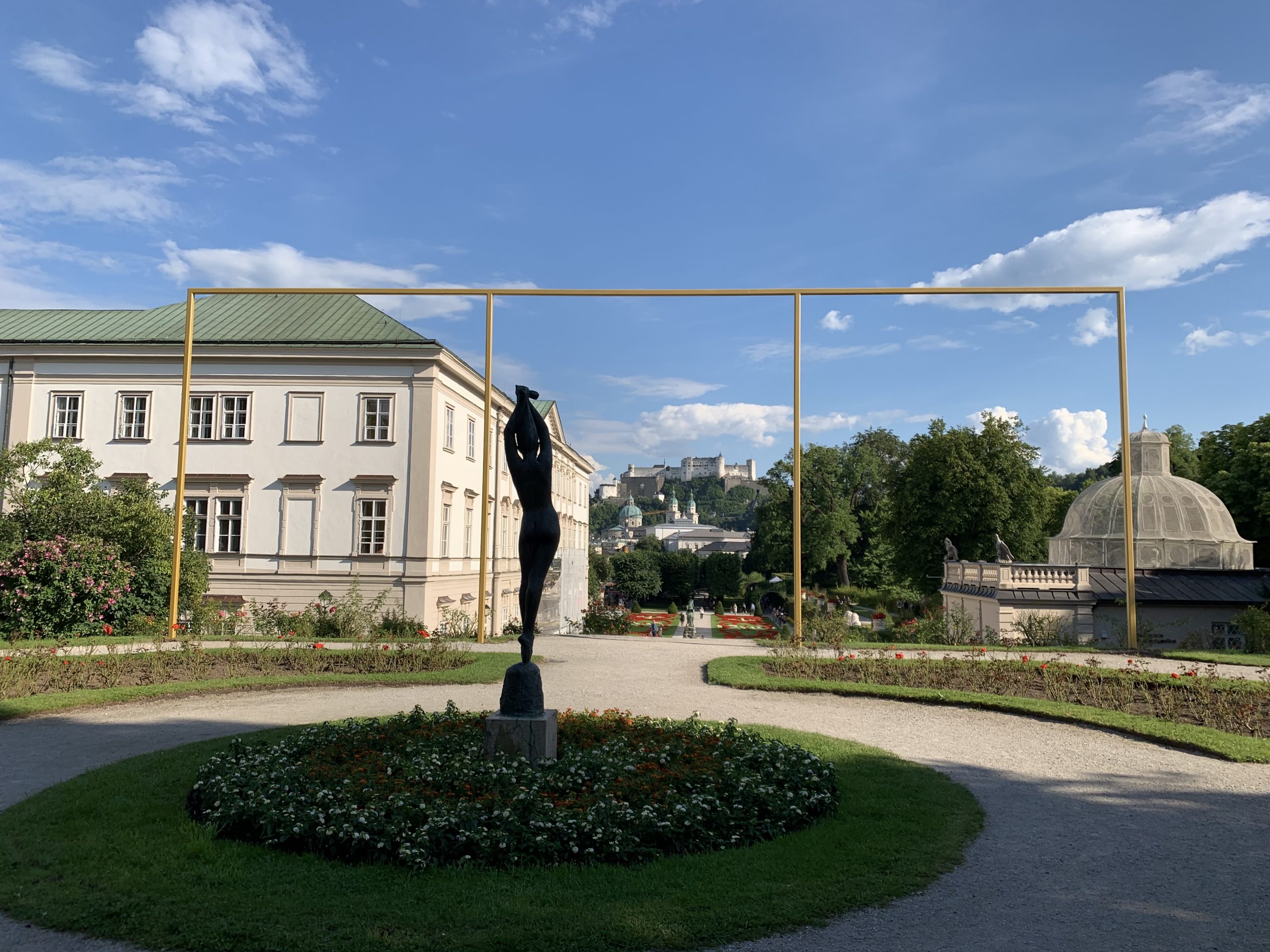 “The dream of a fairytale temple“

When, on May 25, 2020, the Salzburg Festival announced it would proceed amid the pandemic, it seemed an act of profound optimism—perhaps not unlike Max Reinhardt’s ambition to have a dedicated Festival house, conjured by Hugo von Hofmannstal as a “dream of a fairy temple, in which people from every nation on earth discover each other again.” [1] In reality, the Salzburg Festival did become one of the first “deeds of peace” after World War I, and it revived itself as a cultural peace project after World War II. Now in 2020, the Festival Direktorium has dedicated its anniversary edition to the Festival’s original principles, returning to themes of “community, the relationship of the individual to the whole, radical individualism and, as a great hope, the idea that the world can be changed through communal solidarity, through a new humanity.”[2] 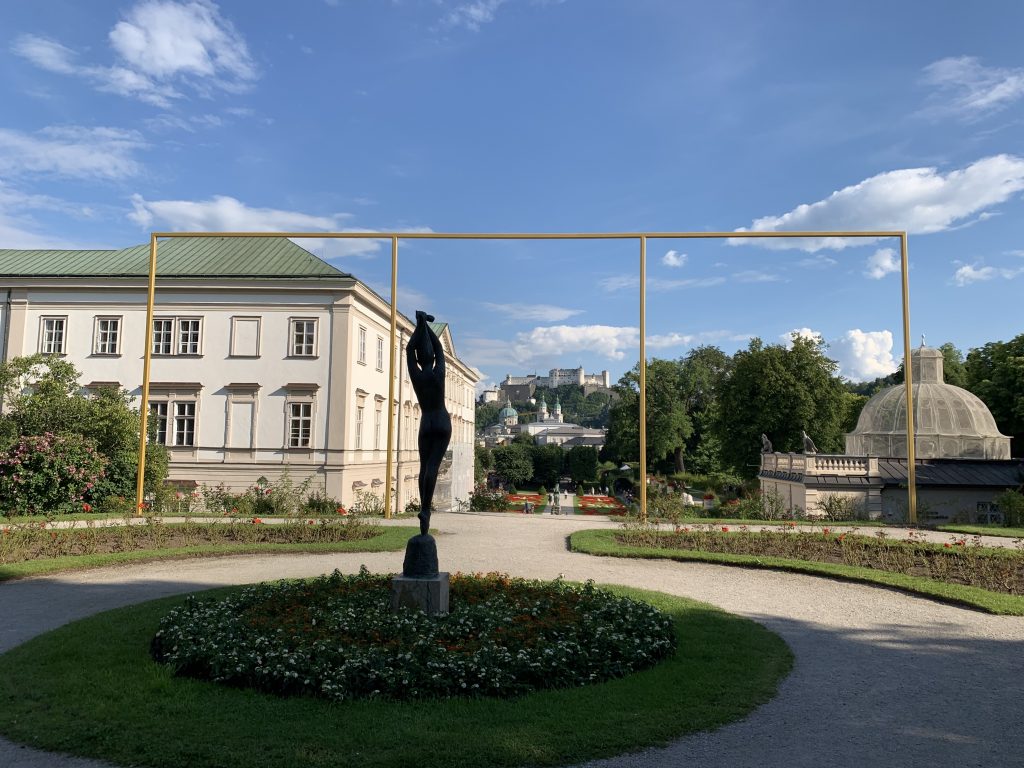 Intervention by Isa Rosenberger: a tripartite frame on the site of Clemens Holzmeister’s proposed Festival theater (1950-51) in the Mirabell Gardens. Part of the exhibition “Der Traum von einem Feentempel” in honor of the 100th Anniversary of the Salzburg Festival.” Photo credit: Katherine Baber

The Festival Direktorium took a leap of faith into the arms of the artists and staff, the audience, and the city who were all expected to adhere to strict guidelines—”communal solidarity” indeed. By most accounts, the Festival has been a success. No case of COVID-19 has been reported among the roughly 76,500 guests (one case among the staff was contained), and 96% of all seats were sold for a total of 8.7 million Euro. Despite a slower than usual tourist season, regular festival-goers were loyal, and audience members came from 39 different countries.[3] While revenues were understandably much lower than usual, especially without the draw of several opera performances, Festival President Helga Rabl-Stadler emphasized that it was a triumph to have held the Festival at all, calling it a “Leuchtturm Projekt” (a beacon project). In her statement closing the Festival she directly compared this year to other times of turbulence, recalling the “peace project” in 1920 and the “cultural beacon” that gave “hope to people devastated by war” in 1945. She declared that in thinking of the Festival’s founders, “we would have been ashamed to simply give up.” While not as given to mystical or sacred language as Hofmannsthal or Reinhardt, Rabl-Stadler has a keen sense of the Festival’s significance as a leading artistic center and a site of cultural diplomacy.

During the postwar period, Americans were literal keepers of the peace and supporters of the cultural revival that the ongoing Salzburg Festival represented. As discussed in the first post, the American military occupation helped reorganize the Festival, American audiences provided income, and the U.S. provided significant funding to Austrian redevelopment through the Marshall Plan. Americans’ economic contributions were welcome, but the same could not be said of all American cultural contributions. Hollywood, jazz, and musical theater were popular enough, even after the occupation ended, but American classical music struggled to find a place on orchestral programs and opera seasons. However, during his term as Artistic Director of the Salzburg Festival (1956-1960), Herbert van Karajan pushed to internationalize and modernize its repertoire and performers. In 1958 Festival audiences saw their first American opera—Samuel Barber’s Vanessa, which had premiered earlier that year at the Met. The critical and audience reactions to Barber’s opera were lukewarm at best and derisive at worst, but the following year, when they heard the first performance by an American orchestra—the New York Philharmonic under the baton of Leonard Bernstein—the concert was enthusiastically received. The warmer reception for New Yorkers at the 1959 Festival also extended to performances by Jerome Robbins’s Ballets U.S.A.—an ad-hoc company he had created to perform at Gian Carlo Menotti’s Festival of Two Worlds in Spoleto, Italy (the precursor of today’s Spoleto Festival in Charleston, South Carolina). The resurgence of an American presence in Salzburg, this time on stage, met with some complaints, but Robbins and Bernstein proved able to navigate the cultural and political currents of the Festival, each in their own way. Robbins played to type and Bernstein played diplomat.

The music and choreography of Robbins’s program with the Ballets U.S.A. leaned into a particular vision of Americanness that European audiences were primed to accept: modern, urban, energetic, irreverent. A given critic’s taste mattered less in reviews than that Robbins and his dancers conformed to these expectations. Their program featured music and choreography inspired by jazz and social dance in New York Export, Opus Jazz, a satiric remix of Chopin in The Concert, and the bold choice of an abstract ballet without music in Moves. The performance of a Black principal dancer, John Jones, in a pas de deux with a white partner, Wilma Curley—a daring move at home in the Jim Crow era—went largely un-remarked upon in Salzburg.[4] The lack of reaction from European audiences could be attributed their familiarity with the performances of Black American jazz musicians in Europe–Jones’s role in Opus Jazz confirmed expectations. The Ballets U.S.A. appearance also resonated with earlier performances featuring African American artists that had been well-received in Austria, such as the 1947 tour of Porgy and Bess. With headlines like “Ein Weltballet der Marke Amerika” (A World Ballet of the American Brand) and “Abstrakter Tanz—Import aus Amerika” (Abstract Dance—Import from America), the reviews confirmed that Austrian audiences had seen and heard the Ballets U.S.A. as “on brand” for America.[5]

Not everyone was ready to accept the leap from Broadway to Salzburg, however. One review in the Wiener Zeitung allowed that the ballet’s “own American touch may be original” but found it was missing “that high dance culture and noble grace that one must present as authorization for an appearance at the Salzburg Festival.”[6] The officiousness of “Berechtigungsausweis” (authorization or license) is intentional and of a piece with other politicized reviews. Lothar Sträter in Das Feuilleton described the Ballets U.S.A. stop in Salzburg as the “Robbins Truppe-Station” (punning on the military and artistic meanings of “troupe”) while referring to the presence of both Bernstein and Robbins as an American “invasion” of the Festival.[7] However, the tone of Sträter’s review was lightly satirical, eventually admitting that American musicians might bring “a fresh wind” if the quality was high enough, which it apparently was in 1959 as opposed to the unsuccessful opera the year before. The crucial difference seems to have been that while Barber’s Vanessa was perceived as a poor imitation of Giacomo Puccini’s operas, Robbins’s contribution was “original.” Better to be authentically American, even if a touch too popular, than to come bearing a European knock-off.

The tendency to cast artists as representatives of national types that framed the reception of Robbins and Bernstein can be seen in much of the music criticism, programs, and promotional materials of the 1950s and 1960s. For instance, the program of the 1959 Festival described the guest orchestras and conductors as forming a “Landkarte der Musiktemperamente” or “map of musical temperaments.” Joseph Keilberth embodied the “best German character” in his “mixture of thoroughness and deliberation” whereas the French Manuel Rosenthal’s conducting was characterized by “Mediterranean lightness and grace.” Bernstein and the Americans demonstrated the “highly developed pattern precision” of the United States, with the term “Musterpräzision” combining coordination in the military and manufacturing senses. Salzburg, of course, lies at the center of this “künstlerische Kompaß” (artistic compass).[8] Even at the Festival’s founding, writers like Hofmannsthal positioned the Austrian Baroque city as a “Weltstadt” or “Mittelpunkt”—a cosmopolitan center of Europe. The “official” sounding language in the reviews and the geographical metaphors in the programs were part and parcel of the reconfiguration of that earlier impulse for the newly independent and neutral Austrian state. Hence the description of Bernstein as an ambassador at a “Gipfeltreff”—a “summit” in both the artistic and political senses.[9]

The idea of a “summit” is apt given the political purpose behind Bernstein and the New York Philharmonic’s presence in Europe. Funded by the State Department, they were on their way from Western Europe to Eastern Europe and the Soviet Union. Bernstein leaned into this mission abroad with a program that began with Barber’s Second Essay for Orchestra and ended with Dimitri Shostakovich’s Fifth Symphony—representative American and Russian works on a tour designed to promote cultural understanding in the midst of the Cold War. In between stood Bernstein’s own Symphony No. 2, a move that cast him as a mediator and showcased his multiple talents. (His original program, which also included his performance of a Mozart concerto while conducting from the keyboard, making for a trifecta of composer-conductor-performer, had met with a polite but firm refusal from the Festival administration.) Audiences and critics clearly picked up on the program’s message. Das kleine Volksblatt declared that that the imminent meeting between Dwight D. Eisenhower and Nikita Khrushchev (September 25, 1959) was anticipated in the encounter between American and Russian composers on the Philharmonic’s program.[10] The reception that followed the concert, hosted by Ambassador Gordon A. Ewing from Vienna and the consul in Salzburg, Rebecca Wellington, brought out the diplomatic undertones of the occasion and gathered leading personalities of the political and cultural life of Salzburg, including the “Künstlertrifolium” (artistic triumvirate) of Karajan, Bernstein, and the more senior conductor, Dimitri Mitropolous.[11]

The success of this musical diplomacy depended on the twin forces of Bernstein’s skill as a conductor and the desire of Austrian critics to position their country at the center of European culture by certifying Bernstein and Shostakovich via their relation to Austrian music. Comparisons to the Austrian composer and conductor of the Court (now State) Opera, Gustav Mahler, were frequent in the reviews of this concert and many other concerts Bernstein gave in Austria over the years. Like his mentor Mitropolous, Bernstein was a proponent of Mahler’s music, and his affinity also stemmed from their similar roles as composer-conductors and their shared Jewish heritage.[12] One critic even attempted to bring Shostakovich’s Fifth Symphony into this relationship, noting how similar Shostakovich’s third movement sounded to the Ländler (a dance heard in many of Mahler’s works) and its “surprisingly alpine twists.”[13] Certainly, Bernstein understood himself as a Jewish artist (though not exclusively so), interpreted Mahler as a Jewish composer, and was keenly aware of Austrian anti-Semitism and how it shaped perceptions of both Mahler and himself.[14] In the reception of this 1959 program, however, critics seemed most concerned with searching out affinities to Austria, and Salzburg in particular, through Mahler. The invocation of an “alpine” mood also called out to the landscape of the Salzkammergut, where countless artists and musicians, including Mahler,