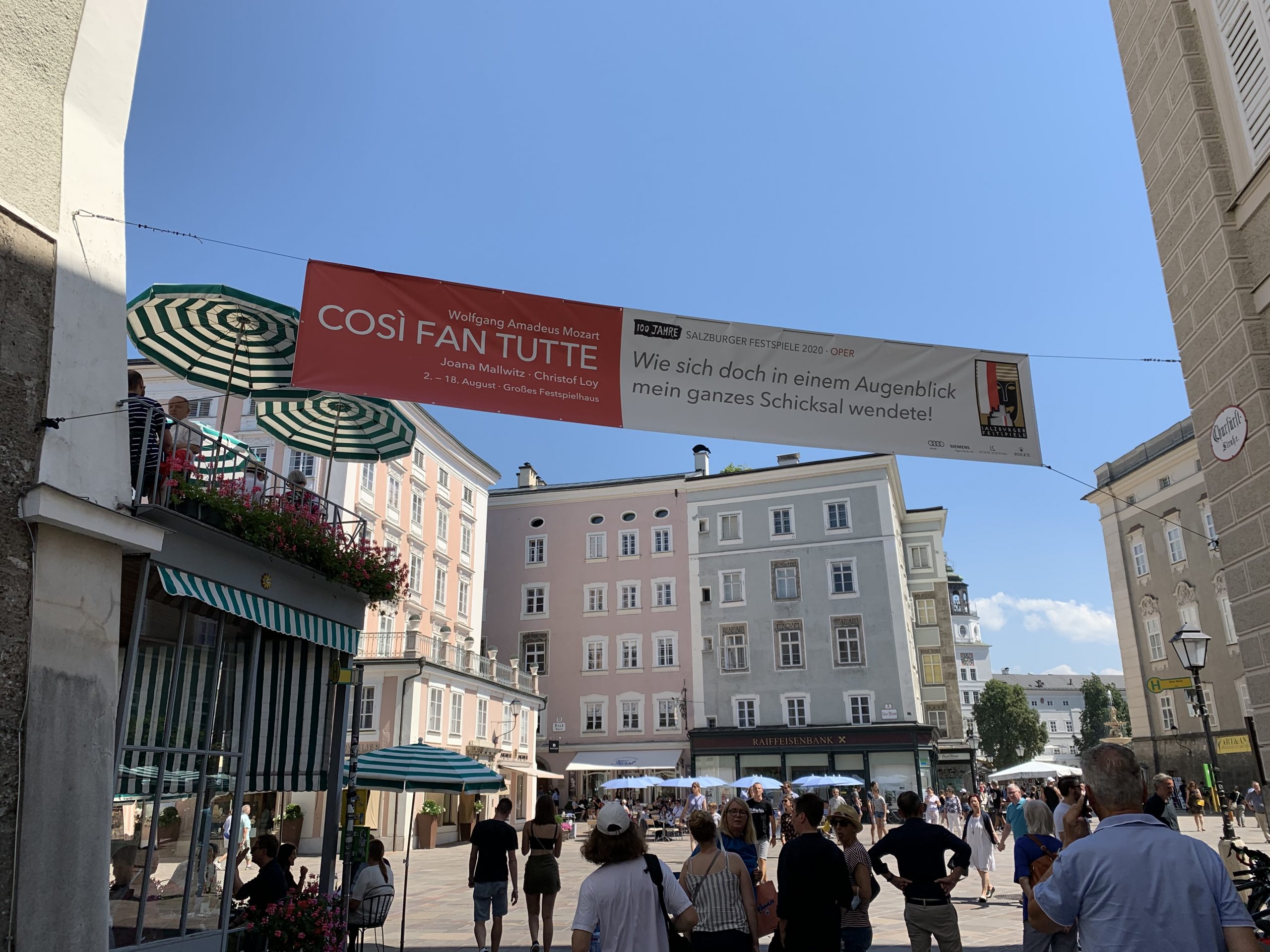 “How in a moment my whole fate has changed!”

Near the end of the first act of Così fan tutte, Dorabella and Fiordiligi are bewildered, mourning the sudden departure of their fiancés for war. They have no idea how much more profoundly their lives are about to be disordered. As the sisters retreat to their garden, Mozart tempers the words of Lorenzo da Ponte’s libretto by casting their duet in a tranquil mood, setting them up to have the rug pulled out from under them moments later in a typically rambunctious finale. What ensues—deception, disguises, loss of innocence, the questioning of love and loyalty—alters all. The couples who are married at the end are fundamentally different people than they were at the beginning. This Italian-style opera buffo is comic, yes, but also cautionary. Mozart might have warned us about 2020.

Seemingly as abruptly, the disruption and confusion we witness in Così fan tutte has entered all our lives in the midst of the COVID-19 pandemic: Millions infected, hundreds of thousands dead, a global economic depression, and the psychological and social effects of isolation and loss. In terms of culture, the impact on the performing arts has been especially devastating. While galleries, museums, and other public spaces began re-opening throughout Europe in June, the respiratory nature of the virus means that the activities of dancers, actors, and musicians (particularly singers) must still be heavily restricted, transformed, or re-mediated. Spring seasons were cut short and many institutions in the United States, including the Metropolitan Opera, have furloughed or laid off personnel and will not resume performances until 2021 at the earliest. Some arts organizations undoubtedly will not survive, unless they receive substantial government support, as an open letter from conductors Sir Simon Rattle and Mark Elder warned in June.

While radio broadcasts, livestreams, virtual choirs, and more inventive modes of performance have proliferated during lockdowns, Rattle and Elder argue that something crucial is being lost: “the living core of our work is a live communion, a sharing of space, art and emotion which is both vital and healing.”[1]

The stakes are even higher now for the Salzburg Festival as it celebrates its 100th anniversary. After waves of cancellations in the spring— Bayreuth, Edinburgh, Tanglewood—it is the only international festival of its kind proceeding as a live event this summer, albeit in a radically altered form. The “house band” of the Festival, the Vienna Philharmonic, laid the groundwork for this new model, beginning with a scientific study in May that measured the spread of aerosols during the playing of orchestral instruments. The results were made available to the Austrian Ministry of Health and to the public as a visually striking Instagram post. This and other studies, plus the model of the Philharmonic’s first concerts post-lockdown, provided a precedent for the new policies of the Salzburg Festival. These measures include color-coded groupings of artists and staff according to the extent that they can socially distance themselves and a comprehensive system of testing and tracing. The entire Vienna Philharmonic, for example, falls into the red group, which cannot practice social distancing during rehearsal and performance at all, and so are tested frequently. 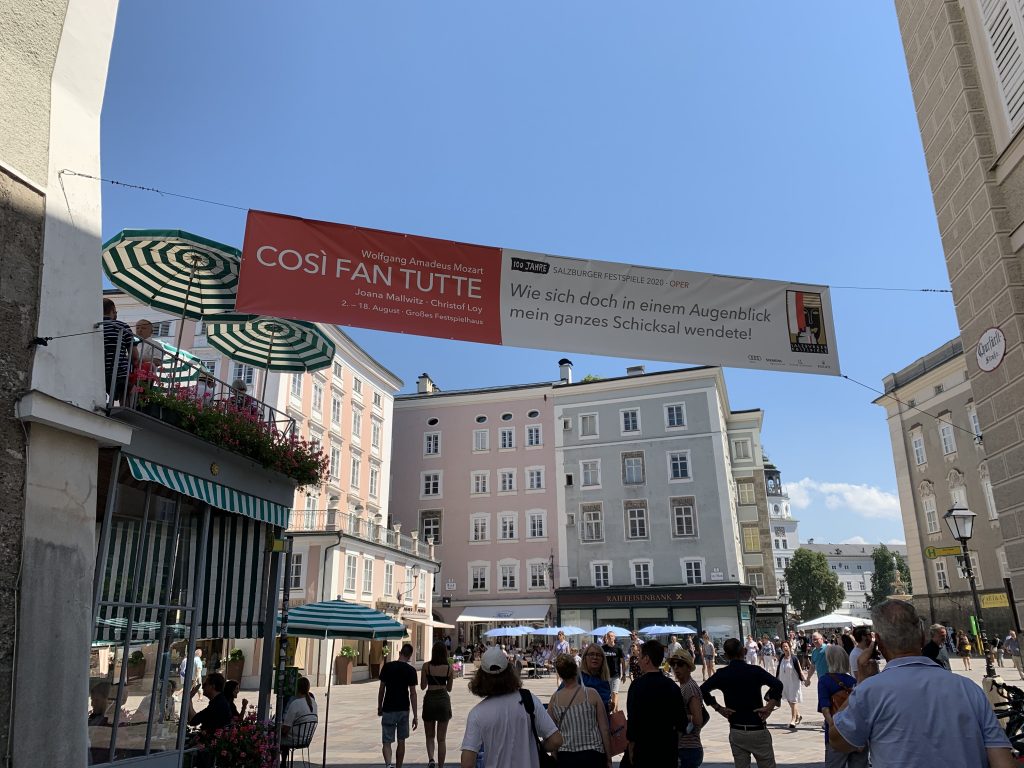 Audiences are likewise being carefully managed: non-transferable tickets linked to contact information for tracing, dedicated external entrances for each section of the hall, no intermissions, no lobby bars, no mingling. The required masks make for a striking intervention in the usual fashion parade of stylish, wealthy guests. (Branded masks with the Festival’s 100th anniversary logo sold out almost immediately.) Audience behaviors have shifted, too. The ubiquitous coughing, throat clearing, and shuffling between movements is miraculously gone, although the tendency to linger at outdoor cafes and bars nearby is not. The lack of intermissions means shorter programs, leaving more time in the rest of the evening to visit local establishments eager for the income after months of instability. Although Festival guests by and large are following the new directions, bars and cafes are having more trouble managing social distancing and the strict “Sperrstunde” (closing hour) which is set at 1:00am and now means that the establishment must close absolutely, rather than allowing guests to leave as their drinks and conversations are finished.

The program has also been altered to accommodate the new reality while preserving the essence and intent of the anniversary edition of the Festival. As the Festival Direktorium stated in the original program booklet, the Festival does not need to be “reinvented” every year but “it must be led again and again into a new present.”[2] Public health and practicality now drive this year’s “not-a-reinvention” as much as the assessment of the Festival’s legacy.

Of the ten operas originally scheduled only two remain—Richard Strauss’s Elektra and Mozart’s Così fan tutte—but they honor one of the Festival’s founders and Salzburg’s most famous citizen. A production of Die Zauberflöte led by two women—Joanna Mallwitz as musical director with Lydia Steier as stage director—was cancelled, but Mallwitz still leads the production of Così fan tutte in an important first for the Festival. The only true constant from year to year, the mystery play Jedermann remains, preserving this legacy of the other two founding fathers of the Festival, the playwright and librettist Hugo von Hoffmannstahl and director Max Reinhardt. This was perhaps the easiest choice, as the play is traditionally performed outdoors with the Baroque facade of the Salzburger Dom as backdrop. Star power and long-standing relationships have been preserved where possible. Anna Netrebko (who has dual Russian-Austrian citizenship) and Cecilia Bartoli (artistic director of the Salzburg Whitsun Festival) were scheduled to headline productions of Tosca and Don Pasquale but are still giving concerts. Perhaps most importantly, the Festival program still features Beethoven in the year of his 250th anniversary. Russian pianist Igor Levit is proceeding with the planned cycle of all 32 of Beethoven’s sonatas and the Ninth Symphony, with its sorely needed “Ode to Joy,” was a highlight of the Vienna Philharmonic concerts.

On the other hand, travel restrictions and the individual circumstances of some artists mean that the festival is less international than usual. While the Vienna Philharmonic is the mainstay of operas and concerts, guest orchestras have been important cultural ambassadors to the Festival, especially since the 1950s. Of the nine guest orchestras originally invited to the centennial, only three remain. All come from within Austria or Western Europe: the ORF Symphony Orchestra, the West-Eastern Divan Orchestra, and the Berlin Philharmonic (a rival to Vienna since Herbert van Karajan’s years as musical director of the Festival). Similarly, recitalists and opera casts are nearly all European. Notably absent from the Festival program, as from Europe in general at the moment: Americans.

As Europe cautiously re-opened in June, tourists returned to Salzburg, but even now museums and tourist sites like the Getreidegasse and Mozart’s birth house remain far less crowded than usual without (big-spending) travelers from the United States and Asia. As far as the Festival is concerned, however, American musicians have never been a significant presence and American music even less so. The exceptions have been star performers like Yehudi Menuhin or Leontyne Price. At its founding in 1920, the cosmopolitanism of the Festival was still rooted in a national program—a “Bayreuth for Mozart”—and a nationalist perspective. It was internationalist only in terms of its audiences, a necessity as ticket prices put attendance out of reach for most Salzburgers.[3] Even so, the United States and some American artists have been influential actors in the Festival’s history, especially in the years after World War II.

The U.S. military occupation, under the command of General Mark W. Clark, was instrumental in the near-miraculous revival of the Salzburg Festival in 1945, less than three months after the end of the war. Just as the Festival had been immediately absorbed into the cultural machinery of the Third Reich in 1938, the occupying forces moved to swiftly rehabilitate the organization, returning Bernhard Paumgartner to the Festival Direktorium and Baron Heinrich Puthon to the presidency. As Clark made clear in his address to the public at the opening ceremony in 1945, the revived Festival served as “evidence that the common efforts of the Austrian people and the United Nations to restore a free, independent Austria will soon succeed.”[4] While the Information Services Branch (ISB) of the U.S. military did not always succeed in communicating its pro-American agenda through the programming of American works at the Festival, Americans did become important from an economic standpoint. Founded the following year in New York, the Society of the Friends of the Salzburg Festival encouraged summer travel to Salzburg and, more broadly, funds from the Marshall Plan supported the redevelopment and expansion of tourism in the region.[5] From 1947 the Salzburg Seminar in American Studies, housed in Max Reinhardt’s former residence in Schloss Leopoldskron, served as a “Marshall Plan for the mind,” introducing Austrians and other Europeans to American history, art, literature, and culture. (It continues today as the Salzburg Global Seminar.) Salzburg may well be the most American-oriented city in Austria, but you would not know that looking at a Festival program, either today or at most points in its history.

In an essay written for the Austrian Embassy in Washington, D.C., Festival President Helga Rabl-Stadler leans heavily into the myth of the “Golden West” in Austria, crediting the American occupation for the rejuvenation of Salzburg’s most important cultural institution. However, she mentions no American artists.[6] Despite the best efforts of the ISB and later the United States Information Agency (USIA), Austrian audiences have never been fully convinced of the aesthetic value of “serious” American music. Musical theater (with its affinity to operetta), jazz, and rock’n’roll were welcomed. Operas and symphonies, however, remained “the last refuge of supposed superiority” for Europeans in general and Austrians in particular.[7] Hence the concerted efforts to reform the image of Mozart as the “good Austrian” for the new Republic, humanized to fit a small state identity, but also proof (with Haydn and Beethoven) that Vienna was the capital of the musical world.[8] The Viennese celebrations of Mozart’s 200th anniversary in 1956, one year after Austrian independence, offered proof that this image of the Austrian capital was still viable. The Salzburg Festival, however, asserted every year that it was the true “Mittelpunkt” of classical music worldwide.

In the twilight of the Pax Americana, it is revealing, and perhaps clarifying, to re-examine a cultural space in which the United States never did achieve the hegemony it sought. The end of American dominance has been forecast for decades, throughout the presidencies of both George H.W. Bush and Barack Obama. The election of Donald Trump seems to have accomplished the final collapse with the withdrawal of the United States from global politics and international cooperation, the disastrous lack of response to the COVID-19 pandemic, and the violent response to Black Lives Matter protests. Beyond the realpolitik, to the extent that America is an idea and image, the aesthetics also matter. As Tom McTague points out in The Atlantic, because economic dominance has yielded cultural dominance, the United States has a constant audience. And, “if it’s the aesthetic that matters, the U.S. today simply doesn’t look like the country that the rest of us should aspire to, envy, or replicate.”[9]

In facing this moment, what might we learn from the ideological framing a