On September 29, 1995, Dietrich Botstiber penned his name to a trust that would be the governing document for the Dietrich W. Botstiber Foundation. 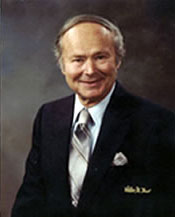 The Dietrich W. Botstiber Foundation, was named after Dietrich W. Botstiber, who was born in Vienna, Austria, in 1912. His father was the general manager of the Konzerthaus, one of the major musical institutions in Vienna, so Botstiber grew up in a home where notable composers, conductors, musicians, and singers were frequent visitors. Although he had a classical education, his interests were in science and technology rather than literature and the arts. He graduated in 1935 from the Technical University of Vienna with a Diplom Ingenieur (the equivalent of a Master of Science degree). He had to abandon his research work on semi-conductors and forego finishing his PhD at the University of Vienna when the Nazis took power in Austria and he emigrated to the United States in 1938. After working in a fascinating variety of jobs and development projects (from cigar manufacturing, machinery and vending machines to armaments and helicopters), he founded Technical Development Company (TEDECO) and did pioneering work on failure detection devices and high-speed power transmission assemblies. TEDECO was also involved in consulting and specialized in manufacturing for major aerospace companies.

Botstiber retired and sold TEDECO in 1985 and died seventeen years later, on December 21, 2002. Learn more about Dietrich Botstiber from his autobiography, Not on the Mayflower, which is available by order at Amazon and Alibris.

Roots of the Botstiber Foundation

On September 29, 1995, Dietrich Botstiber penned his name to a trust that would be the governing document for the Dietrich W. Botstiber Foundation. In the trust, Botstiber set forth his charitable intentions: to provide scholarships to talented students of good moral character in the fields of science, technology and commerce; to promote an understanding of the historic relationship between the United States and Austria; to support programs that prevent cruelty to animals and human beings; and to reform education systems in the fields of science, technology and commerce.

In its early years, the Botstiber Foundation was led by Robert T. Boylan whose energy, vision and foresight forged a path for the future of the Foundation’s programs. Robert Boylan passed away in 2002, followed later that year by Dietrich Botstiber.

For e-mail updates about the Institute and upcoming events, enter your name and e-mail.