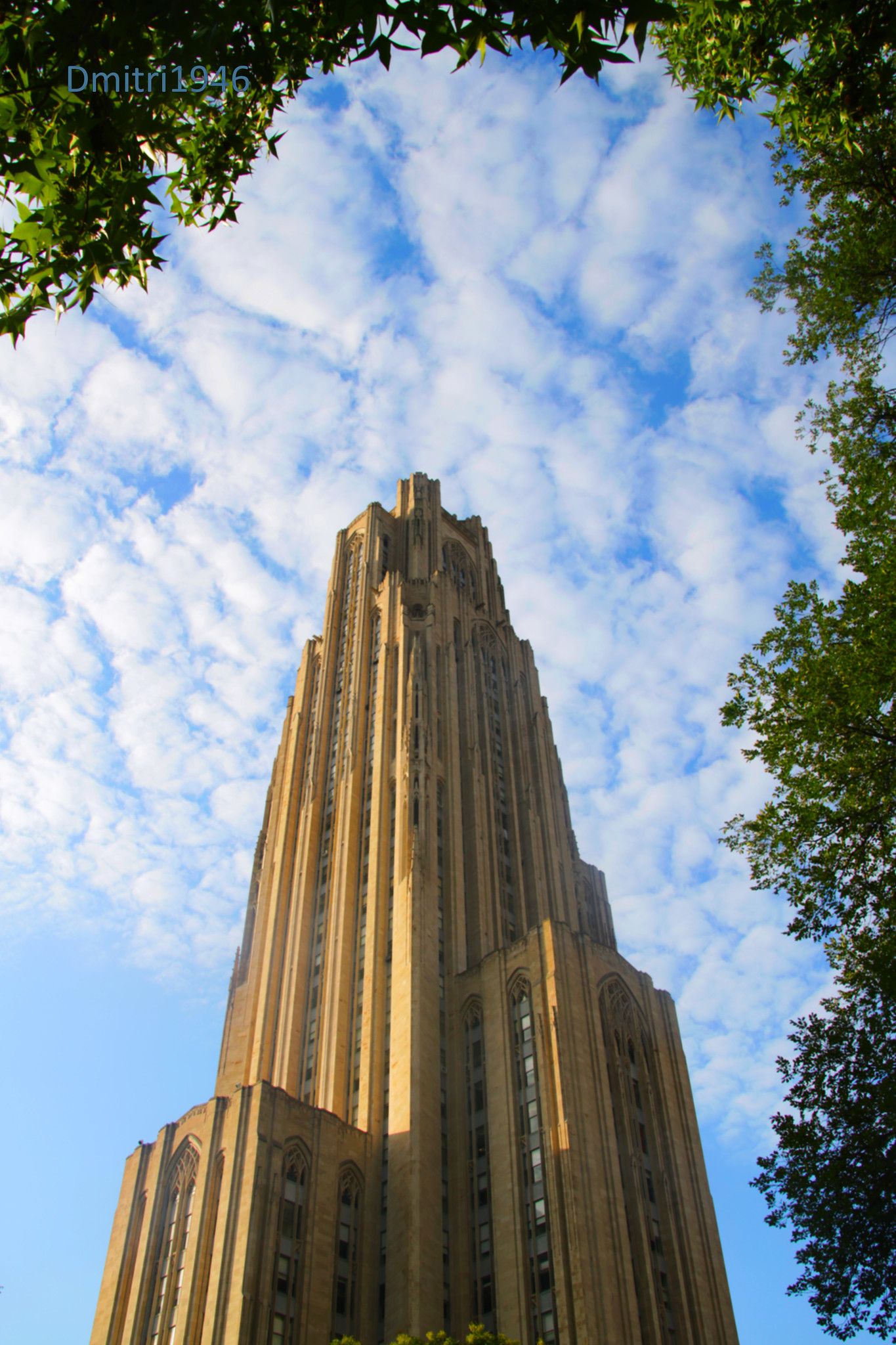 Jutting skyward on the University of Pittsburgh campus is one of the tallest educational buildings in the world, the Cathedral of Learning. The 2,000-room Cathedral was commissioned in 1921 and began hosting classes in 1931. In addition to the academic and administrative departments housed in this building, it contains over two dozen instructional spaces each designed to celebrate a different culture that had an influence on Pittsburgh’s growth, reflecting the significance of the city’s immigrant population. European states, through local organizing committees, were granted the opportunity to decorate “nationality rooms” in the post-war era. The Cathedral as a whole was a unifying project, but the distribution of classrooms based on new political borders in Europe formally divided Pittsburgh’s immigrants. “Each group had to form a Room Committee, which would be responsible for all fundraising, designing, and acquisition.”[1] Pittsburgh residents hailing from Austria-Hungary could be represented by the Czechoslovak Nationality Room (1939), German Nationality Room (1938), Hungarian Nationality Room (1939), Polish Nationality Room (1940), Romanian Nationality Room (1943), and Yugoslav Nationality Room (1939). (An Israel Heritage Room was added in 1987 and a Ukrainian Room in 1990). This method of division stands in contrast to that employed by the Cleveland Cultural Gardens, which apportioned spaces by ethno-linguistic cultures, rather than by country. 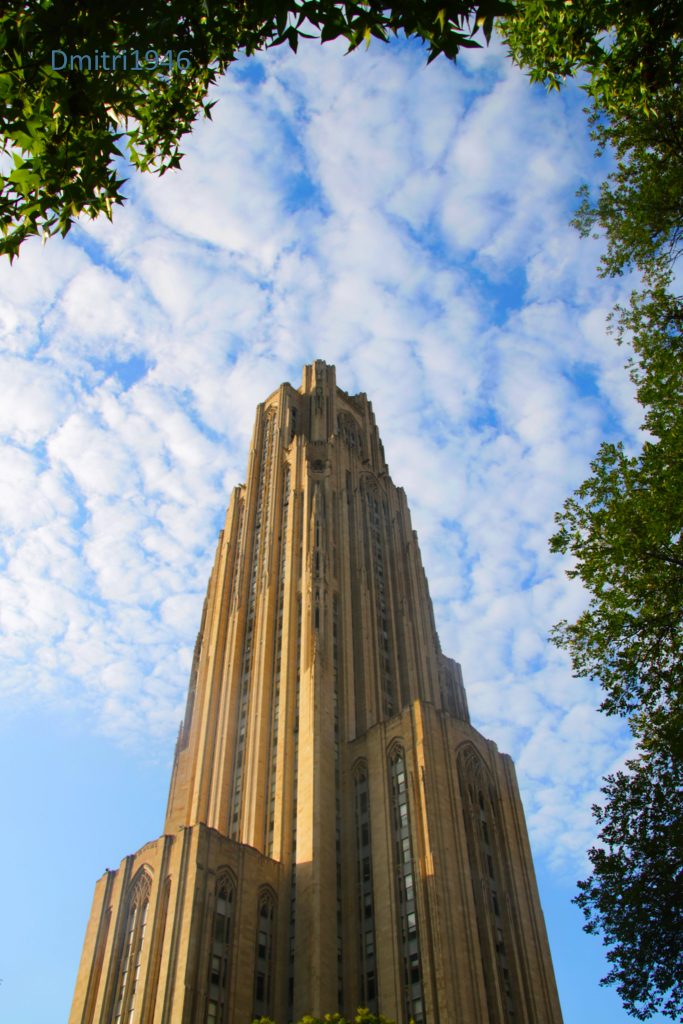 Austrians did not design a distinct space in the 1930s; the Austrian Nationality Room dates only to 1996. The Cathedral’s German Classroom, dedicated in 1938, reflected the architecture of the German Renaissance and celebrated Schiller, Goethe, and the Grimm brothers, nominally encompassing the city’s German-speaking Austrian immigrants but with no explicitly Austrian elements.  Decades later, the Austrian American Cultural Society, founded in 1978, changed this and served as the local room committee. Pitt Graduate School of Retailing professor Walter Sobotka had begun advocating for an Austrian Classroom as early as 1950 but it was almost forty years later that the university chancellor, Wesley Posvar, invited the AACS to serve as the Austrian Room Committee in 1987 and begin preparations to build the room. 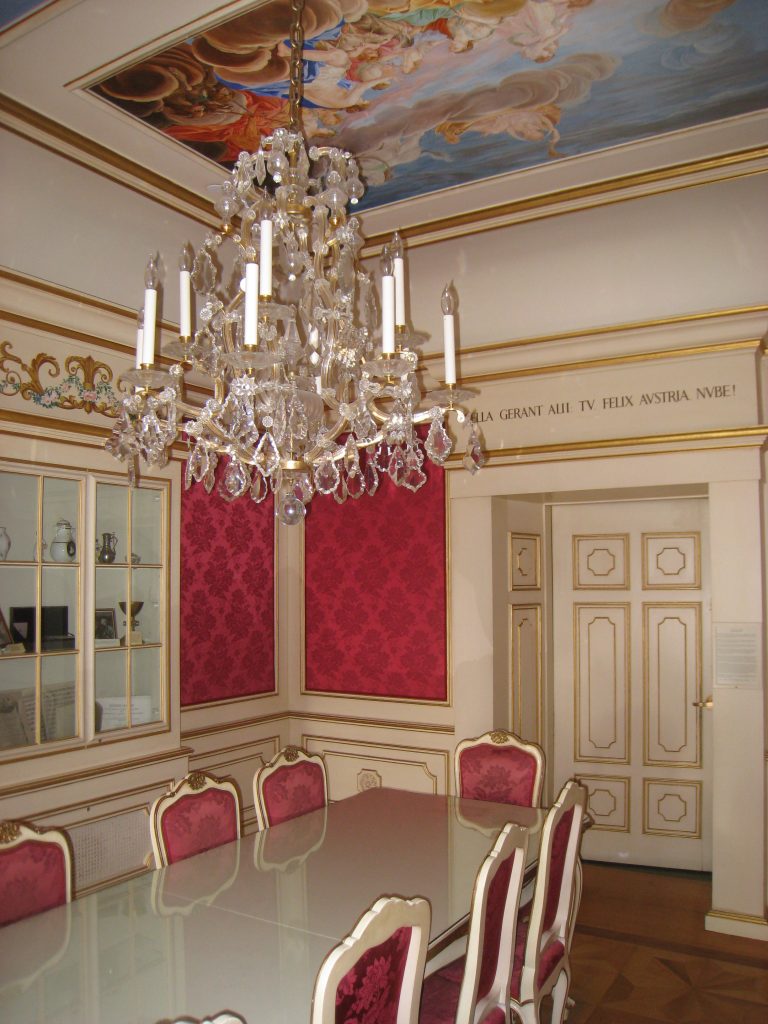 Among the many classrooms in the Cathedral featuring woodwork and folk art, the Baroque gilded white lacquer furniture and vivid red draperies of the Austrian classroom stand out. The Esterházy Palace in Eisenstadt, specifically its ornate Haydnsaal, was the inspiration for the Austrian Nationality Room. “When we speak about empires and post-colonial elements, . . . it’s very clear how the Austrian room is presented in relation to the others,” explains Pitt ethnomusicology professor Adriana Helbig. “I love teaching history from below in that room,” confirms history professor Marcus Rediker, drawing a contrast to the room’s imperial look. The exhibit space within the classroom emphasizes Austrian elite culture, specifically via classical music; Haydn’s 1797 “Gott erhalte Franz den Kaiser” is the tune to both the former imperial Austrian national anthem and University of Pittsburgh’s alma mater.[2] “It is one of the last Nationality Rooms designed as a seminar classroom,” notes the administrator of the Nationality Rooms Program, Cristina Lagnese; rooms added more recently, representing the global scope of immigrant cultures in Pittsburgh, are required to accommodate at least thirty students rather than smaller discussion seminars. 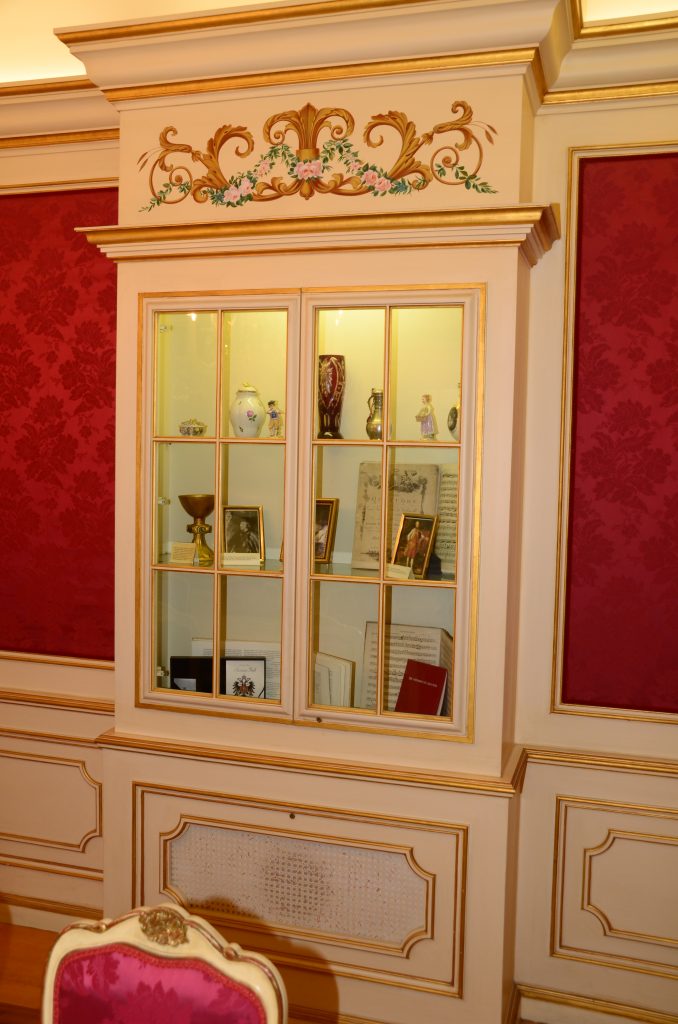 Cabinet in the Austrian Nationality Room

The planning and building of the room required transatlantic cooperation. The $250,000 of requisite fundraising came from individual and corporate donations in Austria and the United States alike. The fundraising and planning involved several Austrian ambassadors and consul generals posted in the United States in the 1980s and 1990s. Architects Franz Gerhardt Schnögass of Vienna and Gunther J. Kaier of Pittsburgh worked together to design the room. An Allegheny County firm completed construction work, whereas furniture was imported from Austria. After seventeen long years of planning and building, Room 314 opened in June 1996.

The Austrian Room organizing committee has since hosted lectures, concerts, and other events in the room. It has supported German-language courses, library acquisitions, publications, and study abroad opportunities for the university.[3] “The Austrian Committee has been generous with their scholarship fund,” Lagnese explains. “They award a $5,000 scholarship to a Pitt undergrad and another $5,000 to a graduate student.

The students who have been awarded have participated in study abroad programs in Graz where they learn comparative healthcare between the U.S. and Austria,” visiting hospitals, nursing homes, and pharmacies. Graduate students conducting research have studied Austrian philosophers, religion, and cinema. Thus, the Austrian Nationality Room and organizing committee are instrumental in the long-term work of supporting Austrian and Austrian-American studies on campus and for the wider Austrian community surrounding the Steel City. A 2014 YouTube video hosted by the university allows you to tour the room virtually, amid the current COVID-19 restrictions.[4] 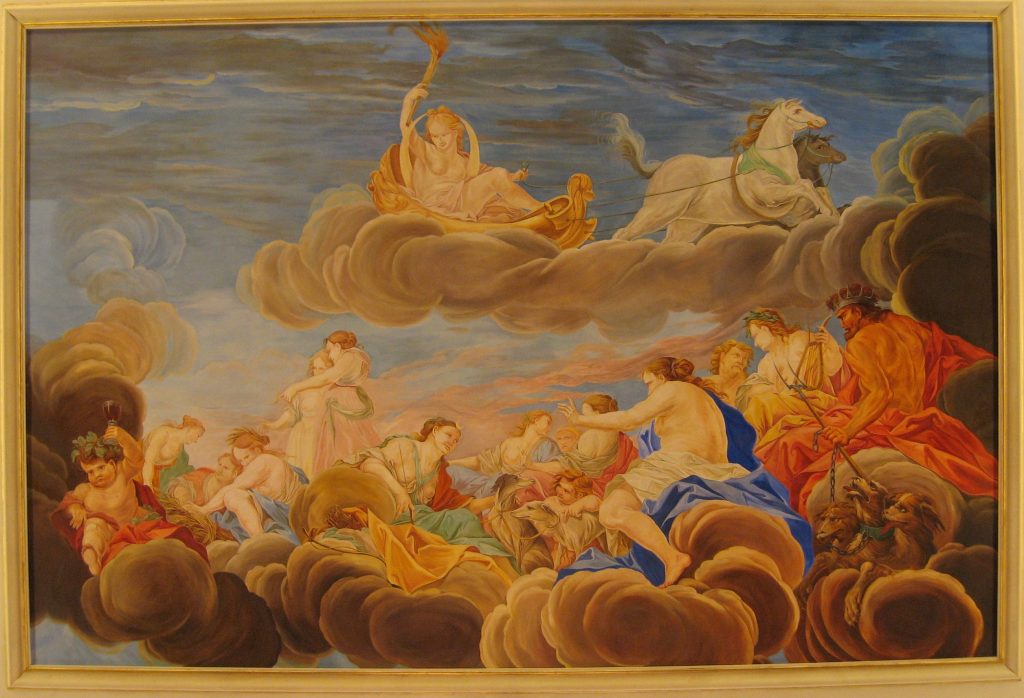 Detail of ceiling from the Austrian Nationality Room

Kristina E. Poznan, PhD, is a scholar of American immigration and foreign relations history. Her work examines the relationship between transatlantic migration, migrant identities, and separatist nationalism in the dissolution of the Austro-Hungarian Empire in the context of migration to the United States.  From 2017 to 2019 she was editor of Journal of Austrian-American History, sponsored by the Botstiber Institute for Austrian-American Studies and published by Penn State University Press.

[1] For an analysis of governmental participation in the creation of the Czechoslovak, Hungarian, and Romanian classrooms, see Zsolt Nagy, “National Identities for Export: East European Cultural Diplomacy in Inter-War Pittsburgh,” Contemporary European History 20 (2011): 435-453.

[3] “A Bridge from Vienna to Pittsburgh,” Austrian Press & Information Service in the United States (March-April, 2009), http://www.austrianinformation.org/march-april-2009/a-bridge-from-vienna-to-pittsburgh.html