Skip to content
Where is America? Remaking Central Europe, the League of Nations, and the New International Order 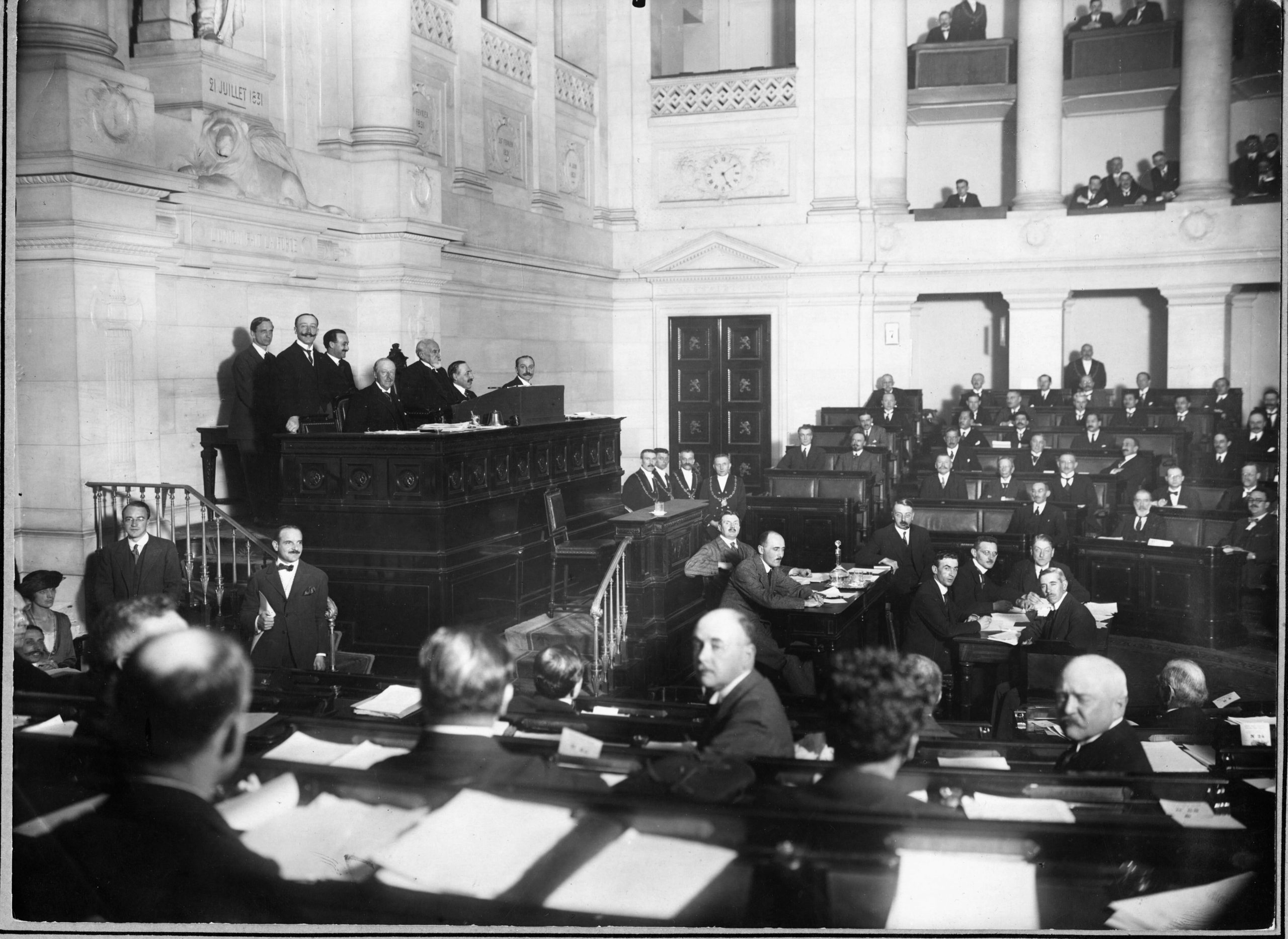 Where is America? Remaking Central Europe, the League of Nations, and the New International Order

By Peter Becker and Natasha Wheatley

In our book, Remaking Central Europe. The League of Nations and the Former Habsburg Lands,[1] we look at the ways in which the new political order in Central Europe after the end of the Great War was fashioned by national and international entities in close concurrence. The rationale for this edited volume was moving beyond the obvious, that is, the relevance of the Peace Treaties of Saint-German, Versailles, and Trianon for the reordering of Central Europe. The transition from a well-integrated economic space and from a probably less well-integrated political space to a coexistence of states, which defined themselves, preposterously, as nation states, was fraught with utopian expectations and, more importantly, with massive challenges.

These challenges could be found in the fields of politics (citizenship, minority rights), state organization (how to handle the legacy of the organization and public law inherited from the monarchy), state finances (how to divide public debt, how to best withdraw from the common currency area, how to rescue debt ridden states), economics (how to redefine regional divisions of labor into cross-border trade relations, access of traders and bankers to markets across borders, facilitation of cross border mobility), and infrastructure (how to divide up the rolling stock of the railway, the Danube fleet, and the telegraph network). New borders stretching out for several thousand miles could interrupt the flow of goods, people, and capital.[2] They were unable, however, to limit the spread of infectious disease.

To meet these challenges, bilateral negotiations were not sufficient, but the successor states were hesitant to enter into a more comprehensive regional collaboration. The League of Nations provided a political and technical platform to support this lengthy process of state building and economic collaboration. Looking at the role of the League in this field has been made possible by a refashioning of this institution during the last years. It has been identified “as the foundational moment of our contemporary global order: its innovations in international organization, international law, national and social rights, colonial governance, state making, financial coordination, and humanitarianism shaped the world we know today,” as we argue in our introduction.[3]

Austria was at the heart of this reconstruction project. Vienna was the center of finances and trade of the former monarchy; it was the site of many big corporations, which were active in several crown lands; it was the center of science and learning; and, finally, it was also the administrative center with a small army of public officials recruited to govern an empire. Vienna was a crucial nexus also in a network of provisions, which had already broken down by the end of the war–resulting in famine, lack of energy for transportation, industry, but also for domestic purposes.[4] Austria soon had to succumb to a breakdown of its state finances and was at the brink of collapse.[5]

The League of Nations was instrumental for restructuring Central Europe into a space where the successor states eyed each other suspiciously but managed to achieve a certain level of collaboration in the fields of economy and infrastructure. What was the role of the United States of America, then? Having abandoned a liberal thrust in foreign policy with the shift from the Wilson to the Harding administration, America was, officially, not part of the European reconstruction schemes until 1924, when the fallout from the Ruhr occupation and the reparations dispute with Germany required arbitration from the outside.

Looking closely into the remaking of Central Europe, we meet America and Americans on many instances and in various disguises. They provided relief in official mission as government agencies, supported humanitarian missions as philanthropic agencies, helped the governments of the successor states in putting infrastructure back on track as technical advisors, and offered hope to their Austrian peers for escaping the economic and political traps of the immediate postwar years as nodes within personal scholarly and cultural networks. On the level of the political imaginary, an undifferentiated idea of America was the reference point for futile hopes for financial and political salvation.

Public health was the policy field in which the presence of America was strongest. We can differentiate two different forms of presence. In the immediate aftermath of the Great War, Herbert Hoover arrived in Europe to establish a relief program built on American resources. Hoover was therefore, as Franz Adlgasser quoted Pershing, the “food regulator of the world,”[6] even though he was operating in close coordination with the Allies inside the Supreme Economic Council. The American representatives abroad used their privileged position within the inter-allied coordination efforts to actively engage in relief work in Germany, Austria, and the USSR.[7]

The Austrian representatives quickly realized the friendlier approach of the American government when they arrived in Berne in late November 1918 to negotiate about food relief. It was only the American representative, Wilson, who was ready to receive an Austrian delegate to start direct negotiations. They were haunted by the inability of Vienna to pay for food relief in hard currency[8] and this could be overcome only through an advance from President Wilson’s National Security and Defense Fund to Hoover’s ARA.[9]

Michael Burri’s analysis of the ARA feeding program for Viennese children starts at that point, where the report of the Austrian envoy to Berne, Haupt, ended: with the Allied mission to Vienna in early 1919.  Looking closely at the implementation of this program opens a new perspective on the dynamics of relief programs and on the multilayered connections between Austria and America.  Trust between American and Austrian actors was crucial. This created a privileged position for the Viennese pediatrician Clemens von Pirquet because of his strong ties to an American network of physicians, philanthropists, and government advisors. His participation provided the American relief organization with local knowledge and infrastructure – key ingredients for a successful relief program.[10]

When the United States abandoned a liberal approach to international relations and withdrew from official involvement in European affairs until 1924, intellectual networks and philanthropic agencies kept the American presence alive and crucial for desperately needed public health initiatives. Pirquet is one case in point, Ludwig Rajchman and the building of the League Health organization is another one. The Polish typhus epidemics, which started the international involvement with epidemic disease after the war, “led to major philanthropic relief missions from the United States and from western Europe.”.[11] 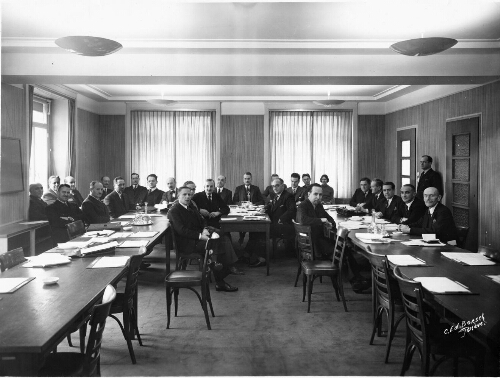 Hygiene Comite, 1920. Courtesy of the United Nations Archives at Geneva.

Sara Silverstein’s chapter on “Reinventing International Health in East Central Europe” presents an intriguing argument about the role of public health in state building efforts of the successor states, the relevance of networks, institutions, and norms inherited from the Habsburg monarchy, and the League of Nations as an institutional and intellectual hub. If we read her fine chapter together with the one by Katja Naumann, we can better understand the structuring from the Habsburg past, the coordination work done by the League, and the key role played by the Rockefeller Foundation with its funding strategies, which benefitted successor states like Poland, Czechoslovakia, Austria, and Yugoslavia directly and the entire region through the support of the League of Nations Health Organization.[12]

The Great War brought about a radical shift in global markets, international relations, and hegemonic powers. America grew into the dominant creditor and New York became the most powerful financial market. America was a key point of reference in the public finance crisis of the immediate postwar years. Austria is again a good case in point. The imminent collapse of its public finances, closely related to hyperinflation and a flight of capital from the country, prompted the government to seek rescue from the British and American financial markets. Public finance rescue missions in the interwar period were a complex challenge, where a new figuration of public and private actors became involved.[13] At a time when the Harding administration wanted to bypass European affairs as much as possible, American capital and, in the case of the Hungarian bailout, American experts were already involved.

The public finance rescue efforts provide an excellent starting point for a concluding reflection on the position of America in the remaking of Central Europe. The Allied military organization was built on multilateral coordination of production, transportation, and deployment. This experience was used by experts like Jean Monnet within the framework of the League, and by the American technical advisor Col. Causey within the Austrian government. The practice of embedding experts and their expertise in new institutional settings was used by the Rockefeller foundation as much as by Allied governments. This practice had a strong potential to support state building in the successor states, as the public health sector proves,[14] and the building of international collaboration within the framework of the League of Nations. American expertise remained sidelined in the latter effort, when the Harding administration stepped forcefully on the breaks of multilateral engagement.  This was a pity for many reasons. It prevented American project management, which was for many Europeans characterized by “efficiency, energy, and innovativeness,” as Frank Costigliola argues,[15] from shaping the newly crafted procedures of the League of Nations. At the same time, being kept away from the League and its cumbersome committee work meant that American experts were not socialized into the opportunities and limits of multilateral program development and implementation.

Peter Becker is professor of Austrian History and Head of the Doctoral School of Historical and Cultural Studies at the University of Vienna. He is editor of the open access journal Administory and editor, together with Natasha Wheatley, of Remaking Central Europe (2020). His research focuses on state-building and the transformation of statehood and on the biologization of the social from the late 19th to the late 20th centuries.

Natasha Wheatley is an assistant professor in the Department of History at Princeton University. Alongside Remaking Central Europe, she is the co-editor of Power and Time: Temporalities in Conflict and the Making of History (2020). Her article, “Central Europe as Ground Zero of the New International Order” was published in Slavic Review in 2019, and her 2017 article “Spectral Legal Personality in Interwar International Law” won the Surrency Prize from the American Society for Legal History.

Patricia Clavin, “The Austrian Hunger Crisis and the Genesis of International Organization after the First World War,” Internationale Affairs 90 (2014): 265-278.

See the film about the project: https://www.youtube.com/watch?v=b4898U0j2bM

[2] Cf. Quinn Slobodian, Globalists: The End of Empire and the Birth of Neoliberalism, Cambridge, MA: Harvard University Press, 2018, chap. 1. This observation takes up the catchy title of the first chapter: ‘A World of Walls’ (27). See also Natasha Wheatley, “Central Europe as Ground Zero of the New International Order,” in: Slavic Review 78/4, 2019), 900-911.