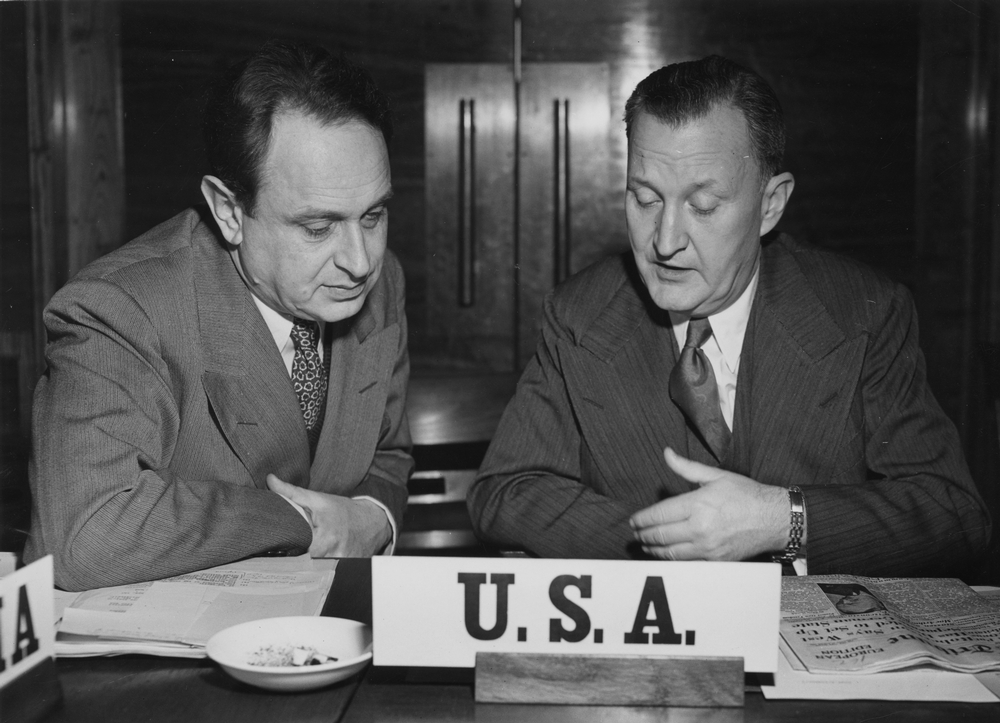 At a critical historical juncture following Hitler’s rise to power, an Austrian political scientist helped to coordinate a profoundly consequential intellectual migration to the United States. Walter Maria Kotschnig (1901–1985) was well-positioned to respond to the crisis of refugee scholars caused by the Nazi Reich’s law to “restore” the professional civil service, which went into effect in April of 1933 and led to the immediate dismissal of more than a thousand academics in Germany. At the time, Kotschnig was serving as general secretary of the Geneva-based International Student Service (ISS), and he was engaged in a global study of unemployment in the field of higher education and among the graduates of universities. In the crucial years preceding his own eventual emigration to the United States in 1936, Kotschnig served under High Commissioner James MacDonald as director of the League of Nations’ High Commission for Refugees (Jewish and Other) Coming from Germany. In his official capacities at ISS and at the High Commission, Kotschnig became an important negotiator between the various ad hoc committees that formed to find positions for the hundreds of displaced German scholars, many of whom would come to the U.S. to re-establish their careers. When the German crisis became a continental crisis with the Anschluss of Austria in 1938, many of the procedures and relationships that Kotschnig had worked to establish through the committees became the framework for the relocation of émigré scholars whose careers were terminated by the Nazi regime on the basis of their political identity as socialists, communists, or liberals, or because of their “racial” identity as “non-Aryans” or Jews.

Kotschnig was born in 1901 in Judenburg, Austria. He completed his Realgymnasium and university studies in Graz before taking a Ph.D. in political science in 1924 at the University of Kiel in Germany. In 1925, he joined the ISS, which had been founded during the war by the World Student Christian Federation as a student relief organization, and he became its general secretary in 1927. In 1932, Kotschnig received a grant from the Carnegie Corporation for an international study that would result in the 1937 publication of Unemployment in the Learned Professions.[1] In the intervening years, however, the crisis in Germany would require Kotschnig’s immediate attention, and he became a liaison between the several emergency committees handling the refugee crisis. The various committees coalesced in the spring and summer of 1933, and the most important among them were the Emergency Committee in Aid of Displaced German (after the Anschluss, “Foreign”) Scholars in New York, led by Stephen Duggan, director of the International Institute of Education (IIE); the Academic Assistance Council (AAC) in London, chaired by William Beveridge and directed by Walter Adams; and the Notgemeinschaft deutscher Wissenschaftler im Ausland in Zurich, the refugee scholars’ own “self-help” organization, led by Fritz Demuth after the brief tenure of founding member Philipp Schwartz.[2] These committees were financed largely by wealthy individuals, Jewish philanthropies, major international foundations including Rockefeller and Carnegie, and by voluntary taxes which sympathetic professors placed on their own salaries. Additionally, Alvin Johnson’s “University in Exile” at the New School he presided over in New York sought to reconstitute an entire faculty of exiled German social scientists; it would open in October of 1933 with a rapidly-assembled faculty of fourteen refugee scholars, officially as the Graduate Faculty of Political and Social Science.

In May of 1933, only weeks after the Nazis’ civil service “restoration” law had gone into effect, the scope of the crisis of refugee scholars was becoming clear. Kotschnig began corresponding with his counterparts in the international student exchange field, including Edward R. Murrow, the future broadcast reporter who was then assistant director of the IIE. Both men had been inundated with requests for help from German professors and students who were suddenly left with neither jobs nor prospects for future employment in their own country. Several prominent American philanthropists, foundation officers, and scientists who had heard that the IIE had a list of displaced German scholars contacted Duggan to arrange a meeting. They soon formed the Emergency Committee, with Cornell president Livingston Farrand as chairman but with Duggan as secretary, functionally the director. In a May 27th letter to American university presidents, the group announced its intention to assist the displaced German professors in securing “honorary chairs” with a term of two or three years, funded entirely from outside sources. By this strategy the Committee sought to avoid provoking resentment among unemployed or precariously-employed American professors and graduate students. The Committee acknowledged that the economic depression had strictly limited the resources of universities, and at the same time it provided them with the opportunity to extend invitations to world-class scholars in every field who had suddenly become available. Simultaneously in London, the AAC was being formed under the chairmanship of Beveridge, director of the London School of Economics, where a scheme of voluntary self-taxation had been initiated by a council of professors to raise money to establish temporary positions for the displaced German scholars.[3] The leaders of both the Emergency Committee and the AAC believed that the crisis in Germany would likely be temporary, and that it was crucially important to emphasize that the positions being created were extraordinary and not regular positions that would have gone to natives in normal times. They also emphasized that their mission was primarily to support the freedom of scholarly inquiry, and that the crisis in Germany was not exclusively a Jewish problem. In a letter of appeal for support, the AAC stated plainly that it sought help from all who were concerned about “academic freedom and the security of learning.”[4]

These committees were originally envisioned by their founders as emergency groups responding to a shocking political development, but the course of events demanded their continued existence: the Emergency Committee would not dissolve until the end of World War II, by which time it had directed grants for placement to 288 displaced European scholars, while the AAC, which had placed more than three hundred scholars in less than three years of existence, transformed into a permanent organization, the Society for the Protection of Science and Learning, in 1936.[5]

Walter Kotschnig was himself a veritable transatlantic nexus of the emergency refugee committees, including the Notgemeinschaft, the Emergency Committee, and the High Commission, which he would serve formally. When the crisis in Germany hit, Murrow immediately saw the need for a High Commission officer with the specific duty of placing refugee university teachers and all those members of the “free professions” who had been displaced by the Nazis’ law. Knowing that Kotschnig had a deep scholarly interest in the problem of unemployment in the professions, Murrow recommended him for the position. With the financial backing of the Emergency Committee, Kotschnig took on the job in the spring of 1934, determined to develop “a really efficient machinery for the permanent placing of intellectuals.” Of the roughly 1200 dismissed scholars, Kotschnig judged only about half of them as worthy of placement, a view generally shared among the officers of the refugee scholar committees. Kotschnig worked with the AAC to maintain up-to-date lists of the displaced German scholars for distribution among the committees, and he negotiated directly with the major foundations for support. Kotschnig maintained relations between the committees by traveling extensively between Geneva, the U.S., the U.K., Germany, and other European countries for meetings and lectures from 1934 to 1936. When the High Commission redirected itself to the purely legal matters of the refugee problem in 1936, Kotschnig resigned his position and took on the role as representative of the Emergency Committee and the Notgemeinschaft “in cooperation” with the AAC. Kotschnig took a two-month grand tour of the U.S. beginning in January of 1936 in order to educate the American academic community about the attack on the freedom of inquiry in Germany and to scope out opportunities for the refugee scholars. The tour met with mixed results; on some occasions he witnessed nativism and antisemitism, encountering some oblique comments, such as a request for scholars who were “only remotely Jewish.”[6]

By this time Kotschnig was beginning to believe that, in the long run, Austria would “return to the German fold,” and that there was no future for him there. In a sense, he too became a refugee scholar, and he began to look for a position for himself in the U.S., even while he was, as an Austrian, representing the “American point of view” of the Emergency Committee at meetings of the AAC in the summer of 1936. Finally, in June, he announced his imminent resignation from working on the German refugee scholar problem and his appointment as a professor of comparative education at Smith and Mount Holyoke colleges.[7]

Kotschnig would go on to serve a long career as a U.S. State Department official and representative at the United Nations, and he would publish many articles and several books on the relationship between national systems of education and their respective social, political, and economic outcomes.[8] He was, however, strangely unassuming about his work aiding the refugee scholars, both in his official capacity for the High Commission and informally after his emigration to the U.S., when he continued to write hundreds of letters on their behalf. “I do not know how many exiled scholars I have been able to place,” Kotschnig confessed in 1939. “As a matter of fact, I do not know whether I have placed a single one.”[9] Kotschnig’s humility, however, should not be regarded as an admission of failure, because his work during the critical period of 1933–36 established placement procedures and relationships between the various committees, the universities, and the refugee scholars themselves. Whether he could point to a particular placement that was his doing alone was really beside the point, because the networks he helped to create that made such placements possible were what truly mattered. When Hitler’s Anschluss of Austria extended the crisis to that country, Kotschnig’s work made possible the placement of a new wave of refugee scholars in the U.S., including 53 Austrians who sought assistance from the Emergency Committee.[10]

Joseph Malherek earned his Ph.D. in American Studies from George Washington University and has been a National Endowment for the Humanities postdoctoral fellow at the Consortium for History of Science, Technology, and Medicine. He was a Botstiber Institute for Austrian-American Studies Fellow in 2013-14, a Fulbright-Botstiber Fellow at the University of Vienna in 2017-18, and is currently the Botstiber Fellow at the Institute for Advanced Study at Central European University in Budapest.

Duggan, Stephen and Betty Drury. The Rescue of Science and Learning: The Story of the Emergency Committee in Aid of Displaced Foreign Scholars. New York: The Macmillan Company, 1948.

Friedlander, Judith. A Light in Dark Times: The New School for Social Research and Its University in Exile. New York: Columbia University Press, 2019.

Gemelli, Giuliana, ed. The ‘Unacceptables’: American Foundations and Refugee Scholars between the Two Wars and after. Brussels: P.I.E.-Peter Lang, 2000.

[8] Among Kotschnig’s books is Slaves Need No Leaders: An Answer to the Fascist Challenge to Education (New York: Oxford University Press, 1943), in which he argued that the crisis of unemployment had demoralized the middle classes and made them vulnerable to the appeals of National Socialism.

Photo credit to the Special Collections Research Center of the University of Chicago Library.