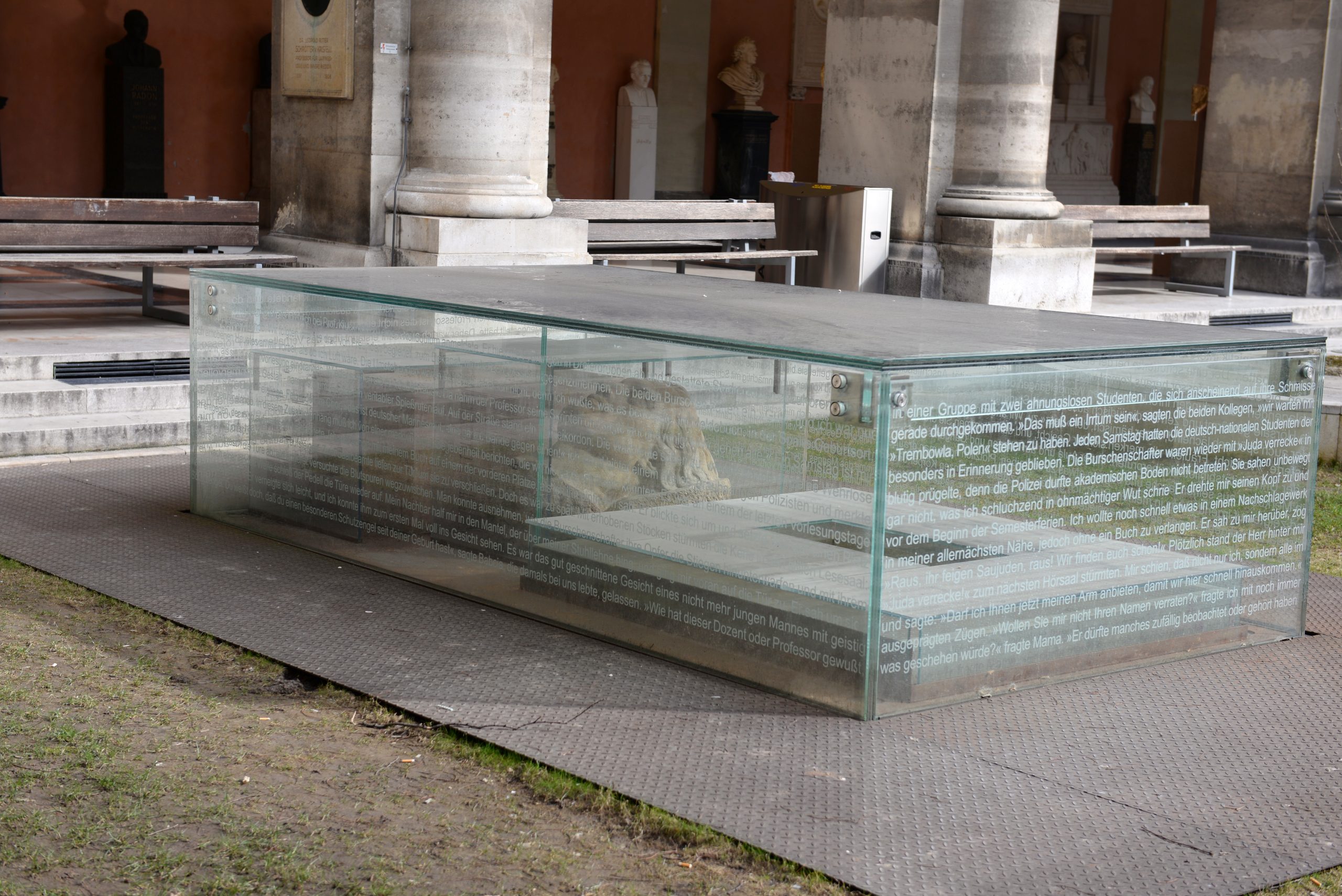 Leaving Siegfried Behind: Reimagining Monuments in Austria and the American South

The Past in the Present: Vienna and Chapel Hill, North Carolina

A solitary stone figure occupies a prominent space at the institutional heart of the university. The statue commemorates the lives, primarily of students, tragically cut short on the battlefields of a war that ended in defeat. The memorial testifies to the continuing significance of that lost cause; the figure’s presence allows that past to intrude constantly into the present, allows that past to insist on keeping its narrative and its problematic memory current for successive generations. Each generation, in its respective present, must wrestle with the legacy of the past for which the memorial stands, a past that becomes increasingly contentious over time, as times change.

This description applies to both statues I would like to explore in this essay. The first is the so-called Siegfriedskopf in its original placement in the entrance hall to the main administration building of the University of Vienna. The second is a monument that until recently used to stand on the campus of the University of North Carolina at Chapel Hill: the statue known as “Silent Sam.”  As a professor of German language and literature who specializes in medieval literature and its reception (Mittelalterrezeption), I must confess that the history of the American South has until now only remotely touched my scholarly consciousness. However, for almost 20 years I have lived North Carolina. I teach at Appalachian State University, a campus in the University of North Carolina system. The system’s flagship institution, the University of North Carolina at Chapel Hill, has drawn attention for demonstrations and controversy surrounding Silent Sam, a statue dedicated in 1913 to the students who died in the Civil War. During the Covid-lockdown of summer 2020, having had to return prematurely from a planned Fulbright semester in Austria and teaching a course at the University of Graz on the “American Middle Ages” from my home office in the Blue Ridge Mountains, I found the South and Austria colliding in unexpected ways.

Interestingly, I had not connected the Siegfriedskopf and Silent Sam until the events of June 2020 turned a bright spotlight on a third space: Monument Avenue in Richmond, Virginia, an opulent boulevard lined with memorials that represent the Confederacy’s “heroes.”  Photographs show, for example, how the monument to Robert E. Lee changed over the course of Black Lives Matter demonstrations. The ground around it became a colorful tapestry of signs and posters and people. Visitors sat on the pedestal with signs, musicians played impromptu concerts. The statue itself was covered with placards, posters, tape—colors, slogans, words, prayers, symbols—all of which communicated messages that counter the symbolism of the monument itself. These messages confront the history that the monument represents, inserting other (his)stories, lifting different voices. The images and words that enveloped the Lee monument, from “Black Lives Matter” to “peace” to the name “George Floyd” at least temporarily infused the cold stone of the past with the vibrant intensity of now. [1] 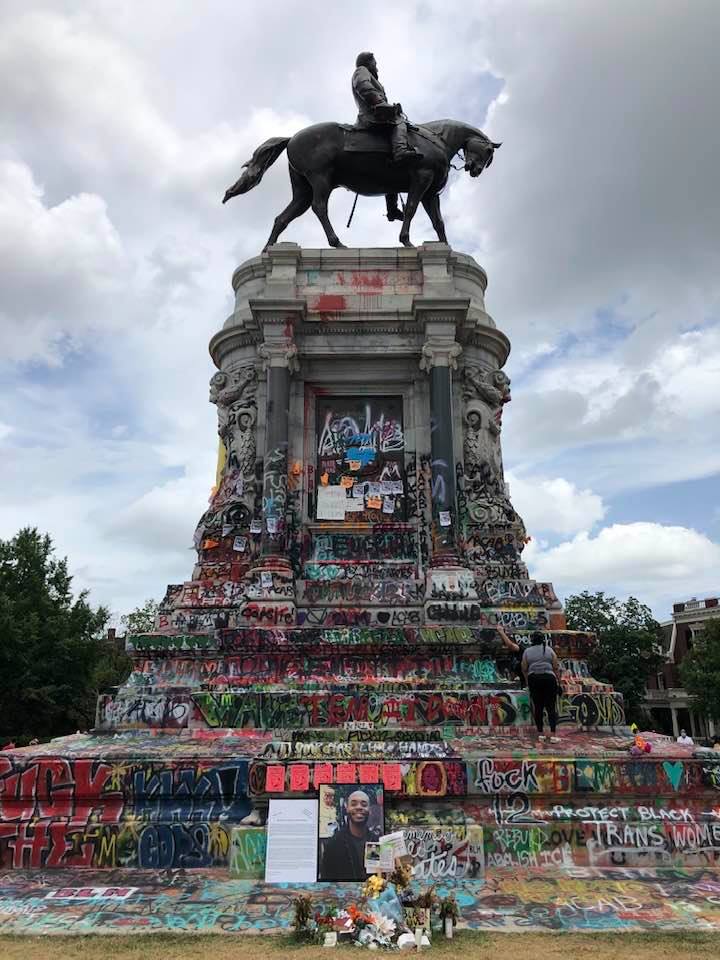 The spontaneous re-contextualizations of the Lee monument clearly show us the strength of different (his)stories demanding to be heard. This brings me back to the comparison I want to explore between the Siegfriedskopf and Silent Sam. Susan Neiman has suggested that monuments are “values made visible.”[2] Memorials literally embody “the ideals we choose to honor” and, in choosing to memorialize a historical moment, “we are choosing the values we want to defend and pass on.”[3] When we compare the recent fates of the two monuments, we can see that they illustrate the repercussions of difficult history within each community. The monuments clearly reflect the challenges and the values their communities wrestle with today.

Let me turn first to the statue known as Silent Sam. Silent Sam was dedicated at McCorkle Place on the campus of the University of North Carolina at Chapel Hill in 1913. The total ensemble reached a height of 17 feet: an eight-foot-tall figure of a young man in Confederate uniform stood atop a pedestal that itself was nine feet. Erected in 1913 and placed prominently at the main entrance of the University of North Carolina at Chapel Hill, the statue commemorated the 1000 students who fell in the Civil War fighting for the Confederacy. Like the statue of Robert E. Lee in Richmond, Silent Sam was part of the extensive building program supported by the Daughters of the Confederacy, a group that promoted the mythology of the South’s moral victory (the Lost Cause) in the American South and further entrenched racist attitudes in first half of the twentieth century.[4] Like the Siegfriedskopf, the statue of Silent Sam remained in its place of honor before the university’s doors for decades with the support of conservative legislators and alumni despite protests in the 1960’s. At the university’s doorway, the statue had become a fixture on the campus, a meeting point, a rallying point, and a flashpoint for controversy. In spring 2018, a UNC graduate student was arrested after having thrown red paint on the statue in an attempt to give it historical context and to challenge the white supremacy it represents.[5] In August 2018, in an increasingly tense situation, the statue was pulled off of its pedestal on the day before classes were to begin for the fall semester. Although the statue was eventually removed from the site and transferred to an undisclosed location, the university recommended keeping Silent Sam on the campus. The university cited a North Carolina state law from 2015 that prevented the removal of “objects of remembrance” from public property, although the state governor indicated the statue could be moved if it were a matter of public safety.[6]  Tensions escalated, and protests continued in December 2018. In January 2019, the chancellor of the university approved the removal of the statue’s pedestal and other remnants, and then the chancellor resigned shortly thereafter. By the end of November 2019, the University of North Carolina Chapel Hill had agreed to a $2.5 million settlement with the North Carolina division of the Sons of Confederate Veterans; the group would use the settlement to preserve the statue by displaying it in a facility as yet to be planned and built.[7] The decision sparked a backlash and a series of legal challenges that eventually led the same judge who had approved the settlement to overturn it and thereby reverse the original decision.[8] As the statue currently remains in storage, the question of its fate remains unresolved.[9] After standing in such a prominent position to watch over the campus in Chapel Hill, Silent Sam has rather unceremoniously disappeared from view. 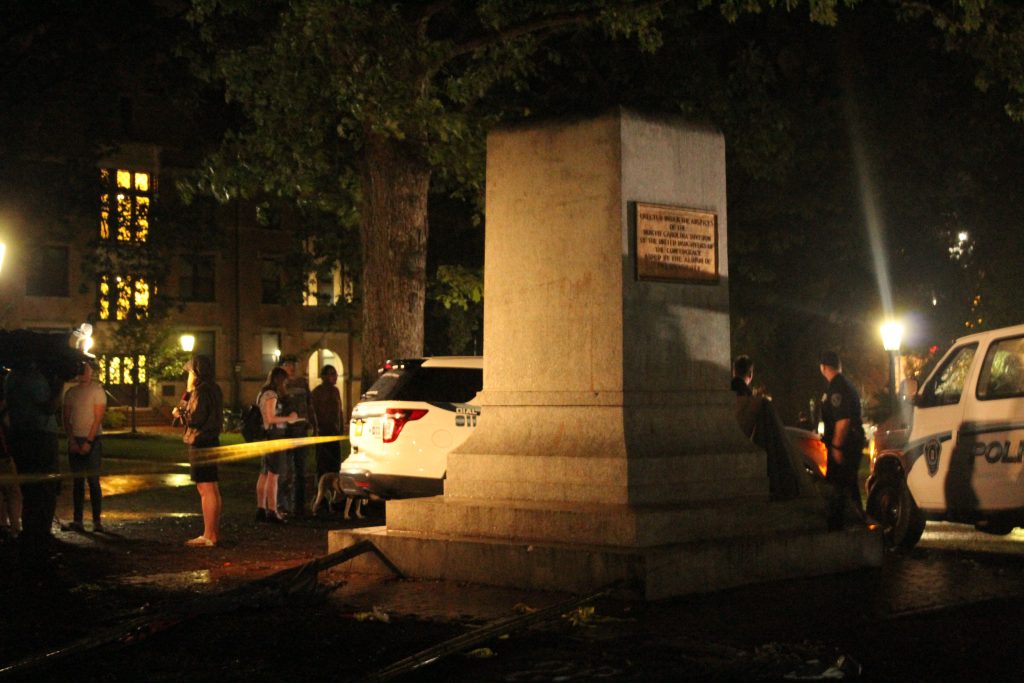 The Siegfriedskopf: The University of Vienna

Like Silent Sam in Chapel Hill, the Siegfriedskopf no longer occupies its original location in the university’s entrance hall. Unlike Silent Sam, however, the Siegfriedskopf has not vanished. On the contrary, rather than remove it entirely, the university decided to incorporate the monument into a twenty-first century statement affirming tolerance and condemning prejudice and violence.

The sculpture known as the Siegfriedskopf was dedicated to fallen heroes of the University of Vienna (“den Gefallenen Helden unserer Universität”) during WWI. From its unveiling on November 9, 1923, until 2006, it resided in the university’s central entrance hall as a towering symbol of anti-semitism. In 2006, the sculpture was finally moved from its location to the arcaded courtyard or Arkadenhof. Christoph Gnant suggests that the Universities Act of 2002 played a significant role in giving the university the autonomy it needed in order to “consciously face up to its historical responsibilities.”[10] The Siegfriedskopf had been a source of contention for decades: a meeting point for nationalist fraternities and student groups, a magnet for both the Right (attraction) and the Left (repulsion). Following a proposal made during the memorial year 1988 to commemorate the victims of the Nazi era by a memorial plaque in the Aula, the university senate decided in 1990 that the Siegfriedskopf be moved into the arcaded courtyard. A plaque was to be installed in the entrance hall which would serve as a memorial for “the victims of war and violence with genuine grief.” (Gnant 266)  Progress on moving the sculpture stalled due to protracted debate in politics and in the media, to objections from the Bundesdenkmalamt, and to technical problems involving the actual physical transfer of the monument from one location to another. It took an act of vandalism in 2002, an auspicious anniversary, and a renewed commitment by the university administration before the hitherto unfulfilled mandate was finally carried out. 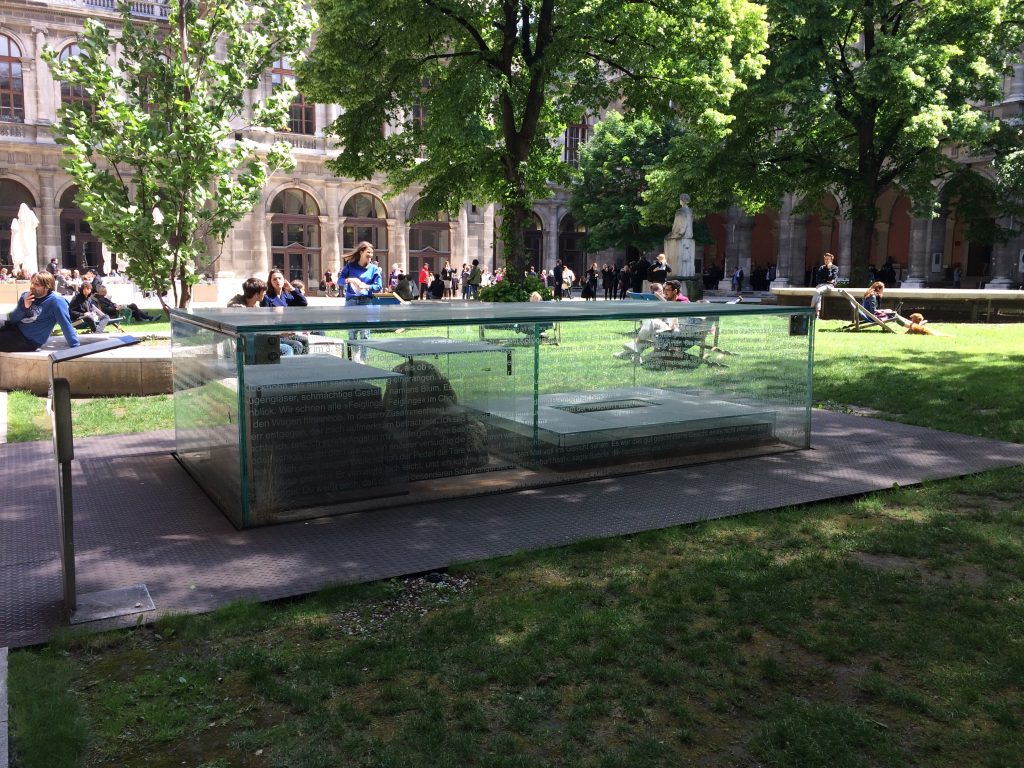 The monument was not only moved; it was reimagined and recontextualized in an innovative concept designed by the studio of Bele Marx and Gilles Mussard (Büro Photoglas). The artists offer an extensive description of their work with textual references in their publication (“Kontroverse Siegfriedskopf”).[11] A short summary will suffice here. In a critical move, the new installation dismantles the previous sculpture into its three parts: the head, the pedestal and the plinth. Text dominates the monument now, covering the transparent cubes that encase the three original pieces. When I first saw the Siegfriedskopf in May 2019, I walked around the monument’s grassy plot near the covered walkway lined with busts of famous scientists and university elite. I found myself frustrated because I could not clearly see the image of Siegfried’s head to take a picture–only to realize that, of course, this is the point. The medium here is the message, to coin a phrase: in the new installation, the words obscure the images. Thus, the sculpture now expresses clearly what had previously been unsaid and unacknowledged. Words have been weapons; they have obfuscated, manipulated, injured—and the Siegfriedskopf only served to amplify those messages. Now words cover the images, literally recontextualizing them, and those words are then in turn encased in yet another story. The head has text from articles in the Arbeiter-Zeitung from October and November 1923 regarding Hakenkreuzterror