Skip to content
Transatlantic Academic Cooperation in the Interwar: James T. Shotwell and the Austrian and Hungarian Series of the Carnegie Endowment’s “Social and Economic Consequences of the Great War” 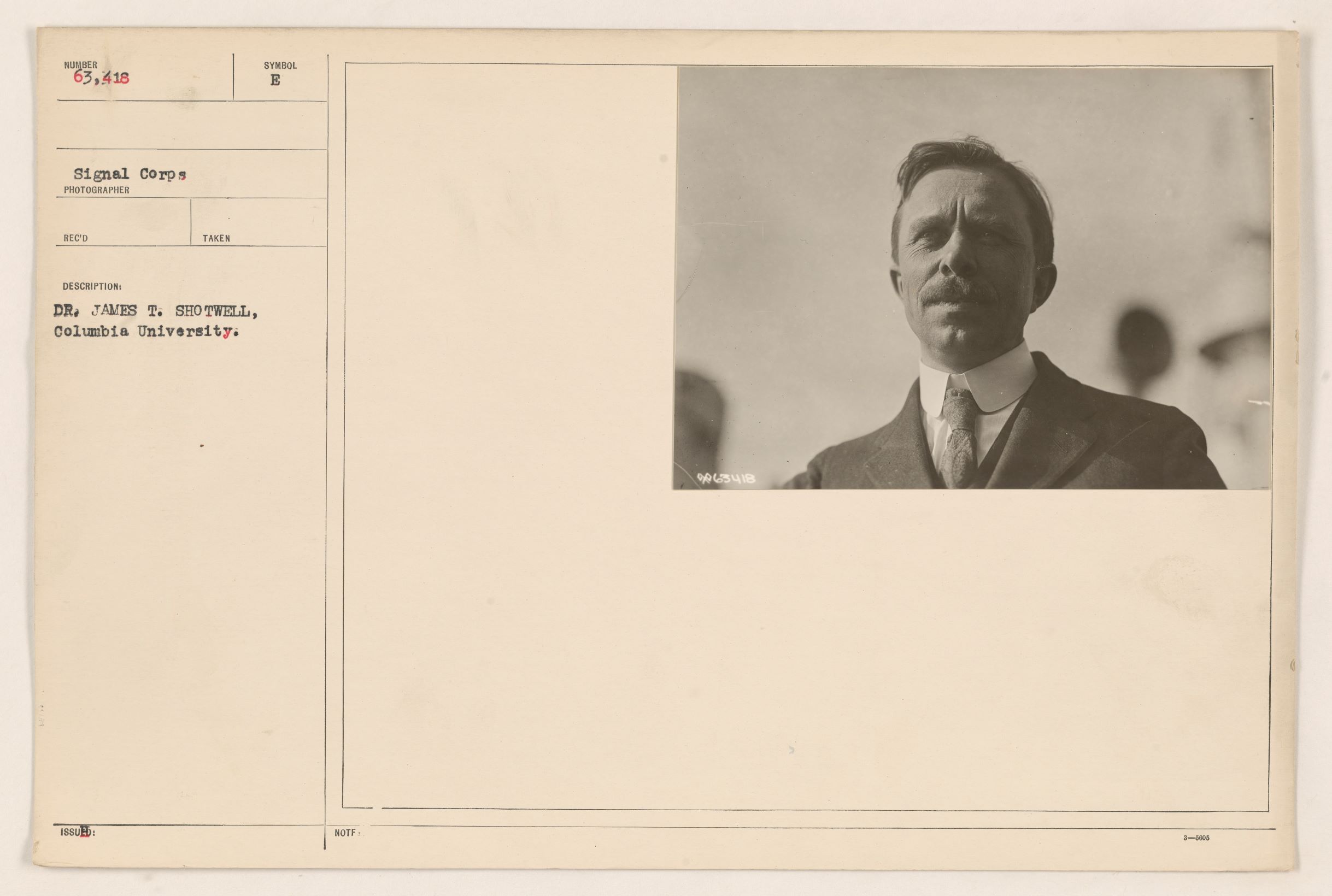 Transatlantic Academic Cooperation in the Interwar: James T. Shotwell and the Austrian and Hungarian Series of the Carnegie Endowment’s “Social and Economic Consequences of the Great War”

Columbia University historian James T. Shotwell began his project of publishing an international series on the social and economic consequences of the Great War when he became the director of research for the Carnegie Endowment for International Peace in 1917. He proposed an alternative historiography.[1] Shotwell’s publication plans were not the Carnegie Endowment’s first such undertaking. The Balkan Report of 1914 examined the causes of the two Balkan wars (1912/1913) by ‘concentrating on destruction and suffering of warfare, rather than martial glory,’ as historian William Mulligan has noted, and to ‘shame the belligerents and reinforce the rules of war.’[2] For the Great War undertaking, Shotwell sought to focus on the consequences rather than to publish a history of the war. While reports on the Balkan Wars tended to present readers with the perspectives of the non-belligerent states, Shotwell planned to engage authors from all major belligerents.[3] Authors from victorious and defeated powers were to address the same topics, including economy, labour, governance, and public health. 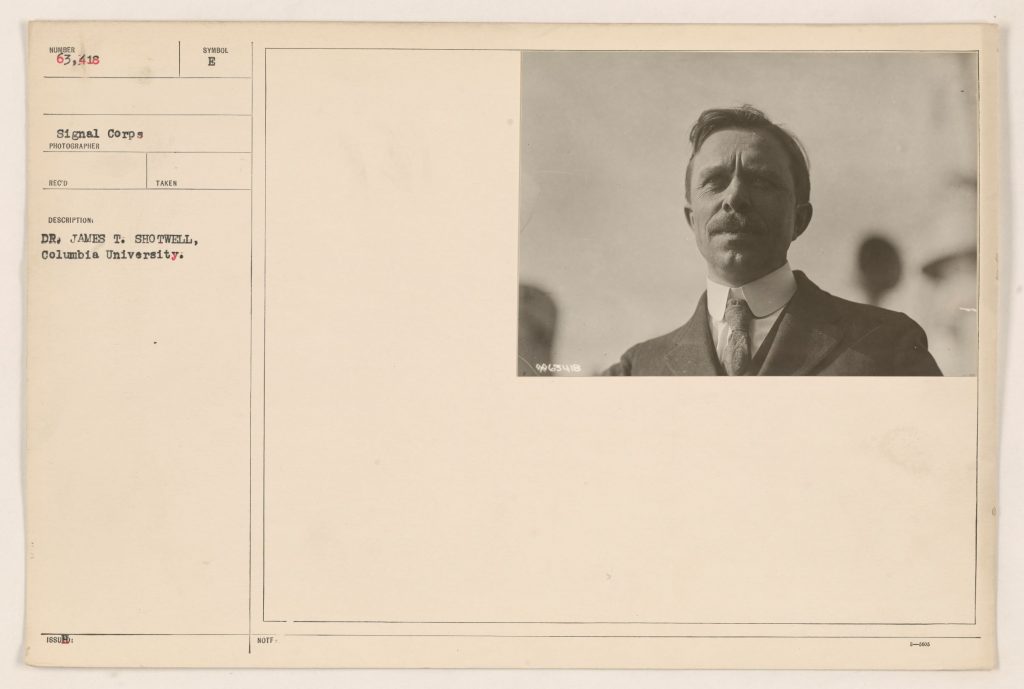 The organizational work to cover the former Habsburg lands challenged Shotwell. Starting in early November 1918, new states formed entirely or partially from former Habsburg lands–or already existing neighbouring states incorporated parts of them. These included (German) Austria, Czechoslovakia, Hungary, Italy, Poland, Romania, Ukraine, and the Kingdom of Serbia, Croatia, and Slovenia (from 1928, Yugoslavia). Not all borders were quickly settled, and in the early post-war years, violent conflicts occurred in the region.[4]

Shotwell’s correspondence with both the Carnegie board in Washington, DC, and with the national series’ editors, reveals that he expected nationalist antagonisms among editors and authors dealing with the war and its consequences. Shotwell’s main contact for the former Habsburg lands was Austrian economist Friedrich Wieser, who resided in Vienna, the former imperial capital where most of the sources were located. Shotwell chose Wieser as the sole editor for an Austro-Hungarian Series. While Shotwell considered a joint Austrian and Hungarian series, he never thought of subordinating the other former parts and nationalities of the Habsburg lands to the Viennese office (such as the Czechoslovakian series.)

The Austrian and Hungarian Series’ Editors, Authors and Structure

Shotwell incorporated the complex Austro-Hungarian state system. Since the settlement (Ausgleich) of 1867, the Habsburg lands knew two different constitutions and parliaments, a division that has also influenced the war effort. The complexity figured in the structure and naming of this “national” series. After years of negotiations between Shotwell and Wieser, the series was named the Austrian and Hungarian Series. It consisted of four sections: the Austro-Hungarian section, the Austrian section, the Hungarian section, and the one dealing with public health (Volksgesundheit).[5]

Initially, Wieser was designated to be the main editor for an exclusively Austro-Hungarian Series. Correspondence indicates this was never designed as a political statement, neglecting or underestimating Hungary’s role within the empire or in the war.[6] In addition to Wieser, Richard Schüller, a high-ranking civil servant and the Austrian delegate to the League of Nations in Geneva after the war, and Richard Riedl, Austrian envoy to Berlin between 1921 and 1925, served as editors. Gustav Gratz, the Hungarian editor, was a former delegate to the Hungarian parliament, a short-term Hungarian minister of finance, and the first Hungarian envoy to Austria in 1919-1921. The internationally renowned physician Clemens von Pirquet headed the public health section. The editorial office for all sections was located in Vienna and headed by Wilhelm Klastersky, a bureaucrat from the Austrian president’s office.

The decades-old Austrian and Hungarian antagonism survived, but not between the editors, Wieser and Gratz. Rather, complaints originated from outside the editorial board. In March 1925, Shotwell informed his secretary about a complaint made by one of the Hungarian authors, István Szechenyi: “With reference to the comment [made by Szechenyi] that the editorial board for Austria-Hungary [!] has four Austrians to one Hungarian, I would point out that the complicated machinery of the Austrian monarchy centering at Vienna during the War called for just this proportion of specialist control.”[7] The Hungarian Series never exceeded five authors, while Austrian authors made up about 50. There were practical reasons why the number of Austrian authors was extraordinarily high. One was simply that many of the Austrian or Austro-Hungarian publications turned out to be volumes instead of monographs. Gratz’s lack of engagement was the second reason why the Hungarian series had fewer publications. The correspondence indicates that the Viennese-based editors, in particular Wieser and Klastersky, spent much more time and effort on the project.

Access to archives and records was probably a decisive reason for engaging particular authors from Austria, even when their scholarly quality was questionable.[8] This prioritization was apparent for all Carnegie series, as Jay Winter and Antoine Prost have recently demonstrated.[9] The historian Jay Winter recently described the Carnegie series’ authors as follows: ‘Most of these tomes were penned by men who helped run the war or who had to deal with its aftershocks. This first generation was also composed of men whose memoirs went over the ground again for evident purposes of self-justification.’[10] Possible authors had to meet two main criteria: firstly, being capable of working in a scholarly manner to ensure a good quality of manuscript, and secondly, having held decisive positions during the war in order to be able to provide enough insight.[11] Most of the peer reviewers’ critiques of submitted manuscripts of the Austrian and Hungarian Series did not center around nationalist interpretations, but instead provided such comments as ‘rather dry Kanzleistil’, and ‘does not reflect the idea of peace (Friedensgedanken)’.[12] However, Shotwell and his peer reviewers found nationalist tones, as well as anti-Hungarianism and anti-Austrianism, in most of the manuscripts.

Perhaps the most prominent example of anti-Hungarianism was Joseph Redlich’s later widespread book, published both in German (1925)[13] and English (1929).[14] Joseph Redlich was an internationally renowned professor of law at the University of Vienna. In 1913, he became a member of the Carnegie commission studying the Balkan Wars. As a former delegate to the Austrian parliament, he was designated to write about Austrian prewar and wartime politics. Regarding Redlich’s submitted manuscript, however, Shotwell expressed severe concerns: ‘The only doubt which remains in my mind is as to whether some of the references to Hungary should not be somewhat toned down.’[15] The published version was certainly toned down, but Redlich still offered comparisons of the Austrian home-front government with the Hungarian, and claims it was similarly authoritarian and restrictive.[16]

On the other hand, the most conspicuous example for anti-Austrianism was Albert Apponyi, who wrote on the same topic as Redlich. Apponyi had headed the Hungarian delegation to the Paris Peace Conferences. In September 1922, Wieser, Gratz, and Shotwell were already deliberating the outcomes of this particular peer review process. One of the reviewers (named only as ‘D.M.,’ but most likely David Mitrany) commented: “The writer repeatedly tries to justify this point of view with the offensive argument, commonly used in Hungary, that the surrounding peoples are of inferior quality […] By general scope and tone belongs to genus pamphleteering […].”[17] Apponyi was not informed of the review results in due course as the editors postponed a decision.[18] Shotwell was well aware of the delicate situation into which he brought Gratz, who in the end had to inform the author. In his memoirs, Gratz commented on his work as editor of the Hungarian series briefly. Within this, he mentioned that the Apponyi manuscript was rejected.[19]

This Austrian and Hungarian series also offers an insight into scholarly work and academic cooperation in the 1920s as it reveals editors navigating a post-war environment of national animosities. Although planned differently, most books resulted in a wartime focus. The books’ prices probably showed the economic consequences of the war even more clearly than did their contents. Carnegie books ranged from 300.000 to 1.000.000 crowns before Austria introduced the Shilling in 1925 to end inflation.[20] More than once Shotwell emphasized that some volumes and books sold only handful of copies annually.

Tamara Scheer is a lecturer at the Institute for East European History at University of Vienna, and Director of Historical Collections at the Pontifical Institute Santa Maria dell’ Anima in Rome. She is currently completing her fourth monograph, a study on language diversity and loyalty in the Habsburg army, 1867-1918. In 2019, she published her first book for a wider audience: “Von Friedensfurien und dalmatinischen Küstenrehen: die vergessenen Wörter der Habsburgermonarchie” (Amalthea).

The author is grateful to the Austrian Science Fonds (FWF)/Hertha Firnberg Grant T-602, and the Austrian Cultural Forum New York for having supported the research at Butler Library/Columbia University.