The U.S. government’s World War II Manhattan Project benefitted from the work of several scientists born in Austria-Hungary, from physicists to chemists to mathematicians. Elizabeth Rona, Leó Szilárd, Edward Teller, John von Neumann,[1] and Eugene Wigner were all from Budapest, George Placzek from Brno, and Stanislaw Ulam from Lviv. Among those born in Vienna were Victor F. Weisskopf and, most significantly for our purposes, Otto Robert Frisch.

Frisch arrived in the United States to work on the Manhattan Project in Los Alamos in 1943, a secret wartime effort to develop the first nuclear weapons before Germany. He came to the southwest as part of “British Mission” cohort of scientists (Frisch had hurriedly been made a British citizen to participate). Frisch’s scientific work had already taken him from Vienna to Germany, Denmark, and England before the United States, including the laboratory of his renowned aunt, Lise Meitner, with whom he theorized the fission of uranium. Although Frisch returned to Europe in 1946 after the war, his three years in New Mexico are indicative of the extensive contributions of Austro-Hungarian scientific training to Allied victory in World War II.

Los Alamos had formerly been the site of a private boys’ “ranch” school, nestled “among steep-walled canyons accessible only by one rutted road; as isolated a place as one could wish for the most secret military established in the U.S.A.”[2] The laboratory’s nearest neighbors on the Pajarito Plateau, north of Santa Fe, were Bandelier National Monument and the San Ildefonso pueblo, home to Puebloan peoples for centuries but whose population had been decimated by colonization and, more recently, the 1918 influenza pandemic.[3] Frisch recalled lodging in one of the original ranch school buildings, “a magnificent blockhouse which was traditionally built from big treetrunks . . . the quarters for bachelor scientists.” With his new location came a new moniker: “The place was lousy with people called Robert, such as Oppenheimer, Bacher, Server and a number of others,” Frisch explained. On the spur of the moment he replied “Otto” when asked his name, “although I had never been called that in my life.” [4] Now Robert Frisch was known instead as Otto to all his Manhattan Project colleagues. 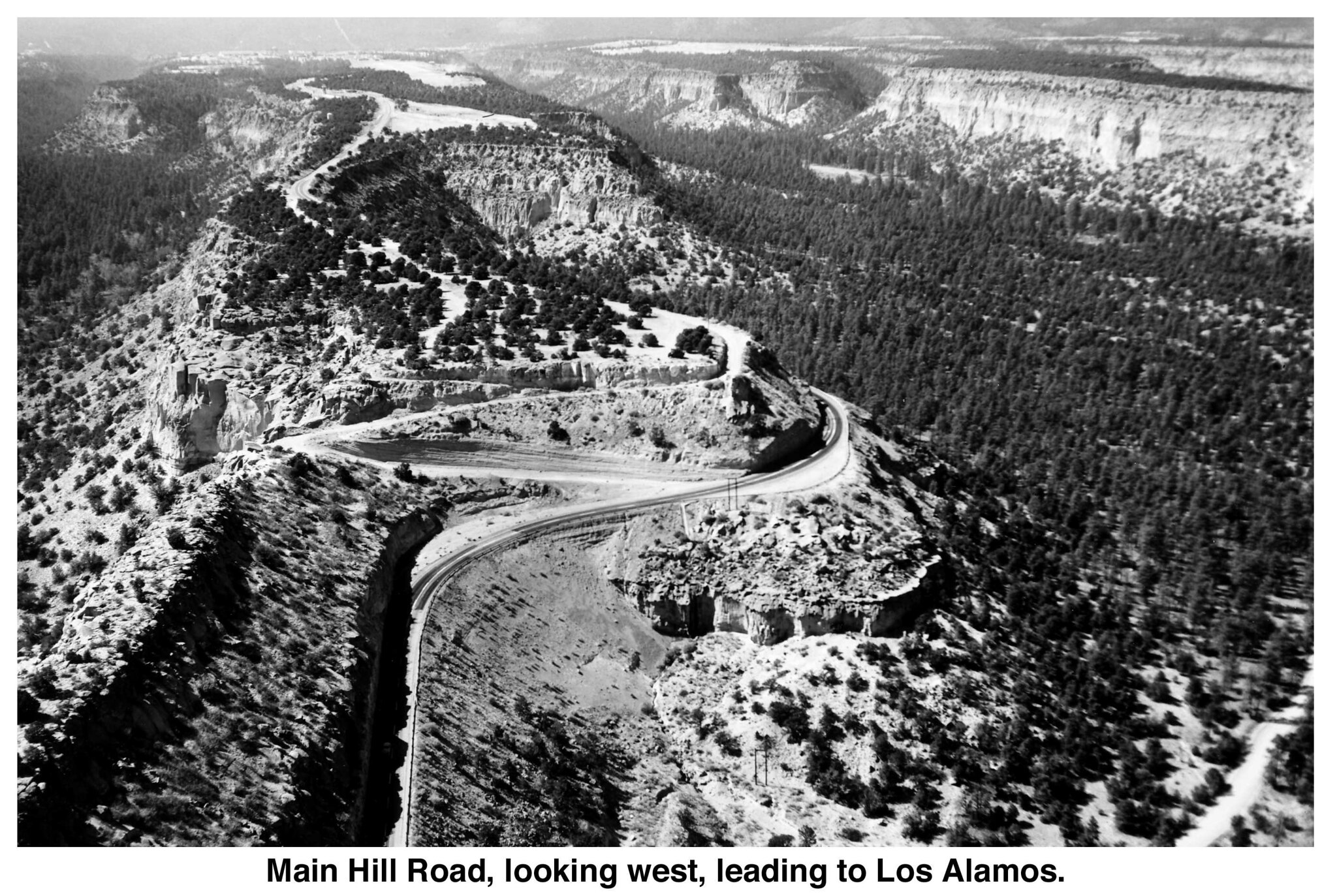 Robert Oppenheimer directed “Project Y,” the branch of the Manhattan Project operated by the University of California in Los Alamos, which focused on bomb design and the physics of detonation. “The purpose of Los Alamos,” in Frisch’s words, “was to bring together the mathematicians, physicists, chemist and engineers who would . . . design and test all the many devices required for . . . an explosive unit in which the chain reaction, trigged by a single neutron, would grow with lightning speed.” Everyone secretly brought to “the Hill” was there to work. Frisch recalled that he worked “seventeen hours a day” and slept only “from dawn till mid- morning.”[5] Colleagues confirm the long hours and Frisch’s devotion. “Quite often you came back after dinner and continued work in the lab,” Jay Wechsler recalled. Even during the Saturday night dances, Frisch’s mind was elsewhere: accurately determining the exact amount of enriched uranium required to sustain a nuclear reaction. “Otto would come up to me during one of the breaks and say, “We’d better go back to the lab after the dance. I’ve got an idea.” Wechsler groused, “This meant going back to the lab at one o’clock in the morning.” [6]The Critical Assemblies group, which Frisch led, built on the work he had conducted in England with Rudolf Peierls. The Frisch-Peierls Memorandum (1940) explained the process for generating an atomic explosion, an essential precursor to the Manhattan Project’s work.[7] By 1945 the laboratory produced a plutonium implosion bomb, called Fat Man, tested at the Trinity Site in southern New Mexico, and a gun-type uranium bomb, called Little Boy.[8] 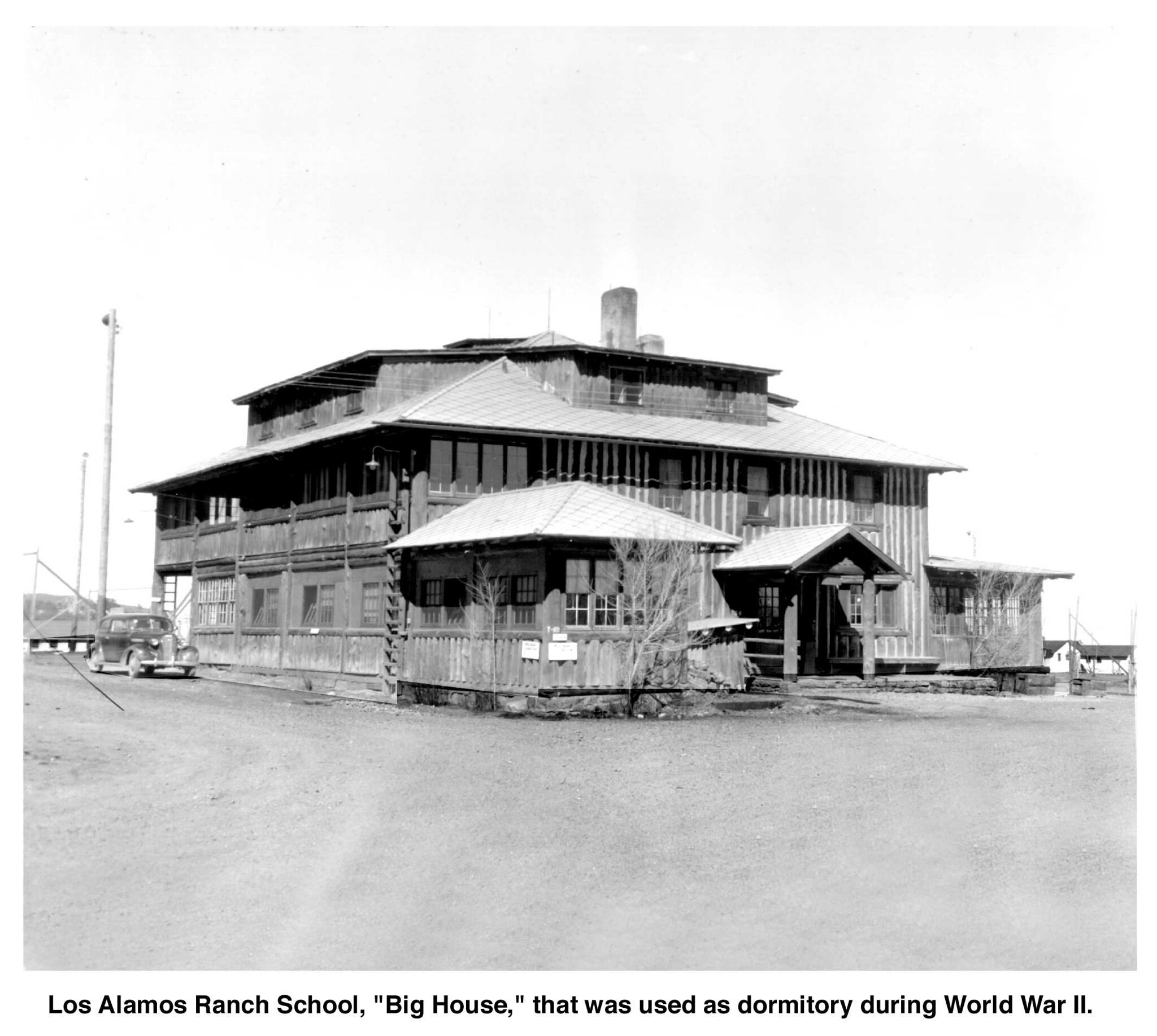 Oppenheimer’s vision called for scientists to work hard and collaborate to create immense discoveries, free from the distractions of university life but facilitated by the natural splendor of northern New Mexico and each other’s brilliant company. Frisch evoked the ambience: “I had the pleasant notion that if I struck out on any evening in an arbitrary direction and knocked on the first door that I saw I would find interesting people inside, engaged in making music or in stimulating conversation. I have certainly never seen a small town with such a variety of intelligent and cultured people.” Oppenheimer himself hosted parties, encouraging casual conversation between notable scientists, martinis in hand. Dinner parties in other homes often featured Frisch at the piano, a colleague on the violin, and hosts bringing out platters of food.[9] Frisch’s musical contributions were widely appreciated throughout the town. “Otto Frisch played the piano beautifully,” gushed Dorothy McKibbin, the “gatekeeper” of Los Alamos, who oriented arriving Project Y personnel.[10]  Scientist Anthony French remembered that Frisch, “after breakfast in the Fuller Lodge, . . .  would tend to sit and play the piano for quite a long time. I sometimes wondered when he got his work done.”[11] Owing to his skill, Frisch played a weekly 15-minute spot of piano music on the local radio. Other diversions included indulging in the “pleasure of skiing” and learning to drive a car (although Frisch was issued a driver’s license that did not have his name on it due to security measures).[12]

Otto Frisch at the Piano

Frisch’s response to the dropping of atomic bombs on Japan was ultimately ambivalent. “I still remember the feeling of unease, indeed nausea,” he remembered, “when I saw how many of my friends were rushing to the telephone to book tables at the La Fonda hotel in Santa Fe, in order to celebrate. Of course they were exalted by the success of their work, but it seemed rather ghoulish to celebrate the sudden death of a hundred thousand people, even if they were ‘enemies.’”[13] Los Alamos became a permanent scientific laboratory under the federal Atomic Energy Commission, but Frisch did not stay on, returning, like most of the British Mission delegation, to England. He led the physics division at the Atomic Energy Research Establishment at Harwell and taught at Cambridge University. Several of Frisch’s colleagues who had been instrumental in developing nuclear weapons technology, among them Szilárd, Weisskopf, and Albert Einstein, founded the Emergency Committee of Atomic Scientists, opposing the further use of nuclear weapons.[14]

Frisch and other Austro-Hungarian scientists’ contributions to the Manhattan Project are highlighted in the Los Alamos History Museum and Los Alamos National Laboratory’s Bradbury Museum.[15] The Manhattan Project National Historic Park, located in Los Alamos (with additional sites in Oak Ridge, TN and Hanford, WA), will take visitors to sites of significance to the Manhattan Project on laboratory property that are otherwise not accessible to the public.[16] The launch of these bus tours has delayed due to the ongoing pandemic. Visitors to Los Alamos can nevertheless visit many of their haunts downtown, including Fuller Lodge where Frisch played piano. 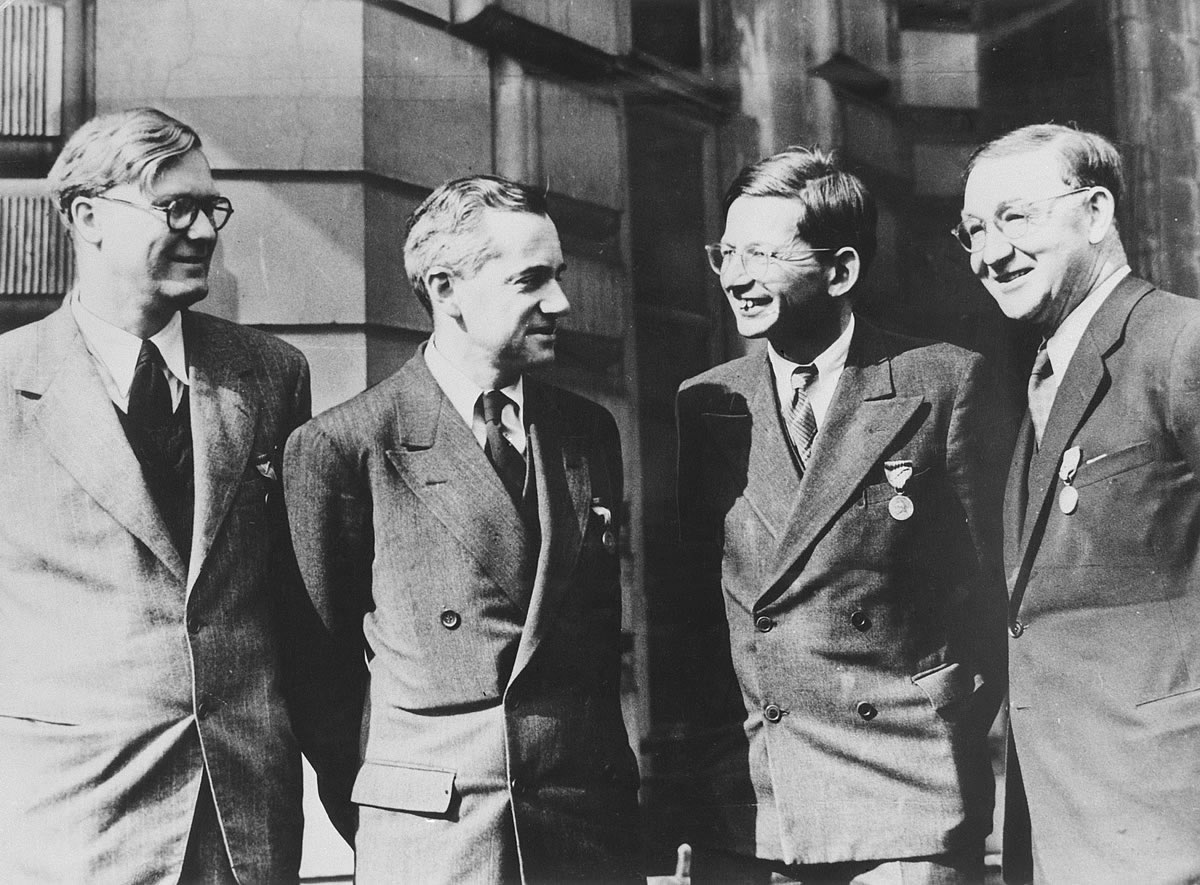 William Penney, Otto Frisch, Rudolf Peieris, and John Cockcroft in 1946, wearing American Medals of Freedom for their participation in the Manhattan Project.

Kristina E. Poznan, PhD, is a scholar of American immigration and foreign relations history. Her work examines the relationship between transatlantic migration, migrant identities, and separatist nationalism in the dissolution of the Austro-Hungarian Empire in the context of migration to the United States.  From 2017 to 2019 she was editor of Journal of Austrian-American History, sponsored by the Botstiber Institute for Austrian-American Studies and published by Penn State University Press. She currently lives in Los Alamos County, New Mexico and previously taught at New Mexico State University. She is the managing editor of the Journal of Slavery and Data Preservation and is at work on an administrative history of White Sands National Park in Alamogordo, NM, for the National Park Service, not far from the test site for the first nuclear bomb.

Kelly, Cynthia C., ed. The Manhattan Project: The Birth of the Atomic Bomb in the Words of its Creators, Eyewitnesses, and Historians. New York: Black Dog and Leventhal Publishers, 2009.

Images copyright of the Los Alamos National Laboratory, permitted use.

[1] von Neumann visited Los Alamos several times; Frisch claims they discussed early ideas for machine computing on their walks back to the Big House from the laboratory facilities (Frisch, What Little I Remember, 172-173).

[12] Frisch, What Little I Remember, 170, 158, 171. “He was a terrible driver”; Jay Wechsler’s Interview, Voices of the Manhattan Project, https://www.manhattanprojectvoices.org/oral-histories/jay-wechslers-interview.

[16] The National Park Service and the Department of Energy jointly operate the project; see https://www.nps.gov/mapr/index.htm and https://www.energy.gov/lm/doe-history/manhattan-project-national-historical-park.