Skip to content
No sleep till (Inns)Brooklyn: OSS operation Greenup and the Liberation of the Tyrol in May 1945 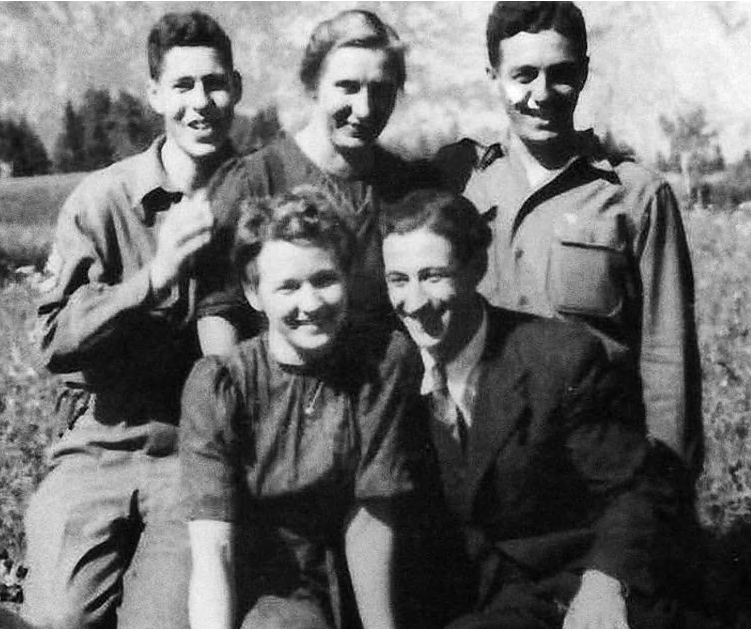 No sleep till (Inns)Brooklyn:  OSS operation Greenup and the Liberation of the Tyrol in May 1945

The New York Times’ headline “Torture Endured by Brooklynite Made Innsbruck Entry Bloodless” informed the public why US troops didn’t have to fight when on May 3, 1945, they took the Austrian city of Innsbruck, the largest city in the so-called Alpine redoubt of Nazi Germany. The article featured the now famous Operation Greenup and its chief operator Frederick “Fred” Mayer.

Operation Greenup was one of some thirty intelligence operations conducted by the Office of Strategic Services (OSS) division for Germany and Austria from Bari, Italy, with the target region of the southern parts of Germany, Slovakia, Hungary and Slovenia. The OSS launched a series of other operations into the German Reich from Switzerland, France, Scandinavia and the Netherlands, but none achieved the success of Operation Greenup. Altogether, the American and British forces carried out more than 21,000 airborne and parachute operations in Europe, nearly half of which supported the partisan movement in Yugoslavia. Refugees from across the entire Nazi dominion in Europe, antifascists in exile and local members of the resistance were involved in this collaboration to the extent it could be referred to as a transnational resistance against the Axis Powers.

The core Greenup team consisted of three agents in their early twenties who were parachuted into the Stubai Alps on February 26, 1945: Jewish refugees Fred Mayer from Freiburg im Breisgau and Hans Wijnberg from Overveen near Amsterdam, along with the Wehrmacht officer Franz Weber, a deserter and a devoted Catholic who had grown up in the village of Oberperfuss near Innsbruck.

In March 1938, Mayer and his entire family had fled Freiburg to Brooklyn, New York. The Mayer family was among the longest-established Jewish tradespeople in Freiburg and the founders of the local Jewish community. Fred’s father Heinrich had fought as an officer in the German Army in World War I. For ten years, he headed the Reichsbund Jüdischer Frontsoldaten in Freiburg, which aimed to emphasize the efforts of German Jews for their fatherland and to oppose anti-Semitic agitation.

Hans Wijnberg’s parents had owned a small factory for bicycle repair equipment in Amsterdam. His father Leonard was an activist with the liberal antifascist and anticommunist Eenheid door Democratie (Unity through Democracy) movement. In 1939, their parents also sent Hans and his twin brother Loek to Brooklyn. They had anticipated the German attack on the Netherlands. However, they were unable to save themselves and, together with their youngest son, all three were murdered in Auschwitz in 1943 and 1944.

At the time of Hans Wijnberg’s emigration to America, Franz Weber, a pupil of a Catholic grammar school and son of a rather poor farmer, enlisted in the Wehrmacht to become an officer. Although he came from a non-Nazi environment, he had welcomed the incorporation of Austria into Germany in March 1938. Above all, he considered the Anschluss and an army career to be opportunities for social advancement. However, by following this path, he took part in criminal Wehrmacht warfare in Poland, the Soviet Union, and Croatia. In May 1941, he started to entertain doubts about the Nazi system after visiting the Warsaw Ghetto, as did thousands of other Wehrmacht soldiers, and to anticipate the extent of Jewish persecution. Still, his desire to make something of himself and to become an officer was stronger.

Croatian partisans undermined Weber’s aspirations and self-perception in 1943-44. His regiment in the 187th Reserve Division was charged to secure the railroad lines against sabotage. Weber’s Division’s war journal delineates the massive involvement of its units in brutal counterinsurgency: burning down villages, shooting hostages, hanging civilians and destroying livelihoods. Weber was deeply struck by the partisans’ courage and unwavering commitment as they continued attacks on the railroad network which the Wehrmacht used to transport troops between the Soviet Union, the Balkans, and Italy. During his eighteen-month stay in Croatia, it became clear to Weber that German tyranny was unsustainable, that it would lead to a “concentration camp Europe,” as he later stated. Transferred to the Italian front in the summer of 1944, he defected during an attack by the US troops near Viareggio.

In interrogations by Allied officers, Weber declared himself ready to oppose the Wehrmacht. Weber literally switched sides to participate in sabotage. Early in January 1945, in a discussion with OSS officer Dyno Loewenstein, son of the prominent German socialist and pedagogue Kurt Löwenstein, he accepted the responsibility to smuggle the highly trained OSS agents Mayer and Wijnberg into his home village of Oberperfuss, to put them up at his family’s and friends’ homes, and to establish contact with Innsbruck to make it possible to spy out the railroad traffic over the Brenner Pass. The backbone of the local setup were women: Weber’s sisters Eva, Luise and Margarete, his neighbor Maria Hörtnagl, his fiancé Anni Niederkircher and her mother Anna Niederkircher, the charismatic and respected owner of the village’s Hotel Zur Krone.

With their help and under Mayer’s leadership, OSS agents were able to collect valuable military and political intelligence that Wijnberg transmitted to Bari in forty-six messages. In addition, they set up a network of local regime opponents in Innsbruck, some of whom were Wehrmacht officers, police detectives and even members of the Gestapo, to assist the US forces in liberating the region. Some of Mayer’s most significant helpers in Innsbruck were of Jewish origin or involved in saving Jews from Nazi persecution, particularly the family of Robert Moser, an Innsbruck radio dealer who agreed to employ Mayer as a French worker in his business, thus making Mayer’s presence in Innsbruck “legal.”

However, the Gestapo was able to plant an informer inside Mayer’s network, resulting in a raid on the regime opponents and in Mayer being arrested on 20 April. Mayer and a group of his local allies were tortured to find out Wijnberg’s and Weber’s hideout. Mayer withstood the agony, which explains his later fame within the OSS, while Robert Moser was tortured to death. Mayer survived because he, as an American officer, was particularly valuable to Franz Hofer, the Gauleiter of Tyrol-Vorarlberg. By the end of April, Hofer was one of the “losers” of the famous Operation Sunrise, the capitulation negotiations between Allen Dulles, the head of the OSS in Switzerland, and SS-Obergruppenführer Karl Wolff in Northern Italy. The agreement Dulles and Wolff reached on an early capitulation of all German troops in Northern Italy on May 2 thwarted Hofer’s scheme to hold on to power in Tyrol.

As the Gestapo and the Sicherheitsdienst (SD) in Innsbruck were subordinate to the commander of the Sicherheitspolizei and the SD (BdS) for Italy, they dissolved their organization on May 1. The following day, Hofer and his personnel – accompanied by Mayer and Wijnberg who had come out of hiding – withdrew from Innsbruck to his residence, the Lachhof. The original plan of the Nazi leaders to execute the opponents of the regime never materialized. Their physical integrity, especially that of Fred Mayer, offered Hofer a last chance to engage in negotiations with the Americans regarding his personal future. In discussions with Mayer on May 2 and 3 at his home at the Lachhof outside Innsbruck, Hofer consented to give up all forms of defense and to declare Innsbruck an open city. In addition, the Greenup agents were able to establish contact with the approaching 103rd Infantry Division early enough to inform them of Hofer’s willingness to capitulate. An assault on Innsbruck was thus avoided, and after three days of fighting since entering Austria on May 1, tanks of the 103d Infantry Division drove into the city in the evening of May 3 without a shot.

Mayer’s and Wijnberg’s  intervention with Hoferhad created the power vacuum that facilitated regime opponents under the leadership of Karl Gruber – very soon to become the first foreign secretary of the Second Republic – to occupy important buildings in Innsbruck, to flag the city in red, white and red, and to announce the transition of power. Forced laborers, prisoners of war, as well as people from Innsbruck cheered the American soldiers. Signal Corps photographer Irving Leibowitz captured the scenes and the pictures seen as evidence “that the population was glad to get rid of the Germans,” and that Austria had thus risen from the dead.

No wonder that in the Anglo-American world, Operation Greenup attracted attention from historians and journalists as soon as the OSS files had been declassified. Since the opening of the OSS archives in the late 1970s, the Greenup story has been recounted in several monographs and books. Most prominently, Joseph E. Persico featured the Greenup story in his bestselling intelligence drama Piercing the Reich. Thirty years later, American director Quentin Tarantino used historical OSS missions such as Greenup as inspiration for his blockbuster movie Inglourious Basterds. Following this, Canadian director Min Sook Lee featured the protagonists of Operation Greenup in her award-winning documentary The Real Inglorious Bastards which was broadcasted by several TV stations in Europe as well.

In Austria, however, the merits of the agents of Operation Greenup were simply ignored. As seen in highly successful TV documentary series, Österreich II, in 1982 Hugo Portisch presented the liberation of Innsbruck as the brilliant feat of Austrian patriots without mentioning the merits of the Greenup agents and their – mostly female – helpers. Although Persico’s book was already available in English and German, Portisch relied completely on the Austrian version of liberation told by Gruber, probably in an attempt to provide the Austrians with their own positive history and to affirm national pride. He had learned the art of positive spin at the daily newspaper Kurier, controlled by the US occupation forces, and in 1950 as a fellowship recipient in the United States.

Operation Greenup only became more widely acknowledged in its original locales in 2015 when the Local Museum Absam organized public screenings and discussions of The Real Inglorious Bastards in Oberperfuss and Innsbruck, thus triggering new local interest. Among the results of this delayed local involvement are the first books published in German, including my work Codename Brooklyn.

In Codename Brooklyn, I consider the separate narratives and the common ties between American and local viewpoints on Operation Greenup. Likewise, I highlight certain aspects that had remained disregarded both in the US and in Austria. One of these unappreciated elements is the Jewish context into which the Operation was weaved in Innsbruck. Here, too, Tarantino’s plot could have given a clue (since, in his film, it was the Jewish Frenchwoman Shoshan who was decisively involved in retaliation). The importance of the Jewish framework to Operation Greenup is only now being recognized because of the long privileging of national memories in the American as well as the Austrian contexts. This also applies to the non-realized prosecution of Gauleiter Franz Hofer and Gestapo officers of Innsbruck who were responsible for the torture of Mayer and his supporters, the killing of Robert Moser, and the persecution of Jews in Innsbruck and elsewhere.

Tarantino’s fiction inspired people to question established memories and to subvert authoritative narratives. Pop culture has the quality to evoke unexpected transcultural and transgenerational connections. The positive associations the title Codename Brooklyn elicited among younger people in Innsbruck are an example. Borrowing from the Hip Hop band Beastie Boys and their song No Sleep till Brooklyn (1987), youth culture dubbed their hometown Innsbrooklyn, a nickname that has been maintained and is now positively linked to the history of Operation Greenup in online media postings. Fred Mayer and Hans Wijnberg were the ones to have originally projected Brooklyn onto Innsbruck in 1945 when they selected the code name “Brooklyn” for their target Innsbruck while awaiting their mission at the OSS base in Bari. As Brooklyn had given them, as young refugees, a new lease on life, for Innsbruck, they wished the same opportunity.

Tiroler Landesarchiv, Innsbruck, Austria: Landesgericht Innsbruck (among many others). 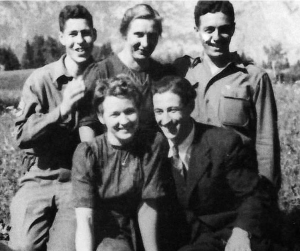 “Plan for the Greenup Party” 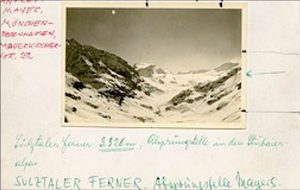