My dissertation project is a transnational history of the American migration experiences of Jews from the Habsburg province of Galicia between the 1890s and 1930s. Specifically, I will examine the transformation of Galicia from a real, geographic space in which the Jewish immigrants once resided, to an imaginary homeland in the mindset of this diaspora. This meaning of Galicia as a specific “Jewish homeland” is rooted in concrete historical experiences of Galician Jews in the age of migration and the aftermath of the First World War. Within the space of urban immigrant neighborhoods, Galician Jews encountered Jewish immigrants from various eastern European regions. At the same time, maintaining connections with the people and places they left enabled a cultural exchange of ideas and tourism to interwar Europe. These encounters forced Galician Jews to rethink their self-understanding in dialogue with their social and spatial environment. As a result, these Jewish immigrants developed a new identity as Galitsyaner. This case study of the Jewish immigrant community in New York will illuminate both the transnational nature and local production of Galician Jewish identity and imagination. By looking at newspapers, personal writings, cultural works, travelogues, and communal institutions my dissertation will show how Jews from Galicia came to narrate their own past and use it to understand their roles in the diaspora. Ultimately, it will shed light on the historical understanding of notions of Jewishness, belonging and place in modern Jewish culture.

My journey into Galicia started with a summer internship at the Galicia Jewish Museum in Kraków, Poland, in 2014. There I realized how an Austrian region–that I had considered mostly as a poor backwater of the Habsburg monarchy–influences architecture, culture, cuisine, and even politics of south-western Poland today, and how proudly Poles embrace and showcase this heritage. In addition, I have met many American Jewish tourists in the museum who proudly announced that they are “Galitzianers” – often without having any idea about the history or culture of this region. It seems there is a strange but strong desire to be associated with this Habsburg province on both sides of the ocean. This inspired me to pursue studies in issues of memory, migration, and homeland. Why does this region still loom so largely in the minds of the American Jews and Poles that I have met in Kraków?

The migration experience from Habsburg Galicia to the United States from the 1890s to the 1920s is key to understanding the forms of memory that shape American Jewish life and culture today. The destructions of the First World War on the eastern front in Galicia as well as the pogroms of 1918-19 inspired Jewish immigrants in New York’s Lower East Side to produce the first memorial books (yizkher bikher) – a medium of coping with trauma that became influential after the Holocaust. In addition, the same Jewish immigrants started to write memoirs fueling an image of nostalgia about the lost homeland of Galicia. This physical–but more importantly–mental gap between the Habsburg lands and the United States, created not only foundational forms of Jewish memory, but also a complex legacy of self-understanding. In New York’s immigrant neighborhood Jews from different parts of central and eastern Europe lived in a very dense area. This caused them to hold stronger to, and often create and imagine the culture of the places they left–the origin of the label “Galitzianer.”

How is the Covid-19 pandemic affecting your work?

It is no surprise that research is difficult for me at the moment: Archival trips and fellowships have been canceled or deferred due to the pandemic. I have been making some progress on reading online newspapers and journals published by Jewish immigrants in New York’s Lower East Side from 1900 to 1920s. In addition, I took the opportunity to clean up my literature and sources databases. However, I am looking forward to starting my archival research in Vienna, Kraków, and L’viv with the support of BIAAS this summer.

I would love to talk with Joseph Roth about belonging, his sense of losing and imagining home, and his relationship to Jewish culture and tradition.

I’m currently reading Douglas Adam’s “The Hitchhiker’s Guide to the Galaxy” – a classic that I’ve never read but had been imposed on me, and gladly so–it is such a fun read. 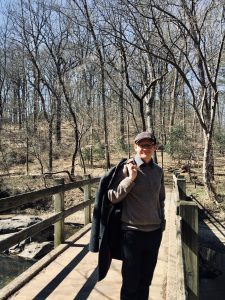 Oskar Czendze received a $3,500 BIAAS grant for his project, “From Loss to Invention: Galician Jews Between New York and East Central Europe, 1890-1938.” His project investigates the daily life experiences of Jewish immigrants from Austrian Galicia in New York’s Lower East Side. With the help of the Botstiber Research Grant, Czendze will collect autobiographical,…