My project is a documentary that tells the story of Karol Rathaus, a prominent composer of concert and film music, who was forced into exile from Nazi Germany and fought for his creative survival in the atmosphere of cultural and political hostility. Rathaus’ life from his birth in Ternopol (Austria-Hungary at the time of his birth, part of Western Ukraine now) through his education in Vienna and Berlin, escape to Paris and London and his ultimate arrival to New York City provides the story’s spine and presents the character arc. The film observes Rathaus’ transformation from a talented, but alienated student in Vienna, shunned by local society because of his Galician origin to his position as a leading composer in the Weimar Republic, with performances at Berlin’s opera and by the Berlin Philharmonic. He would be the first serious music composer to be commissioned to compose a film score. With Hitler’s arrival, we follow his fate as a refugee moving from Paris to London before taking the only lifeline on offer, a modest position as music professor at a small, recently founded college in New York City. From this safe haven, he suppresses his past and focuses his energies on teaching.

This story is told through the eyes of a young musician, Sergei, a graduate of the music school that Rathaus helped to found. Sergei is also a Jewish immigrant, arriving in New York half a century later. Rathaus attracts Sergei’s attention not only because he was a brilliant composer whose music has been forgotten, but because of his extraordinary character: a man who accepted his new life while hiding his despair from everyone except his closest family and friends.  Sergei senses that if Rathaus’ music has been forgotten in Europe, it was barely even known in his new American homeland. It’s his intention to explore the unique story of the composer, and recover the music that at one point, impressed Europe’s most critical audiences. Sergei retraces Rathaus’ steps through Europe and meets with people who knew Rathaus personally, his remaining family members, students, musicians, musicologists and historians.  Sergei also explores how America’s response to the European refugee crisis during the Nazi years affected Rathaus’ choices. He explores the parallels with present-day refugee and immigration politics and the rhetoric we hear today. He looks for explanations for Rathaus’ life choices from his students, family and experts studying refugee psychology. The film shows the life of Karol Rathaus as a series of immigrations – from Ternopol to Vienna and Berlin, from Berlin to Paris and London, and finally to New York. Each of these dramatic events leaves a mark on the composer’s soul contributing to his ultimate fate. We see through Sergei’s eyes how Rathaus struggles with existential questions posed to him by the events in Europe:  How one can remain a German or Austrian composer after Germany and Austria succumbed to Nazism? What kind of composer should he become in his new homeland? Who are his people? Jews, Austrians, Poles, Americans?

As a recording producer for Decca Records, I curated and produced recordings of composers lost during the Nazi years and not revived afterwards. One of these composers was Karol Rathaus. His music was so individual and unlike anything else from the period or the place that I was astonished to learn of its success and popularity in the 1920s and early 1930s.

The exodus of Jewish musicians from Austria and Germany during Nazi reign resulted in transplantation of Austrian-German musical traditions throughout the world, and especially in the USA. Many composers, carriers of Austrian musical heritage became teachers and contributed to the formation of American musical traditions. At the same time, their own music became influenced by the idioms of American music. With the arrival of the cold war and McCarthyism, fear of deportation kept Rathaus and others from attempting to revive their profile from the years before Hitler. For Rathaus, this was a particularly acute fear as unlike his friends Hanns Eisler and Bertolt Brecht, he was officially no longer Austrian, despite having been a patriotic Austrian until his loss of citizenship in 1938 when he managed to procure a Polish passport. His original home of Ternopol was now part of the Soviet Union. As a result, he felt he had no “home” to return to.

The pandemic brought the work to hiatus as world travel became restricted. Among our plans were to shoot parts of the film in Vienna, but these plans had to be postponed till the situation with the pandemic improves.

What books are a must-read for your topic?

Michael Haas, Forbidden Music: Jewish Composers Banned by the Nazis; Henry Feingold, Politics of Rescue; Dorothy Crawford, Windfall of Musicians, Hitler’s Émigrés and Exiles in Southern California; Joseph Roth, The Radetzky March, What I Saw: Reports from Berlin 1920-1933, Report from a Parisian Paradise; Alex Ross, The Rest is Noise: Listening to the 20th Century, and; Frances Saunders, The Cultural Cold War: the IA and the World of Arts and Letters.

What was a high point of your research experience with this project?

The high point was the organization of and participation in a Karol Rathaus music festival, when his music was heard for the first time in many years performed by younger generation of musicians, along with the American premiere of his Second Symphony.

We would love to explore Galicia and the Bukowina, the homes of Karol Rathaus and his closest friends and associates.

Franz Schreker, Rathaus’s composition teacher. We would love to ask him about Rathaus and his vision for Rathaus’s future 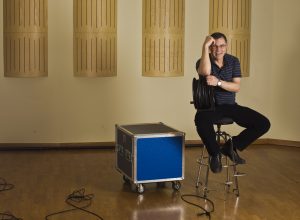 Dr. Michael Hass received a $15,000 BIAAS grant for “Discovering Karol Rathaus,” a film about a Jewish composer of classical music posed to become one of the most influential composers of his generation. With the rise of the Nazis he escaped Germany but failed to reestablish himself in the hostile cultural and political atmosphere of…