I became interested in my BIAAS related topic when undertaking the research for The Female Secession. I discovered the impact of Austrian-American emigres in spreading the Secessionist cult of child creativity to the postwar United States. The more I researched, the more I discovered how deep and profound such transatlantic cross-currents were, through émigré figures like Emmy Zweybrück, Viktor Löwenfeld, as well as the American followers of Franz Cizek.

One of the main ways I discovered the project was through my research on Emmy Zweybrück, who was a seminal figure in interwar Vienna’s feminist art movement. But she was equally renowned as a pedagogue and art teacher and increasingly taught teacher training seminars in the USA in the 1930s, where she emigrated after the Anschluss.

The cult of child creativity taking root in postwar America—or notions that all children are inherently creative with unique access to imaginative and expressive powers—remains ubiquitous in contemporary American society, as manifested in elementary and preschool curricula, a pervasive “do-it-yourself” culture for artistic practice in the home, and a multi-billion dollar art supply industry. But despite their importance to the postwar American political consciousness, rarely are such discourses on child creativity connected to their intellectual roots in Secessionist Vienna. Indeed, such discourses were the DIRECT outgrowth of émigré figures like Emmy Zweybrück, Viktor Löwenfeld, and others (especially followers of Franz Cizek) even though they became engrained in the postwar American political consciousness and popular culture.

There are so many! I am always on JSTOR, Project Museum and use the CUNY/KBCC interlibrary loan frequently. On the web, the Heidelberg University digital library project is very useful. And increasingly most museums and cultural institutions maintain Instagram accounts and post CFPs and other research opportunities there too—so I am always there as well.

Which scholar (s) do you admire the most? Why?

I admire so many scholars, far too numerous to list here! One scholar whom I have long admired since my grad school days is Michael Yonan, whose scholarship is a model of tour-de-force interdisciplinarity and whose research interests (in gender, art design and cultural history) intersect with mine. His monograph on Maria Theresia with PSU Press opened doors for many young scholars in the way he attributed complex layers of meaning to material objects.

I am not so sure it is off the beaten path but I love visiting the Salzkammergut and especially Hallstatt. My husband and I visited Hallstatt as undergrads and took in all of the usual sights: the salt mines, the cemetery and famed “Beinhaus.” During my time living in Budapest, I enjoyed excursions to Szentendre and visiting the Ady Endre museum there, in addition to the marzipan museum.

I would love to meet Fanny Harlfinger-Zakucka, co-founder of the radical feminist league (1926), the Wiener Frauenkunst which I examined in my recent book The Female Secession. I would love to ask her how she interpreted her curatorial work and her own artistic practice and ask her whether she realized she would be such a pioneering feminist art historical ‘foremother.’ I would love to ask her whether she thought the Wiener Frauenkunst’s feminist goals were actually achieved, as well as what she thought of more recent developments in feminist art and craft. I believe she would find much in common with adherents of feminist handcraft today (like the StitchNBitch movement) or even DIY amateur circles.

I am currently watching The Chair on Netflix. Brilliant and hilarious! I’m also relating to Working Moms. I am reading Glenn Adamson’s Craft: An American History, among other things. 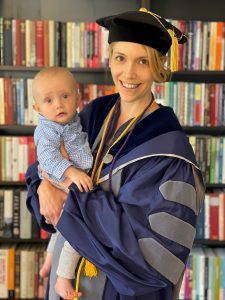 The cult of child creativity taking root in postwar America—or notions that all children are inherently creative with unique access to expressive powers—remains ubiquitous in contemporary American society. But rarely are such discourses connected to their intellectual roots in Secessionist Vienna. My project spotlights the critical role of pedagogue, craftswoman and designer Emmy Zweybrück-Prochaska (1890-1956),...