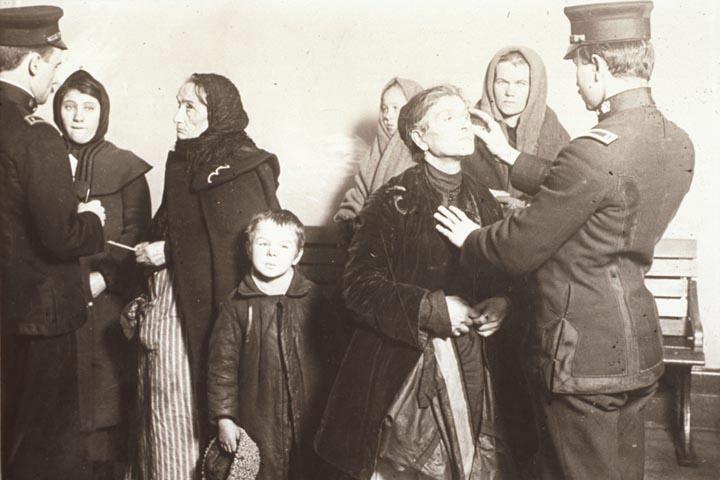 The Leipzig registration station, opened in 1904, was part of a network of inspections stations that screened overseas-bound emigrants as they crossed Germany en route to port cities. Control stations (Kontrollstationen), which, unlike registration stations, required bathing and disinfection, arose first along the Prussian-Russian border in 1894. It helps to think of them as smaller Ellis Islands. These inspection stations served partly as a form of US “remote control”[i] on the European continent. Though run by steamship agents and local officials, these checkpoints along the “transit corridor” screened migrants based on US entrance regulations because that was the main receiving land. Presumably, migrants who were ill or impecunious would then be prevented from going all the way across the Atlantic, just to be sent back. The German state had an interest in the control system as well. Like the United States, it invoked the fear of waylaid migrants becoming a public charge and of the introduction of disease into local populations (even though disease control depended mostly on local sanitation). German steamship companies benefited from a form of protectionism because only migrants with tickets from the German steamship cartel could pass, thus creating a near monopoly on traffic. Lastly, as mentioned in Part I, German state-owned railways prospered from the traveling masses.

Transmigrant controls in Saxony were in general more relaxed than those in Prussia because of the belief that emigrants from Austria-Hungary were more hygienic than those from the Russian Empire. Authorities in Leipzig were required to send any Russian civilians to a control station in Berlin for bathing and disinfection. Though Saxon authorities categorized migrants primarily by their provincial origins (e.g., “Galicians” instead of “Poles”) instead of ethnicities, anti-Semitism arguably played a role with the stricter screening of Russians versus Austro-Hungarians. About 9% of the emigrants from Austria-Hungary were Jewish,[ii] versus 50% of emigrants from the Russian Empire.[iii] The Habsburg Empire did at that time have fewer outbreaks of cholera than its neighbor, but environmental and sanitary circumstances could also become a self-fulfilling prophecy. Jews segregated to the Russian Pale of Settlement lived in notoriously impoverished, neglected conditions, with restricted work opportunities to better their situations; people from regions prone to outbreaks would thus seek to emigrate.

Eventually the emigrant trains arrived at the departure port cities. In Germany, these were Hamburg and Bremen (ships left from Bremerhaven, just outside the city). Though authorities enforced the “transit corridor” to separate transmigrants from the local population, in reality, thousands of transmigrants entered German territory “unsupervised” every year by walking across the border or hiding among seasonal laborers.[iv] However, steamship companies would certainly not turn healthy, paying customers away, with or without a certificate from a registration or control station. After their arrival, migrants were guided from the train station to “emigrant halls” or hostels where they ate, slept, prayed (there were church buildings, a mosque, and a synagogue in the Hamburg location), and prepared for an overseas departure. Today the BallinStadt Emigration Museum in Hamburg and the Emigration Center in Bremerhaven, part of a growing trend of European museums that explore migration heritage, help visualize the historical transit process.[v]

Shortly before departure, emigrants underwent another medical inspection and, as required by US law, received an inoculation against smallpox. Doctors based this last necessity on whether the migrants already had a vaccination scar. If there was none, regardless if the migrant already had a prior vaccination, the doctors scraped a scalpel with cowpox variola on the befuddled recipient’s arm. The migrants then bordered the steamship and, as they departed, waved from the decks to family, friends, and strangers on the harbor platforms.

Depending on the departure and arrival ports, the transatlantic voyage from continental Europe to the United States lasted anywhere from ten to fifteen days. Working-class emigrants usually traveled in steerage, the lower decks, with cramped sleeping quarters and unappetizing food. Travel options for the lower classes improved in the early part of the 20thcentury with the introduction of “third class” travel, not as posh as second or first class, but roomier than steerage. Many passengers had some form of seasickness at first and headed to the decks for fresh air. Others had more memorable experiences. One story, told second-hand to me by a woman in Kansas City, Missouri, involved the woman’s mother and aunt as small children who traveled with their mother from eastern Europe. The mother had brought along some alcohol from their homeland for a relative already in the States. The young girl, unaware of what the bottle contained, imbibed the drink and became so sick that the family was waylaid in England for a time until she recovered.

Once the steamships reached the harbors, they docked and let the first- and second-class passengers leave for customs after a quick inspection on the boat. In New York City harbors, the steerage passengers and third-class passengers were then placed on ferries to Ellis Island because the water around the island was too shallow for large ships. The stop at the infamous inspection station took about two to five hours if the migrants passed muster. Inspectors and doctors observed the arrivals as they filed past, looking for anyone who displayed outward signs of illness. About halfway through the line, an “eyeman” used a buttonhook (reports vary whether the instrument was sanitized between each use) to flip the eyelid to check for trachoma. In the registry room, migrants answered 29 questions about their background and intentions. Such questions included asking whether the person was an anarchist or polygamist. Unlike today’s employer-sponsored immigration, laborer immigrants at this time technically could not have a job already arranged. This law was intended to deter immigration. However, if immigrants did have work procured, travel agents in their homelands “coached” them to lie, or the migrants would not gain entry.[vi]

After the inspection at Ellis Island, immigrants either went into New York City or took a train directly from the Central Railroad Terminal of New Jersey to farther US destinations such as Philadelphia or Chicago. This transnational migration inspection system functioned until World War I with the blockade of German harbors. After the war, the universal requirements of passports and visas, the US Immigration Quotas of 1921 and 1924, and the Great Depression altered the landscape of emigration from Europe. The growing research on transmigration plays with the notion of a golden age of immigration to the United States before World War I. While, in many ways, movement was freer (if the person had some capital), there were still inspections, regulations, and required documents. Additionally, this research pushes against the notion that prior waves of immigrants came to the United States the “right way,” as opposed to more recent waves of migrants across the US-Mexican border. As shown, a number of migrants from Austria-Hungary avoided conscription, circumnavigated control points in Europe, lied to inspectors at Ellis Island about their employment status, or smuggled themselves across the Mexican or Canadian borders in order to gain entry. It just goes to show that the process of people in transit, today and historically, has been oftentimes complicated and contradictory.

Allison Schmidt is a historian of Central Europe and its global connections who is currently turning her dissertation, “Crossing Germany: Eastern European Transmigrants and Saxon State Surveillance, 1900–1924” (University of Kansas, 2016), into a book.

Cities and Overseas Migration in the Long Nineteenth Century, special issue of the Journal of Migration History, vol. 2, no. 2, pp. 209-376.

Annemarie Steidl, Wladimir Fischer-Nebmaier, James W. Oberly. From a Multiethnic Empire to a Nation of Nations: Austro-Hungarian Migrants in the US, 1870-1940 (StudienVerlag, 2017).

[i] Aristide Zolberg, A Nation by Design: Immigration Policy in the Fashioning of America (Cambridge, Mass.: Harvard University Press, 2006), 9.

[ii] This estimation is based on 1910 US census data that stated 9% of the immigrants from Austria-Hungary spoke “Yiddish.” See Annemarie Steidl, Wladimir Fischer-Nebmaier, James W. Oberly. See From a Multiethnic Empire to a Nation of Nations: Austro-Hungarian Migrants in the US, 1870-1940 (StudienVerlag, 2017).