Skip to content
Freud and Tiffany, New York and Vienna 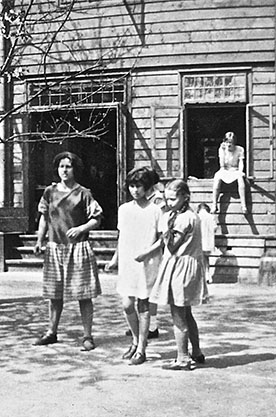 At a time when Vienna was to the Western world what New York is today, Louise Tiffany was reading Freud’s newly-published Interpretation of Dreams in German. Twenty years later, Dorothy, the daughter of Louise and Louis Comfort Tiffany, would take her own four children from New York to Vienna for safety and psychoanalysis and for respite from her complicated marriage to Robert Burlingham at its end. They arrived in 1925. Dorothy tested out psychoanalysis first in a few sessions with Theodore Reik and soon her unhappy eldest son Bob started his “lessons” with Anna Freud at Berggasse 19.  By 1927, the Burlingham family had moved into a 4th floor apartment in the same building. Then, since Dorothy disliked the conventional education available to her children, as Anna Freud explained, “her obvious remedy was to found a modern school of her own.”[1] With their début-de-siècle emphasis on modernism and reform, they created a school based on an unprecedented mix of Austrian and American innovations in education: the new field of psychoanalytic pedagogy just emerging in Anna Freud’s circle, Tiffany’s own art school at Laurelton Hall, John Dewey’s “Project Method” and the progressive education movement, and the advent of education for social democracy in interwar Vienna.

Hietzing (die Hietzinger Schule), the school that took its name from Vienna’s leafy 13th district, was endearingly nicknamed The Matchbox for its small size or sometimes called the Burlingham-Rosenfeld School after its founders or even just the Burlingham School. But ever since it closed in 1932, Hietzing has been known mostly as Anna Freud’s School “organized according to psychoanalytic principles”[2] in both its goals and reputation, with some unexpectedly radical teaching ideas added to classical theory. In contrast to the conventional narrative of psychoanalysis’ exclusive focus on individualism, both Anna Freud and her father respected the interdependent nature of our inner and outer worlds. “Whoever wishes to discover the connection between unemployment, the housing shortage, and neglected children must try sociology,” she said. “But the teacher who desires more of the mental background… of the individual may obtain [it] in psychoanalysis.”[3] Beyond this, “children not only need to be taught, but need a chance to teach themselves.”  As a teacher and then a clinician, Anna Freud had observed how “educators want to make the child that suits them, which differs according to the century, position, and rank of the adults.” The more education demands conformity to an adult world, the greater the detriment to the developing child. The result of these observations was a school where the child could develop as a “free and self-reliant human being.”[4]

Hietzing oﬀered Anna Freud a place to put into practice what she had been observing, conceptualizing and writing about children for almost a decade. Dorothy Burlingham built the school, supported the teachers, taught English, and steadied the careful balance of pedagogy and psychoanalysis. Between 20 and 35 children attended at any one time; they were separated into a “younger group” and an “older group” which ended at the equivalent of sixth grade. Today it would be called a micro-school. As the director, Peter Blos adopted John Dewey’s Project Method so that the curriculum was structured but without grades, experimental and progressive yet thoroughly academic. Students worked in groups on collective projects, regardless of their age and gender, within an empathic, non-threatening environment. The projects combined art, math, science and languages, and were designed to cultivate forms of critical thinking and cultural awareness. “They were then amazingly capable of drawing all the facets of learning the mandatory “three Rs” into the focus of a given project and of mastering otherwise dreary-to-learn skills,” observed Erik Erikson[5]. To what extent was the school psychoanalytically-informed? Katrina Burlingham remembered: “There was a connection between analysis and the school’s educational ideas but personal analysis and analysis in general was not brought into the classroom.”[6] Regardless, most pupils were in analysis, usually in the afternoon, and all the teachers were analysts themselves.

With its place at the intersecting histories of psychoanalysis and education, of Americans looking to Vienna for psychoanalytic training in the 1920s, and of the remarkably broad impact of its teachers from the 1930s onward, Hietzing plays an unsung role in the history of Austrian-American studies. Today, the Hietzing staff roster reads like the register of the 20th century’s major theorists in psychoanalysis, and psychoanalytic writers of note, like Florian Houssier[7] in France, regard Hietzing as the birthplace of a uniﬁed psychoanalytic theory of adolescence. Anna Freud’s own role marks a pivotal point in this history. She brought to Hietzing the empowering reforms in early childhood education crafted by her colleagues August Aichhorn and Siegfried Bernfeld, while supporting the next generation of theorists, most prominently the Hietzing teachers Peter Blos and Erik Erikson. Her articulation of children’s rights in both “Beyond…”[8] and, with Dorothy, “Before”[9] the best interests of the child, originated in the emancipatory ethos of post-World War I Vienna. Even today, in family and child welfare law from the United Nations to local court houses, Anna Freud’s deeply child-focused principles help ensure the psychological well-being of young people.

“Back in Vienna then, we were all so excited – full of energy,” Anna Freud told Robert Coles in the 1980s. “It was as if a whole new continent was being explored. We were the explorers, and we now had the chance to change things.”[10] Where the postwar Social Democrats had developed a vast array of progressive, or so-called “Red,” reforms from large-scale housing and public health services to children’s clinics and community concerts, by the early 1930s the encroaching “Black” Austrofascist militancy began dismantling each innovation piece by piece. The Hietzing teachers mostly left, by choice or exile, after the school closed in 1932. Their exemplary advances in theory and practice, however, live on in the United States and Europe. Anna Freud and Dorothy Tiffany Burlingham launched the Jackson Nursery, the Hampstead War Nurseries, and the Hampstead Child Therapy Course and Clinic in London. Their method of direct observation yielded critical research findings on early childhood development while safeguarding children from war-torn London and Vienna. Marie Briehl and Esther Menaker expanded the field of child analysis in America. August Aichhorn’s protégé Fritz Redl founded the landmark Pioneer House program in Detroit. Peter Blos standardized psychoanalytic theory of adolescent development. Today the Alliance for Psychoanalytic Schools ranges from Cleveland’s Hanna Perkins School to the Studio School in New York. For Erik H. Erikson, the Pulitzer Prize winner who infused modern culture with the central concept of the social environment’s inﬂuence on human development, the Hietzing school experience fueled “that rare joy which is evoked where a setting permits us to respond to the growth potentials of young people as they reveal and develop our own potentials.”[11]

In the field of psychoanalytic pedagogy of the late 1920s, Anna Freud and Dorothy Tiffany Burlingham were the pacesetters. They founded what Erik Erikson called “the best possible school” and brought to their project all the modernist creativity of interwar Vienna. Arguably more valuable, however, are the many theories that emerged from the school: child analysis, self-regulation, adolescent psychology, self and identity. From education at the short-lived Hietzing School to the depth of Anna Freud’s ideas, today we are still working with a remarkable institutional and conceptual legacy.

Elizabeth Ann Danto is emeritus professor at Hunter College – City University of New York, and an international lecturer on the history of psychoanalysis as a system of thought and a marker of urban culture. She is the author of Historical Research (Oxford University Press, 2008) and her book Freud’s Free Clinics – Psychoanalysis and Social Justice, 1918–1938 (Columbia University Press, 2005) received the Gradiva Book Award and the Goethe Prize. With Alexandra Steiner-Strauss, Dr. Danto recently co-edited the book Freud/Tiffany: Anna Freud, Dorothy Tiffany Burlingham and the ‘Best Possible School’ (Routledge, 2018). Dr. Danto received a BIAAS grant in 2011 for her research on the Viennese psychoanalyst and pediatrician, Josef Friedjung. Furthermore, as the overall director of the Freud/Tiffany Project, sheorganized and convened the accompanying Symposium which BIAAS supported at the Freud Museum London in 2016.

Freud, A. ([1930] 1974) Four lectures on psychoanalysis for teachers and parents. In The writings of Anna Freud, vol. 1. New York: International Universities Press.

Film: Anna Freud and ‘The Conscience of Society’ – a 15 minute digital exhibit by Elizabeth Ann Danto (curator) and Alexandra Steiner-Strauss (co-curator) on the fascinating intersection of psychoanalysis and education. Out of the cultural and political ferment of inter-war Vienna emerged the Hietzing School, founded in the 1920s by Anna Freud and Dorothy Tiffany Burlingham.