Skip to content
The Fiume Crisis: Made (But Not Primarily) in the USA 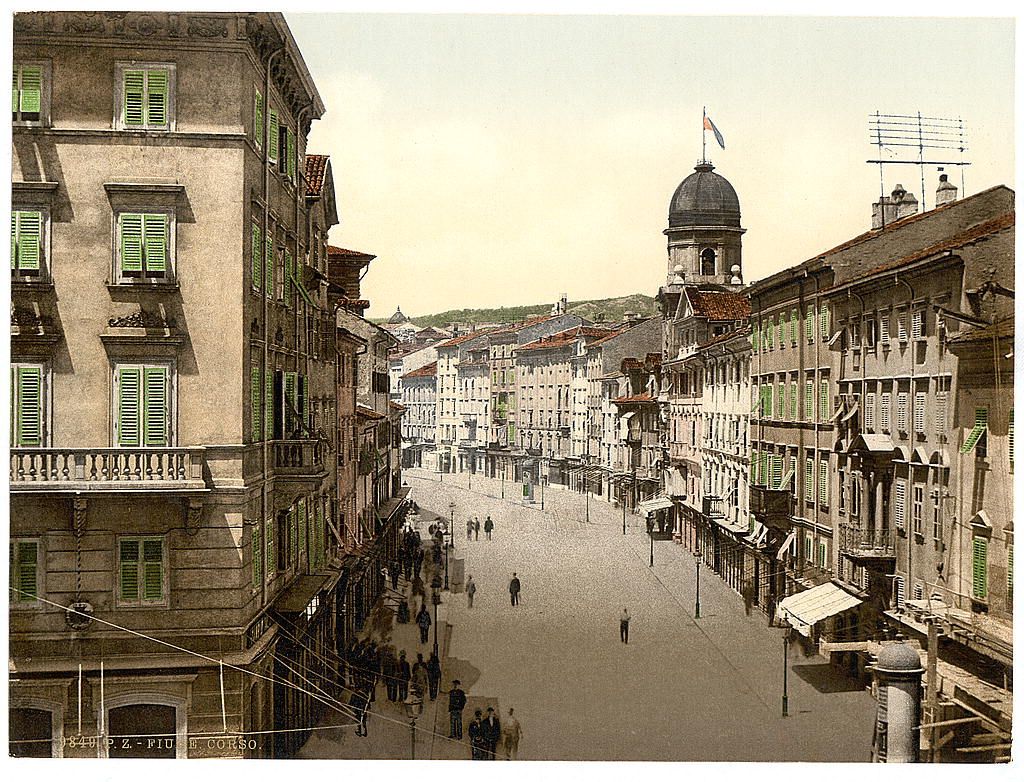 The Fiume Crisis: Made (But Not Primarily) in the USA

What would have happened if Woodrow Wilson and his corps of American experts had focused less of their post-WWI energy on the northeastern Adriatic port town of Fiume? Perhaps the Paris Peace Conference would not have collapsed in diplomatic deadlock, leading to the only Great Power walk-out of the entire proceedings. Perhaps Japan would have been denied the mandate over mainland China. Perhaps two successive Italian governments would not have fallen apart. A charismatic dictator-poet might not have founded a rogue republic in the city. Italian pirates might have idled on the Adriatic, instead of attacking ships and scoring booty to fund the poet’s Fiume regime. Peace might have reigned then, in Fiume, over the 1920 Christmas holiday with no need to chase out said poet and his followers. Perhaps Fiume would not have become the smallest successor state of post-WWI Europe. And perhaps all the nationalist extremism that percolated around this upheaval wouldn’t have convinced so many Italians that only Mussolini with his militaristic takeover would deliver Italy the expansionist, national grandeur so many believed it deserved. And, finally, perhaps today the city, today’s Rijeka in the Republic of Croatia, would not have witnessed heart-wrenching histories of nationalist erasure where Slavic speakers and Jews suffered exclusionary politics and violence at the hands of the Fascist and Nazi regimes, followed by tens of thousands of Italians fleeing after Fascism’s fall in order avoid a similar fate.

Musing about what might have been—or not—is fun for dinner parties, but it makes for sloppy, slippery history. What we do know: Many blamed the 1918-1921 Fiume Crisis, which led to all the extraordinary events that did happen, on American diplomatic pressure. My new book, The Fiume Crisis: Life in the Wake of the Habsburg Empire, explains why many believed the Fiume Crisis was “Made in the USA” and why that idea is wrong: Local conditions in Fiume spurred on the crisis; American interference just failed to resolve it. 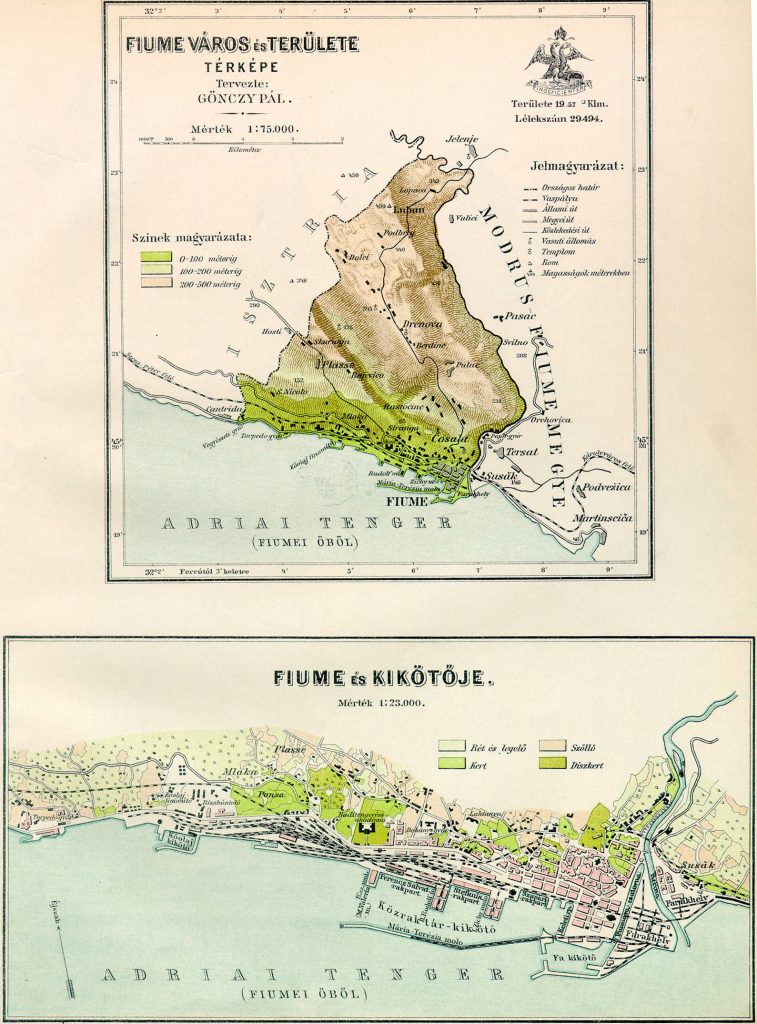 Map of Fiume before the end of World War I, when the semiautonomous city-state was part of Habsburg Hungary.

The answer to the first question is easy; the second is a bit more complicated.

While some historians agree the US helped cause the Fiume Crisis (to a point), most of the people who indicated American responsibility were Italians—largely, diplomats, publicists, and nationalist activists. The answer to why Italians believed Americans were to blame for the predicaments concerning Fiume lies in the tug-of-war of Great Power diplomacy and in a firm belief that Wilson betrayed promises he had made for a Fourteen-Points peace to end all wars.

Picture of Italians preparing to celebrate Wilson’s arrival in Rome, when Italians thought the Fourteen Points would support much of their hopes for territorial expansion in the Adriatic.

In 1918, when Wilson published his Fourteen Points, he explicitly said that the “peoples of Austria-Hungary . . . should be accorded the freest opportunity of autonomous development,” and that “a re-adjustment of the frontiers of Italy” would be promoted “along clearly recognizable lines of nationality.” When Wilson’s Fourteen Points were announced, Fiume was a semiautonomous city within Habsburg Hungary whose population was made up of almost 50% Italian-mother-tongue speakers. The city’s autonomous municipal government had declared in late October 1918 that Fiume wanted to be annexed to Italy, explaining their reasoning with words like “national self-determination.” Italy had only entered WWI because of promises of territorial expansion along the Adriatic at Habsburg expense—though Fiume was not included in these deals. Along with the statesmen, a large chunk of Italian nationalist media circles and an increasingly vocal segment of Italian popular opinion assumed that Fiume’s future was obvious. It should and would go to Italy.

Going over the Fourteen Points, one can imagine why Italians thought it would be easy to absorb Fiume into their state. Autonomous development? Well, the local autonomous government had declared its desire to be annexed to Italy: check mark. Lines of nationality? The majority of Fiume’s population could be considered Italian: check mark again. 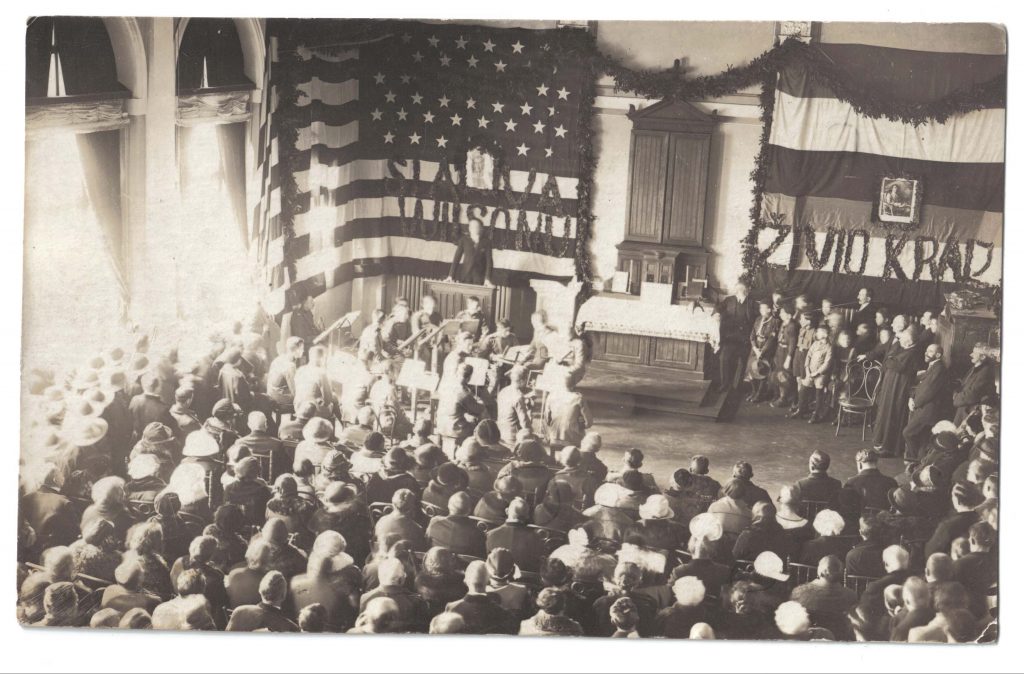 South Slav activist meeting in Sušak, a town outside Fiume, probably April 1919, with an American flag proudly displayed and a picture of Wilson in the middle, with the writing saying “Long Live Wilson!”

Whatever Italians read into the Fourteen Points before the Paris negotiations began, Wilson’s vision was the diametric opposite. Not only did he not think that Fiume should be joined to Italy, he made Fiume a showcase of his fight against Italian imperialism. So determined was he to block Italian annexation of Fiume that after months of diplomatic haggling, Wilson said explicitly that Italy would not get Fiume “so long as I am here.”[1]

And here we arrive at the core of why the Fiume Crisis can be considered an American-made fiasco: Though Wilson had said that peace would be made cooperatively, he had also collected a group of American experts—known as the “Inquiry”—to put together “guaranteed positions” on touchy diplomatic issues like Fiume. As Wilson told the Inquiry members while on their steamship voyage to Paris, “Tell me what’s right and I’ll fight for it.”[2] The six geographers, linguists, political scientists, and historians assigned to the Fiume case worked hard to develop the most appropriate geopolitical solution. They studied maps, statistics, histories, import-export charts, population data, and even sent American military personnel to investigate local conditions. And they decided, steadfastly and unflinchingly, that Fiume should go to the newly formed Kingdom of Serbs, Croats, and Slovenes (later to be known as Yugoslavia). They did not just tell Wilson this. They spelled it out in his “Little Black Book” of policies to champion. Their reasoning was mostly economic: Italy was already getting Trieste, the other large Adriatic Habsburg port, and Fiume was the only other Mediterranean port with railway connections from the Adriatic to central Europe and the Balkan peninsula. Moreover, though Fiume’s urban core counted more Italian-speakers than anything else, over 50% of the town itself did not identify as mother-tongue Italian. And if the city’s hinterlands were counted, it was Croatian and Slovene speakers who dominated, not Italians. In short, Wilson’s experts told the US president that if Italy got Fiume it would have a monopoly over Adriatic trade and tens of thousands of people who identified as South Slavs would be put under Italian sovereignty. Free-market Wilson needed to hear no more. This sounded like imperialism and bad business. It was decided: regardless of “autonomous” desires or “Italian lines of nationality,” Fiume would not go to Italy. In short, when it came to Fiume, the Paris talks were not about self-determination or nationality. They were about global free trade, and the Americans had made this decision about Fiume before anyone had walked into the negotiations. 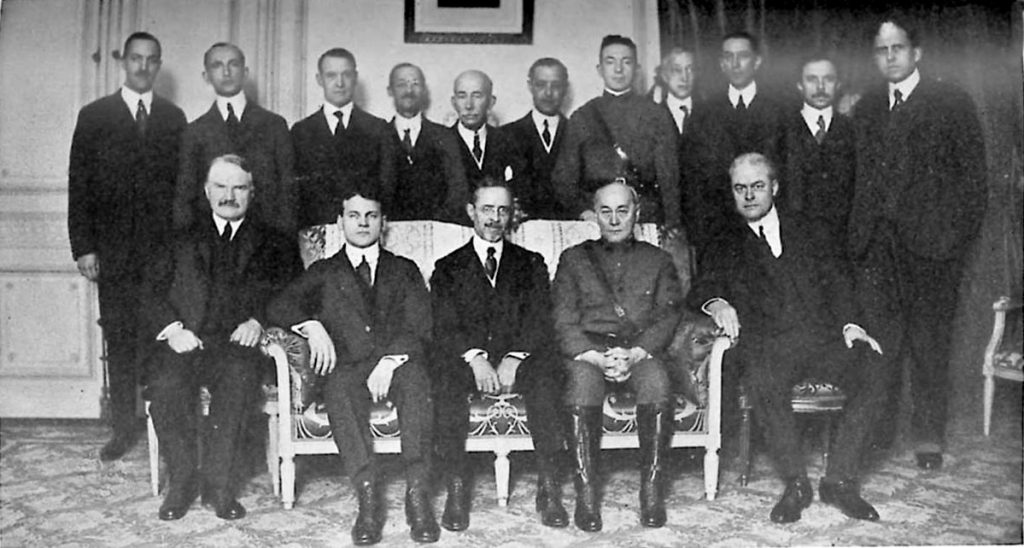 To Italians in Paris and within the Italian peninsula, this sounded like Wilson was going against the very Fourteen-Points values he had stated so self-righteously. With all the earmarks of American imperialism, it also seemed an injustice: there was one set of rules for the strongest countries (UK, France, USA) and another set for the rest. Very vocal segments of the Italian population felt like they were getting shafted, like their hard-fought, but glorious victory over Austria-Hungary was being “mutilated.” (This phrase, heard everywhere at the time, was coined by the same poet-dictator who would arrive so dashingly in Fiume just a few months later).

Things were tense. But then they got worse when Wilson made a serious diplomatic miscalculation. On April 23, 1919, after another fruitless, frustrating meeting with the Italian delegation, Wilson decided to go over the diplomats’ heads and directly ask Italians to demand their government relinquish Fiume to the Kingdom of Serbs, Croats, and Slovenes. Against the advice of British, French, and American advisers—who pointed out that this direct appeal to a population is what leaders did when dealing with enemy governments, not allies—Wilson released to the newspapers a public plea asking Italians to trust him, to be generous on behalf of world peace, and give up Fiume.

The result was pandemonium. The Italian delegation walked out of the negotiations. The Italian public rallied against Wilson’s insult to their leaders and their rights to Fiume. International diplomacy fell apart. And Fiume became the symbol—the living diplomatic embodiment—of global bullying. For many Italians, even those who had never heard of the town before all the hubbub, Fiume became an emblem of national pride and international victimhood. Annexing Fiume quickly turned into a rallying cry for nationalist groups—many of whom were filled with disgruntled veterans and restless youth. “Fiume or death!” burst from the lips of ever more Italians. And activists in Fiume eager for annexation to Italy responded, “Italy or death!”