Skip to content
From Vienna and the Scheu House: Elizabeth Scheu Close, Architect, Part One 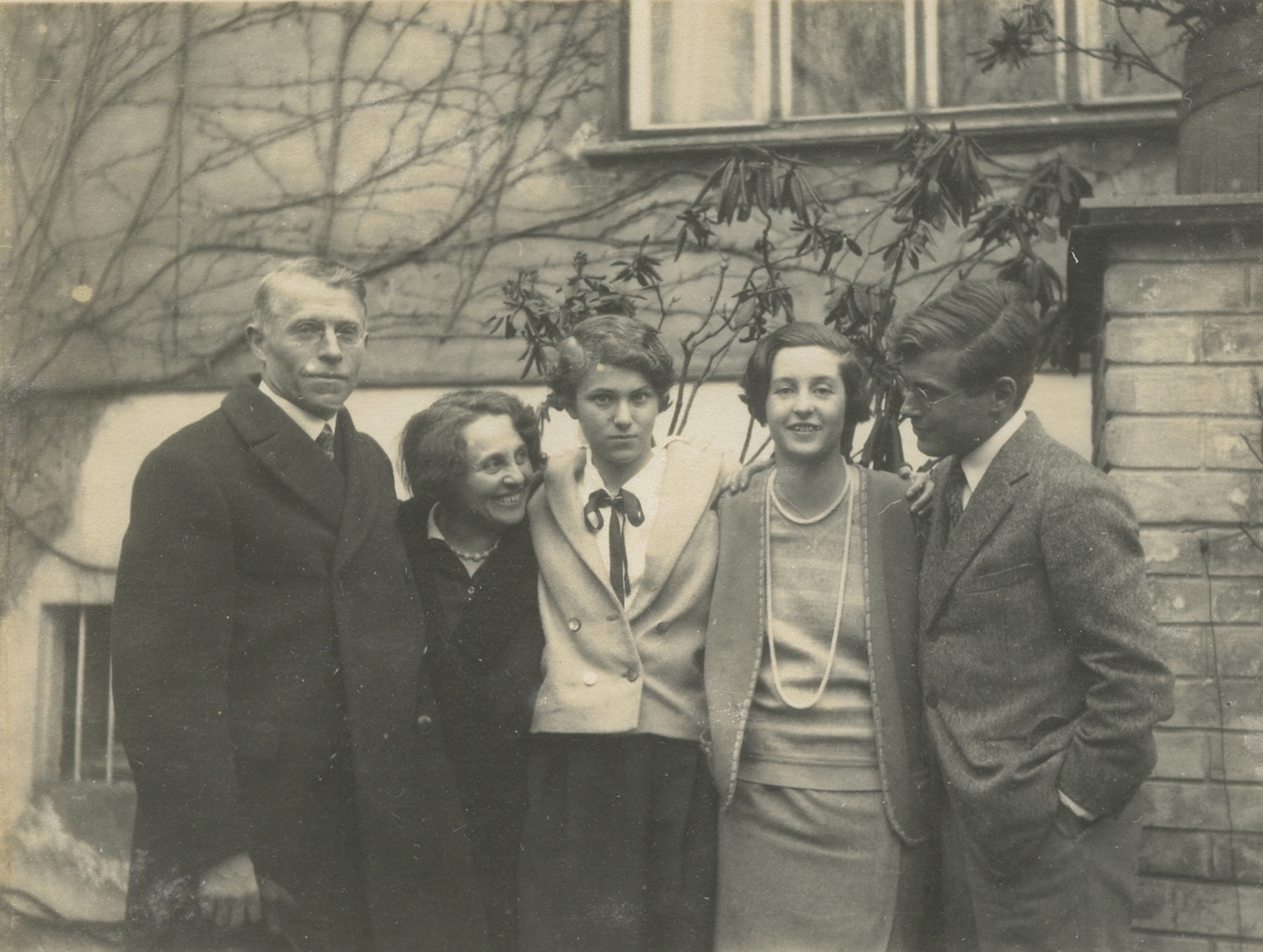 From Vienna and the Scheu House: Elizabeth Scheu Close, Architect, Part One

Elizabeth “Lisl” Scheu Close (1912-2011) was Minnesota’s first modern architect. As the designer of more than 250 custom residences, several medical and laboratory facilities, and dozens of prefabricated house models from which 10,000 homes were produced, she was also one of the most prolific Austrian-born architects of the 20th century. Although she lived all but twenty of her ninety-nine years in the United States, her life and career were profoundly shaped by her early years in Vienna, notably her family history, her architecturally significant home, and the many international visitors she encountered there.

One of Lisl’s earliest cross-cultural experiences occurred on June 2, 1919, when representatives of the American Relief Administration’s (A.R.A.) European Children’s Fund, Austrian dignitaries, and invited guests gathered in the Augarten, a large public park in Vienna. The occasion was a ceremony recognizing the A.R.A. for its humanitarian efforts to alleviate the hunger and deprivation suffered by Vienna’s children in the aftermath of World War I.  Six-year-old Elizabeth Scheu was one of the speakers that day. On behalf of the children of the city, she welcomed the American contingent and recited a poem of gratitude, in English, for their life-saving initiatives. Decades later, she remembered the poem began “American men and American women, thank you.”[1] 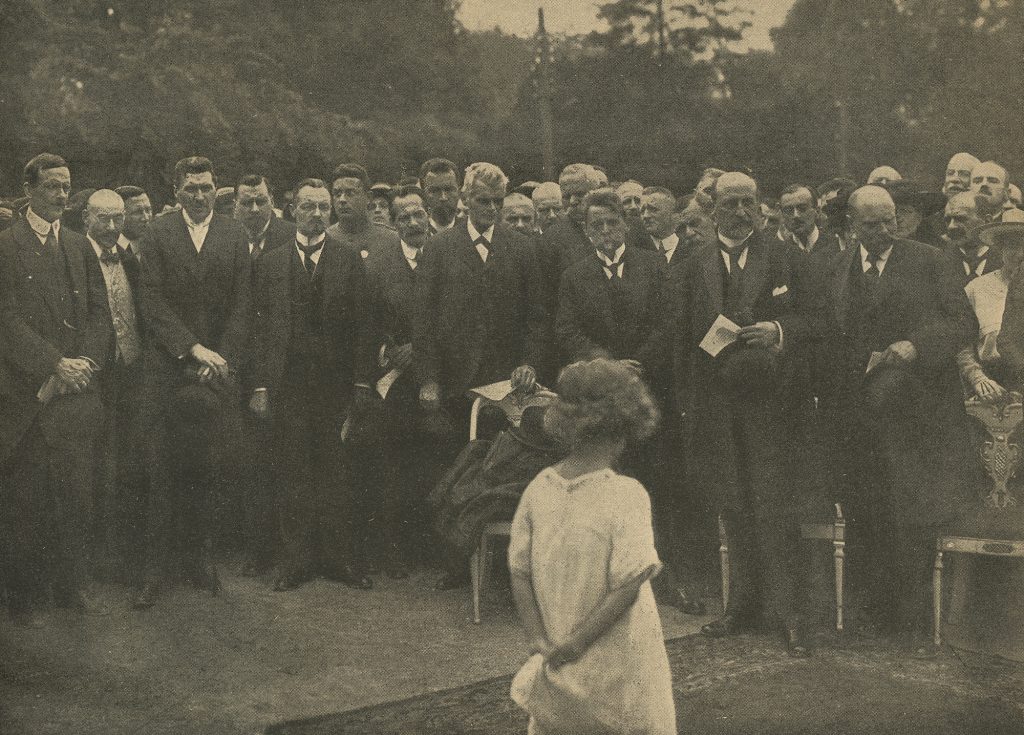 The responsibility for this considerable task was placed on Lisl’s small shoulders for two reasons. First, she spoke English as she had learned the language from her British nanny. More significantly, she was the daughter of Gustav Scheu, a lawyer and prominent Social Democrat. At the time of the ceremony, Scheu was councilor for housing matters for “Red Vienna,” as the era of social democratic leadership between 1919 and 1934 was known. He was no stranger to politics. His father, Josef Scheu, was a founder of the Austrian Social Democratic Party and a classically-trained musician who composed the Party’s work song, the “Lied der Arbeit” in 1867. Josef’s brothers, Andreas and Heinrich, were also involved with Social Democratic movements in the United Kingdom and Switzerland, respectively. Given this family history, it was not surprising that Scheu enlisted his daughter in the cause.

However, the Augarten event was not the first time in her young life that Lisl found herself in the company of Austria’s political elite or visitors from other parts of the world. Her home, the Scheu House at 3 Larochegasse in Vienna, had long been a gathering place for a global array of politicians, artists, musicians, journalists, and others. Many visitors came because of the intellectually lively salon that Gustav and his wife, Helene Scheu-Riesz, a translator and founder of the children’s book publishing house Sesam-Verlag (Sesame Books), hosted in their home. But others were drawn to the villa because it was one of the most architecturally significant—and controversial––buildings in the city.

In 1912, the year of Lisl’s birth, the Scheus commissioned early modern architect Adolf Loos to design the house in Hietzing, a district steeped in tradition, rich in baroque architecture, and flush with imperial associations. Schönbrunn Palace and Gardens, now a UNESCO World Heritage site but once a summer home of the Habsburgs, stands less than two miles from the Scheu House. Many well-to-do families gravitated to Hietzing where they built opulent villas, but the Scheu House was a villa of a different kind—a radically modern one that was a much-debated addition to the staid neighborhood. As Loos later wrote, “Years ago I built the house of Dr. Gustav Scheu in Hietzing, Vienna. It aroused general disapproval . . . one person went to the Municipal Council to ask if this type of building was permitted by the law.”[2] 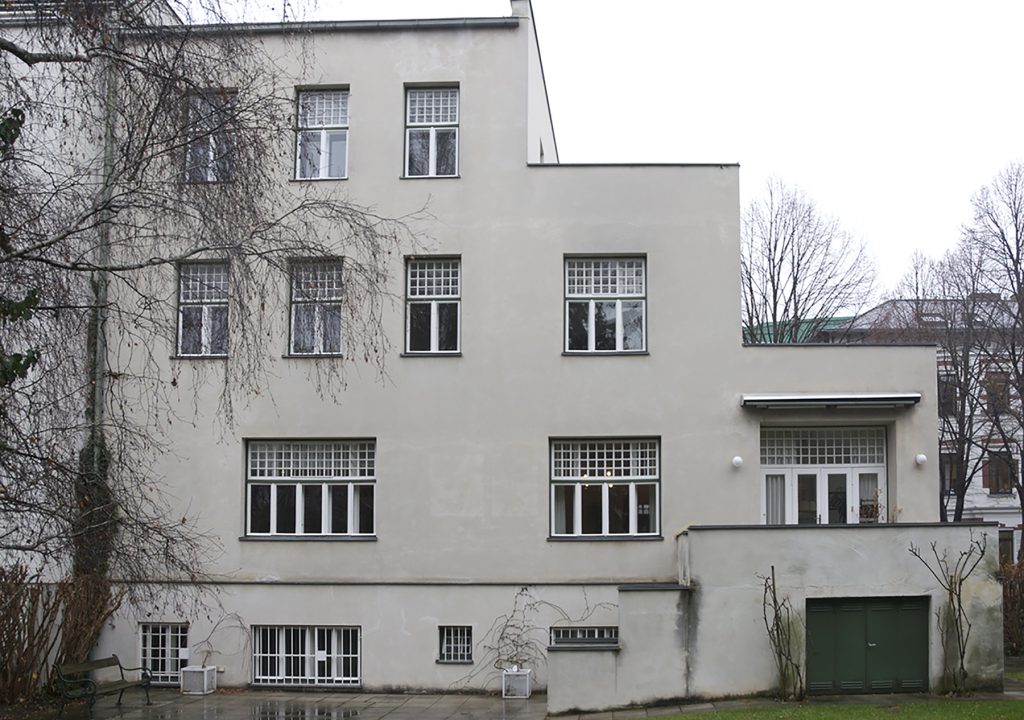 Garden view of the Scheu House in Vienna, Austria, designed in 1912 by architect Adolf Loos.
Photograph by William B. Olexy, 2010.

The Scheus first met the Moravian-born Loos through Gustav’s brother, Robert, a journalist and one-time secretary of the Austrian Chamber of Commerce. Prior to commissioning him, they would have been familiar with Loos’s buildings in Vienna, including the Café Museum (1899), the Kartner Bar (1908), and the Steiner House (1910), his first modern villa in Hietzing. They also knew he was an iconoclast. When they hired him, Loos was at the center of a firestorm of controversy ignited by his design for the Michaelerhaus (also known as the Looshaus), a multistory retail/apartment complex that stood across a plaza from the Hofburg, the imperial palace of the Hapsburgs. The heart of the uproar was the total lack of ornamentation on the building’s façade. An injunction to block construction was lifted with the provision that flower boxes be added to the building’s upper stories. The Scheu House would create similar dissension, as the Scheus well knew.

For the couple, Loos designed a three-story, flat-roofed house in which the two levels above the ground floor were successively smaller in area, thereby creating spaces for outdoor terraces. The unprecedented design—reputedly the first terraced house in Central Europe–– was deemed by authorities to be “fine in Algiers, but not in Vienna.”[3] Its unusual stepped profile earned the villa the derogatory nickname “the giant’s staircase.” Further objections were raised because, like the Michaelerhaus, the smooth white stucco façade of the Scheu House was completely unadorned. The Scheus were granted a building permit on the condition they grow ivy up the bare walls.

As he often did in his buildings, Loos contrasted the stark exterior of the house with warm, textural interiors, wood-beamed ceilings, and an intimately-scaled fireplace inglenook. Lisl would later bring similar material warmth to her designs. 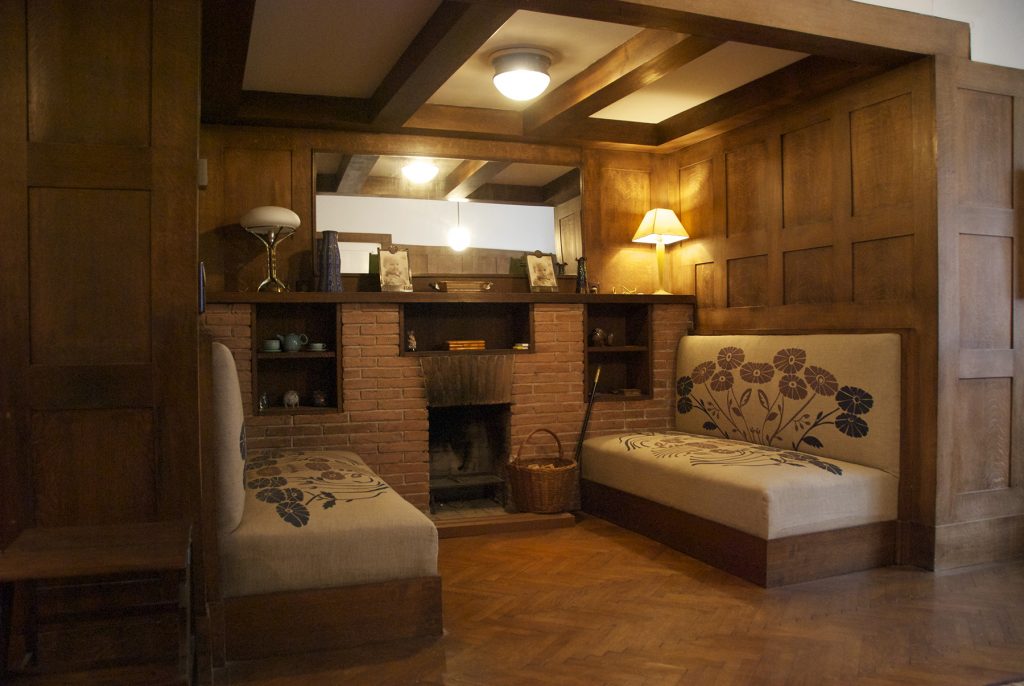 Inglenook in the Scheu House in Vienna, Austria. Photograph by William B. Olexy, 2010.

When the Scheus moved into the house, Loos presented them with a leather-bound guestbook, which he was the first to sign. This now historic volume documents the astonishing array of people–many of whom were or would become world renowned-–whose conversations enlivened the Scheu House salon for more than half a century. It also offers an indelible impression, from the perspective of one extraordinary family and house, of the richly creative, politically volatile city that was Vienna before, between, and after two world wars.

Many visitors were friends or colleagues of the Scheus, while others were members of international groups with which they were associated, including town planners or advocates of the Garden City movement. Red Vienna scholar Eve Blau believes the house “functioned as the intellectual and spiritual center of the Austrian garden city movement,” and the “left-leaning intellectuals and artists,” who gathered there.[4] Many Quakers, pacifists, and suffragists also congregated in the house. One of the most distinguished proponents of peace and social welfare to sign the guestbook was Jane Addams, the founder of Chicago’s Hull House and a future Nobel Peace Prize laureate.

Among the Austrian artists who came were acclaimed expressionist artist Oskar Kokoschka, Mela Kohler, a painter and printmaker associated with the Wiener Werkstätte, and architect and graphic designer Josef Frank. Visits by Austrian architect Richard Neutra and Dutch architect Aldo van Eyck are also documented. Several artists contributed impromptu sketches of Lisl, as a child and a young woman, to the book.

The house became a magnet for those in the forefront of modern design. “We had a constant influx of visitors,” Lisl recalled.[5] She was “indoctrinated” by the house and through it learned that architecture was an important subject. For this reason, she decided to pursue a career in architecture and to focus on modern design.

In 1930, Lisl began her architectural education at the Technische Hochschule, but soon found conditions there to be intolerable due to the faculty’s hostility toward women. Because of Helene’s Jewish parentage, the situation in Vienna would soon become dangerous for Lisl and her older brother, Friedrich, who was studying law at the University of Vienna. Although Helene did not consider herself to be Jewish–and did not raise her children as Jews–it was a dangerous point to debate in Austria at the time.

When she most needed it, a frequent visitor to the Scheu House offered Lisl a lifeline. Boston department store magnate and philanthropist, Edward Filene, encouraged her to continue her studies at the Massachusetts Institute of Technology (MIT), offered her financial assistance, and arranged her safe passage to the United States. Prominent Cambridge city planner, John Nolen, whose daughter had been married in the garden on the Scheu House in Vienna in 1927, offered Lisl a place to live. She thrived at MIT, where she earned her undergraduate and graduate degrees in architecture by 1935.

That same year, Gustav Scheu died in Vienna. Helene moved to the United States two years later. In 1938, Friedrich, who was then a Vienna-based correspondent for the London Daily Herald, narrowly escaped Austria and eventually settled in England. Miraculously, the Scheu House survived the war intact and in possession of members of the extended Scheu family, one of whom was “close to the Nazis.”[6] Helene returned to the house in 1954 and remained there until shortly before her death in 1970. The house was later sold.

When Lisl left Austria for America, she brought with her an unshakable commitment to modernism and the belief that architecture could serve a greater good. These two principles would shape her long, productive architectural career in the United States.

In 2001, at age eighty-nine, Lisl travelled back to Vienna for one final time to return the guestbook to the city “where it was born.”[7] It is now in the collection of the Wien Museum.

Jane King Hession is a Minneapolis-based architectural historian specializing in modernism. She is the author of Elizabeth Scheu Close: A Life in Modern Architecture (University of Minnesota Press, 2020). A former president of the Frank Lloyd Wright Building Conservancy, she is the coauthor of John H. Howe, Architect: From Taliesin Apprentice to Master of Organic Design, and Frank Lloyd Wright in New York: The Plaza Years, 1954–1959. She earned her M.Arch from the University of Minnesota.