Skip to content
Edith Sampson in Austria: The Promise and Limits of Person-to-Person Diplomacy in the Early Cold War 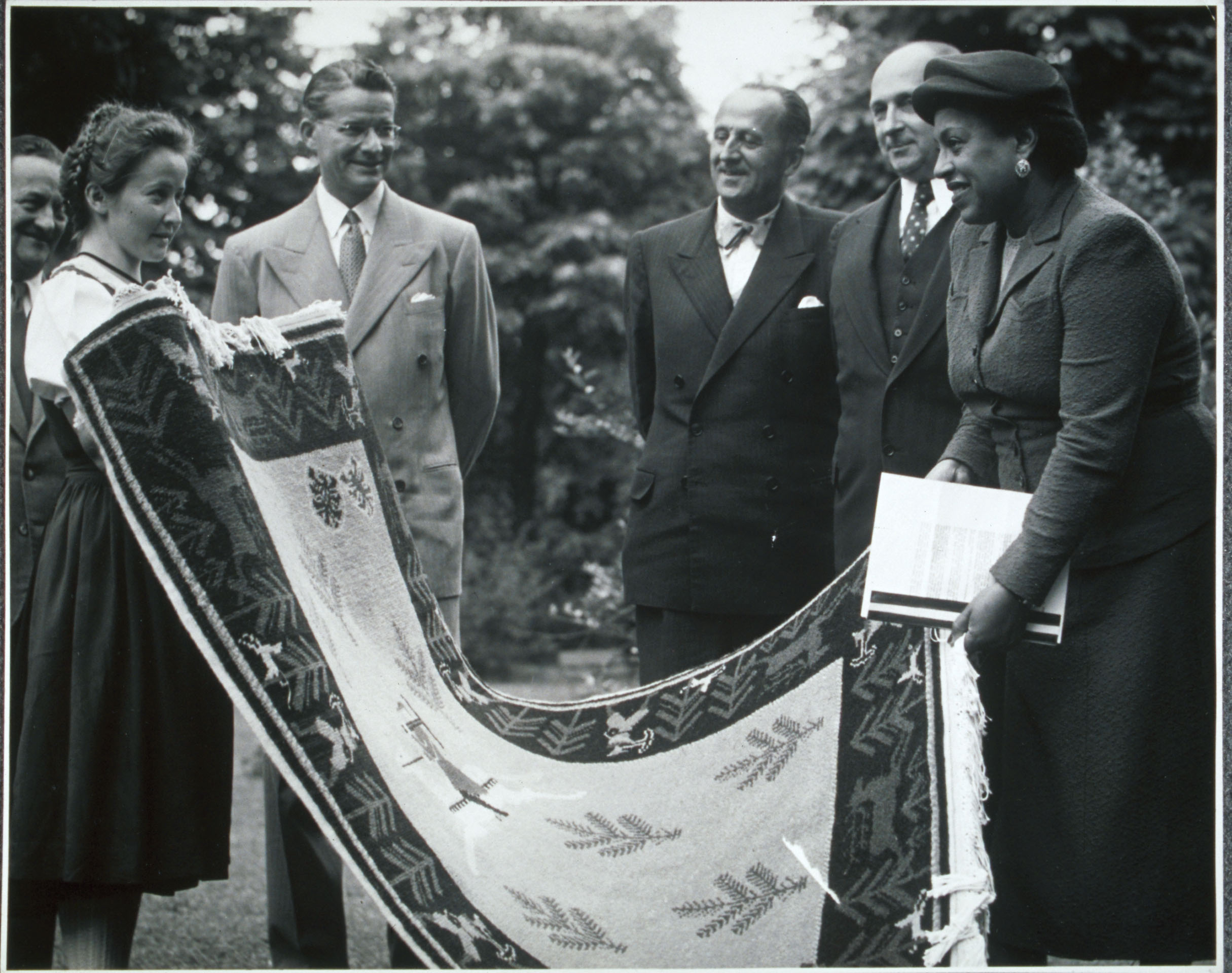 Edith Sampson in Austria: The Promise and Limits of Person-to-Person Diplomacy in the Early Cold War

In the first week of June 1951, Edith Spurlock Sampson, a fifty-year-old African American attorney from Chicago’s South Side, arrived in Vienna as a goodwill ambassador under the auspices of the United States Information Service (USIS). Sampson had achieved international celebrity status the previous year after President Truman named her as an alternate delegate to the United Nations, making her the first African American woman to represent the United States in any official capacity. Sampson’s race was integral to her appointment, which the president himself touted as “an answer to Soviet propaganda regarding the Negro.”[1] Recognizing that American race relations provided ready ammunition to the Kremlin and actively hindered the spread of American influence abroad, especially in the newly independent nations of Africa and Asia, the State Department searched for a response to what many officials regarded as the “Achilles’ heel” of U.S. foreign policy.

The resulting strategy led the State Department to actively court successful African Americans like Sampson to assist in a massive inter-agency campaign to “explain American progress against discrimination” to foreign audiences.[2] At the UN, Sampson quickly established herself a gifted practitioner of person-to-person diplomacy, and an unconventional, but effective Cold Warrior. Sampson’s ebullient personality and “relish for the personal touch” made her especially adept at the sort of informal diplomacy that flourished at the numerous dinners, receptions, and galas frequented by foreign officials, embassy staff, and other doyens of New York’s international set.[3] At the same time, Sampson’s vocal anti-communism and willingness to confront Soviet delegates on hot-button issues like radio jamming and the repatriation of prisoners of war would earn her a reputation as a hard-nosed negotiator and a “thorn in Russia’s side.”[4] It was this unique combination of charm and toughness that prompted the State Department to tap Sampson for a goodwill mission to Austria, a neutral nation at the epicenter of the Cold War in Europe that remained under joint allied occupation in 1951.

Sampson’s Austrian tour kicked off in June 5 in Vienna, when Walter Donnelly, the American High Commissioner for Austria, and Dr. Karl Gruber, the Austrian Minister of Foreign Affairs, hosted a welcome reception in her honor. That evening, Sampson gave a public lecture on the topic of, “The Negro Problem in the United States,” at the American Information Center. The talk, which Sampson would reprise in dozens of European cities over the next three years, acknowledged the existence of racial discrimination in the United States while striking an optimistic tone by emphasizing the racial progress African Americans had achieved. As Sampson began her speech, the editor of a Communist newspaper loudly disrupted Sampson’s talk. As he attempted to storm out of the hall, Sampson blocked his exit, embraced him, and exclaimed, “I like you, darling, and I think can convince you that I’m right.”[5] Sampson’s hug had defused a tense situation, though the heckler was likely behind an scathing editorial published the following day that described Sampson as a “notorious itinerant preacher of the American imperialists [who] camouflaged [the] bloody crimes of the American KKK gangsters.”[6] Such attacks did not bother Sampson. On the contrary, she relished the fight and considered communist brickbats as a badge of honor.

In contrast to the disgruntled editor of Die Oesterreichische Zeitung, Sampson’s hosts at the Austrian American Institute of Education (AAIE) pronounced her visit an unvarnished success and exalted Sampson as “America’s Ambassador 1951 Style.” According to the official AAIE report, the proverbial Viennese man on the street was left with the impression of a “woman who knows our problems and who does not sell us any propaganda stuff.”[7] This statement, of course, belied the entire purpose of Sampson’s visit, but nevertheless represented a high compliment in a nation inundated by a steady stream of propaganda since the Anschluss in 1938.

Far more than her oratorical skills, it was Sampson’s ability to engage with ordinary citizens and connect with audiences that impressed State Department officials like Chester Williams. Williams marveled at Sampson’s “unusual magnetism in personal and group relations” and later recommended that her official remarks be kept short so as to maximize opportunities for unscripted exchanges in question and answer sessions.[8] The rest of Sampson’s Austrian itinerary encapsulated the strategy of person-to-person diplomacy that the State Department had begun to embrace. There were visits to local schools where Sampson posed with smiling children, a photo-op at the headquarters of the Cooperative for American Remittances to Europe where Sampson handed out “CARE” packages filled with supplies, and a trip to Salzburg where Sampson met with African American servicemen in the 576th Car Transport Company stationed at Camp Truscott. In Tyrol, Sampson was presented with an ornamental carpet from the people of Inner Pitztal in gratitude to President Truman for the economic aid the region received through the Marshall Plan. Each stop provided a platform to promote stronger Austrian-American relations and create a bulwark against Soviet influence.

Sampson also traveled to Linz at the invitation of the Austro-American Society and the U.N. League of Austria where she visited the Wegscheid Displaced Persons camp. This stop held particular significance for Sampson, who had worked diligently to focus international attention on the plight of issue displaced refugees and prisoners of war while at the UN. In recognition for Sampson’s devotion to this issue, one local German newspaper pronounced her “the Black Angel of the Prisoners of War.”[9] Recast in a more traditional feminine role with religious overtones, many stories in Germany and Austria hailed Sampson as the maternal protector of a vulnerable group.  In response to several short radio segments she recorded for the Voice of America, relatives of prisoners of war in Germany and Austria sent more than one hundred letters to Sampson, further bolstering her reputation in these occupied nations. Sampson’s Austrian tour, which lasted less than two weeks, seemed to demonstrate the potential of a new strain of American diplomacy based on what scholars would later call soft power.

Significant cracks in the State Department’s new information offensive, however, had already begun to appear. Sampson’s Austrian trip overlapped with a campaign coordinated by the Communist-affiliated Civil Rights Congress (CRC) to focus global attention on the cases of Willie McGhee, the Martinsville Seven, and the Trenton Six, all of which in African American men facing death following convictions for rape or murder by all-white juries. The high profile cases were covered in the Communist press of Austria. When Austrians brought them up, Sampson could only offer a mealy-mouthed defense. These incidents, she insisted, “did not represent the general administration of justice, but the exception,” before shifting the blame to “enemies of America” who cynically sensationalized isolated incidents of racial violence and injustice in order to distort the reality of African American life.[10] As hard as Sampson and the State Department tried to project an image of nation moving beyond its racist past, the present kept spoiling this optimistic narrative with fresh outrages.

Just after Sampson returned from Austria in early July of 1951, a mob in Cicero, Illinois forcibly prevented an African American veteran and his family from moving into a home in the all-white suburb while police stood by. For two days, the mob ransacked the house, burned furniture, and rioted until the National Guard restored order. For Sampson, who lived and worked not far from Cicero, the riots hit close to home. “What’s happening here in America?” Sampson asked in an emotional editorial published in Negro Digest four months later. “Do not forget that our nation bears the torch of liberty that is expected to light the way for other nations of the world […] Don’t let that torch grow dim through acts like Cicero.”[11]

The next year, Sampson failed to receive an invitation to a reception honoring the Austrian Ambassador held in her hometown of Chicago. The oversight was baffling to Sampson. After all she had befriended the ambassador and his wife on her goodwill tour of Austria just one year earlier. Beyond her personal disappointment, Sampson also recognized a fundamental contradiction in the State Department’s cultural relations strategy in the snub. “Our program is inconsistent,” she told Walter Donnelly, the US High Commissioner to Austria. “We go forth to tell people in other countries about the American way of life and about the changing status of the Negro in the United States, yet when foreign visitors come to see democracy in action there is no planning attempted so that they might meet Negroes groups or visit Negro institutions.”[12] For Sampson, the State Department was missing an opportunity to fully utilize the tremendous human capital of Black America and limiting the potential for more genuine cultural exchange to break down the barriers of race as well as ideology. Sampson was further dismayed at the State Department’s sponsorship of a European tour of the musical Porgy and Bess in the fall of 1952. Audiences, including Austrians, would be given a sordid and scandalous view of African American life, rather than the dignified portrait of hard won success and progress that Sampson had worked so hard to cultivate in the minds of foreign audiences. In this context, Sampson’s Austria tour simultaneously represents a triumph for African American diplomacy and commentary on its limitations to affect lasting change. 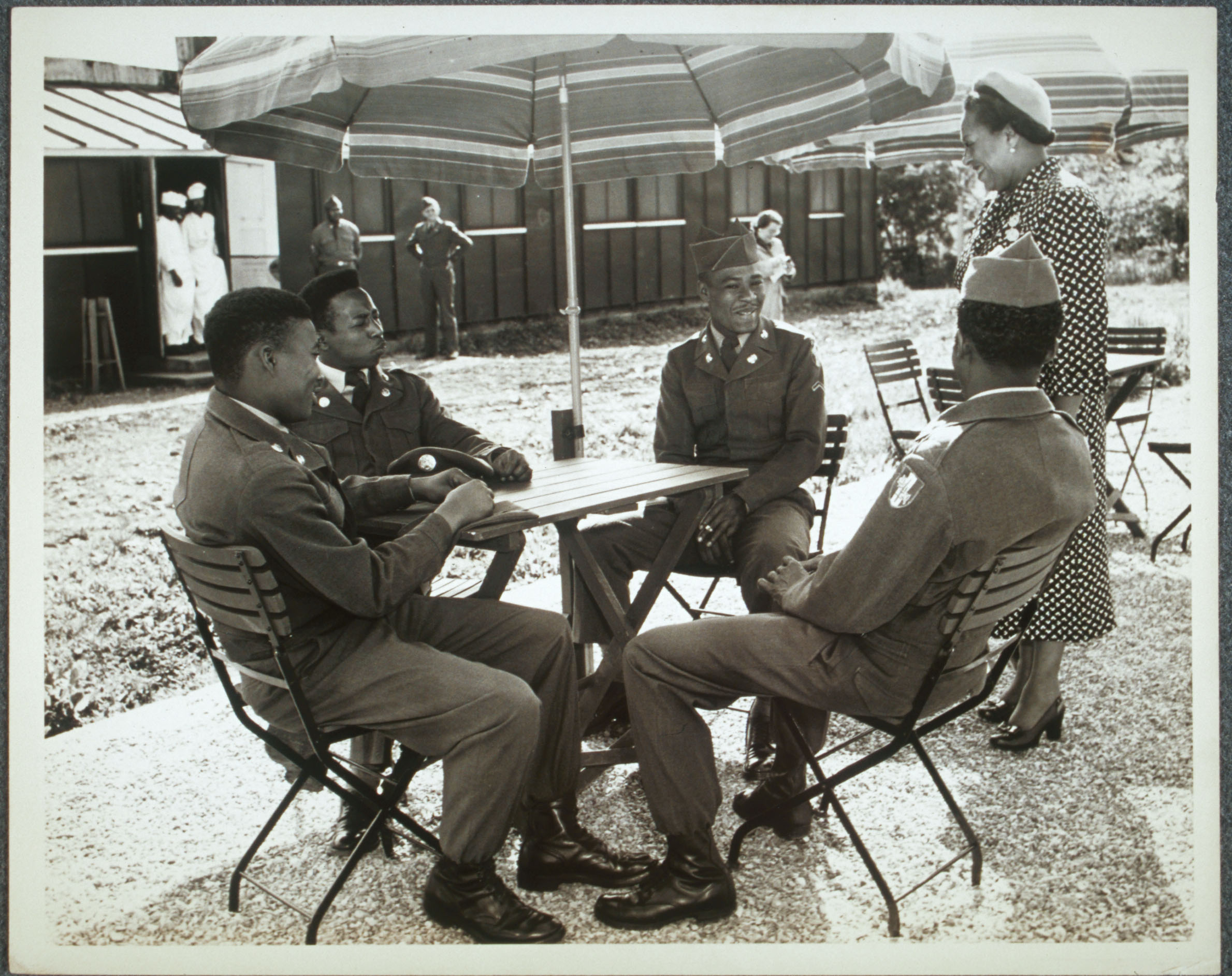 Dr. Athan Biss is a graduate of Princeton University and received his doctorate in American History from the University of Wisconsin-Madison. His dissertation, “Race Diplomacy: African American International Diplomacy, 1855-1995,” examines the strategies employed by African Americans to achieve domestic gains through international engagement. He currently teaches history and politics at the Baldwin School in Bryn Mawr, PA.