Skip to content
Constitutional Connections: The Emperor’s Brother and the United States of America 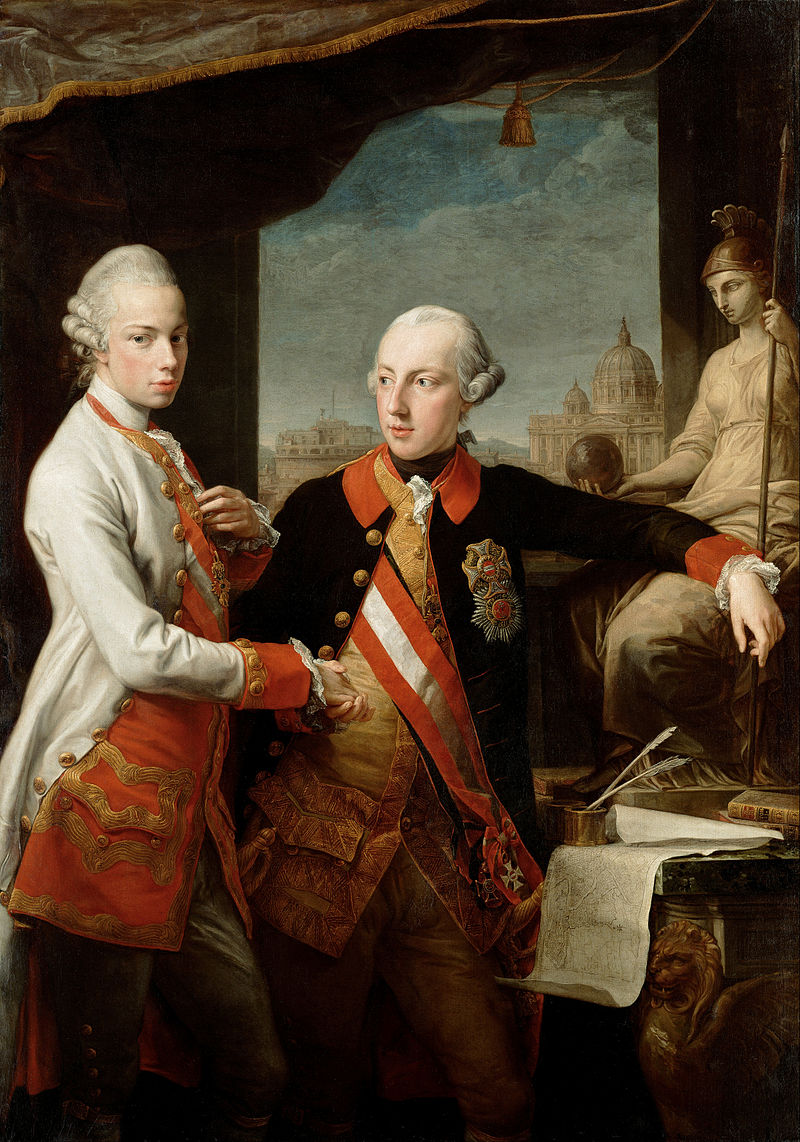 Constitutional Connections: The Emperor’s Brother and the United States of America

On March 8 1779, the Grand Duke Leopold I of Tuscany left Vienna for Florence in a rather disgruntled mood. Over the past year he had deputized for his brother, the Holy Roman Emperor Joseph II, while he was away commanding in the War of the Bavarian Succession. Leopold felt horrified at the running of the state in the Habsburg capital. Finances were poor, subjects were displeased, and, worse, Leopold felt Joseph only uttered “frightful, despotic statements.”[1]

As Leopold travelled back to Tuscany he wrote down his frustrations across some three-hundred handwritten pages. In the largest of his cathartic essays, his Riflessioni sopra lo stato della Monarchia (Reflections on the State of the Monarchy), Leopold scathingly analyzed every aspect of his brother’s dominion and concluded something must be done.[2]

Upon his arrival in Florence on March 23, Leopold set about a new project, aimed at preventing any tyrannical leadership for his own subjects in Tuscany. In his Primo ed Idee sopra la formazion delgi Statu e nuova Constituzione pubblica (First Draft and Ideas of the Formation of the State and a New Public Constitution), Leopold prepared to relinquish his absolute power as a monarch in order to allow the governed populace more say in state affairs.[3] Such ideas, Leopold felt, were more in line with the ideals of the Enlightenment as expressed by French philosophers, whom he deeply admired.[4]

Leopold’s new constitutional ambitions owed more to American than French thinkers, however. In one section of his Primo ed Idee, Leopold declared everyone in his society had “an equal right to happiness, well-being, security and property.”[5] The familiar sounding line is unequivocally American. A few years earlier, two newspapers in Leopold’s Tuscan capital published complete translations of the Declaration of Independence with the similarly immortal phrase, “life, liberty, and the pursuit of happiness.”[6] But another American declaration might have inspired Leopold; in June 1776, the Virginia Convention adopted George Mason’s Declaration of Rights, which also proclaimed the rights to “life and liberty, […] property, and pursuing and obtaining happiness and safety.”[7]

Leopold’s news plans contained many echoes of the Virginian Declaration of Rights, yet it was Pennsylvania’s constitution—adopted later in 1776—that provided Leopold with concrete ideas about how best to enact more enlightened government.[8] Leopold studied a French translation of the Pennsylvanian constitution intently, producing a handwritten copy and his own ten-page ‘Observations.’[9] Leopold’s notes were his gut-reactions to the ideas he encountered in the American text, offering a fascinating insight into a Habsburg prince’s first-hand take on the radical democratic experiments unfolding across the Atlantic.

Leopold’s ‘Observations’ opened with a bold declaration of his own admiration for American political ideas: “What I ask is that, in order to make a good [legal] code in all states, even in monarchies, one begins with the principle posed by the Americans, the principle of equality.”[10] Leopold saw this core American value as the basis for any good form of government; “political equality,” he later noted, “is essential to the democratic order […] there should be no exception for anyone.”[11] In his view, the safeguarding of this equality clearly existed in Pennsylvania’s constitution through innovations such as limited terms and the rotation of positions, which Leopold felt would eradicate any abuses of power.

For the next three years Leopold toiled away on his constitutional project, swapping ideas and drafts with one of his advisors, Francesco Maria Gianni.[12] Concerning the extension of what Leopold termed peoples’ “sacrosanct natural rights”—another allusion to “unalienable rights” in the Declaration of Independence perhaps—and Leopold’s calls for wider democratic participation, Gianni frequently dissented. Gianni saw the Tuscan people as unfit for democratic duty. The notorious Medici family had ruled Tuscany for the better part of three centuries before the Habsburgs took control in 1737; such a legacy, Gianni claimed, had corrupted the Tuscan people beyond recognition. They could not be entrusted to act for the greater good.[13]

As much as Leopold felt compelled to endow his subjects with greater rights to protect them against the despotisms he had witnessed in Vienna, his constitutional project went nowhere. Most likely Leopold felt Gianni was right. In an earlier study of his Tuscan holdings, Leopold acknowledged that his people possessed a “certain shrewdness” or “deception” and were “always divided amongst themselves.”[14] In his Pennsylvanian ‘Observations’ Leopold conceded, “When one understands the human heart, one sees how difficult it is to sustain governments at a certain degree of perfection. It is men who govern and [for perfect government] it would be necessary that the leaders be above man, that they be angels.”[15]

Any ambition to issue extended suffrage to the people of Tuscany ended by 1782 when Leopold abandoned his plan to democratically reform his territory. His study of American constitutionalism, however, outlived this project. In February 1790, Leopold ascended to the Austrian throne, succeeding his brother as Holy Roman Emperor Leopold II, but inheriting a fractured Habsburg Empire with multiple revolts. In order to rescue the Empire and to pacify the various regional estates and provincial magnates, Leopold established a period of “constitutional revival,” sweeping away the “managerial despotism” of his brother’s rule and ushering in his deep-seated commitment to “consensual government.”[16] One of the most drastic and effective reigns, however, came to a sudden end when Leopold died in March 1792.

The Pennsylvania Constitution of 1776 has been recognized as one of the most radical and influential state constitutions in American history.[17] Leopold’s profound interest in this example of American constitutionalism shows the wider influence that the American Revolution held for the development of political thought in Habsburg Tuscany.

Axel Körner, America in Italy: The United States in the Political Thought and Imagination of the Risorgimento 1763-1865 (Princeton and Oxford: Princeton University Press, 2017).

Robert F. Williams, “The Influences of Pennsylvania’s 1776 Constitution on American Constitutionalism During the Founding Decade,” Pennsylvania Magazine of History and Biography, Vol. 112, No. 1(January, 1988), 25-48.

Biography of Leopold (in German): http://www.habsburger.net/de/personen/habsburger-herrscher/leopold-ii

Transcription of the Pennsylvania Constitution of 1776: http://avalon.law.yale.edu/18th_century/pa08.asp

Religion and the Pennsylvania Constitution of 1776: https://thewayofimprovement.com/2017/03/15/religion-and-the-1776-pennsylvania-constitution-a-short-series-part-7/

Final draft of the Virginia Declaration of Rights: http://www.gunstonhall.org/georgemason/human_rights/vdr_final.html

The Virginia Declaration of Rights and the US Constitution: http://edu.lva.virginia.gov/online_classroom/shaping_the_constitution/doc/declaration_rights

Transcription of the Declaration of Independence in the Gazetta Universale (Florence), September 14, 1776: http://chnm.gmu.edu/declaration/italian1.html

[8] In contrast to the works cited above, only a few historians have correctly identified that it is indeed the Pennsylvanian Constitution of 1776 which influenced Leopold’s constitutional project. See Wandruszka, Leopold II, Vol. I, 372-373; Ulrich Schuener, “Constitutional Traditions in the United States and Germany,” in Wilhelm A. Kewenig, ed., Deutsch-Amerikanisches Verfassungsgeschichtssymposium 1976: Pressfreiheit und Finanzverfassung im Bundesstaat (Berlin: Duncker und Humblot, 1978); Paula S. Fichtner, “Viennese Perspectives on the American War of Independence,” in Béla K. Király and George Barany, eds., East Central European Perceptions of Early America (Dordrecht: Peter De Ridder Press, 1977), 19-32; Gerald Davis, “Observations of Leopold of Hapsburg on the Pennsylvania Constitution of 1776,” Pennsylvania History: A Journal of Mid-Atlantic Studies, Vol. 29, No. 4 (October, 1962), 373-380. After viewing the original manuscripts at the HHStA, I can concur with their findings that the Pennsylvania constitution was Leopold’s primary object of fascination. See Leopold’s own handwritten ‘Observations sur les Constitution de la République de Pensylvanie’ in HHStA, Hausarchiv, Sammelbände, K. 13, No. 10.

[12] The numerous memorandums and drafts exchanged between them are found in HHStA, Hausarchiv, Sammelbände, K. 12, Nos. 13-21.