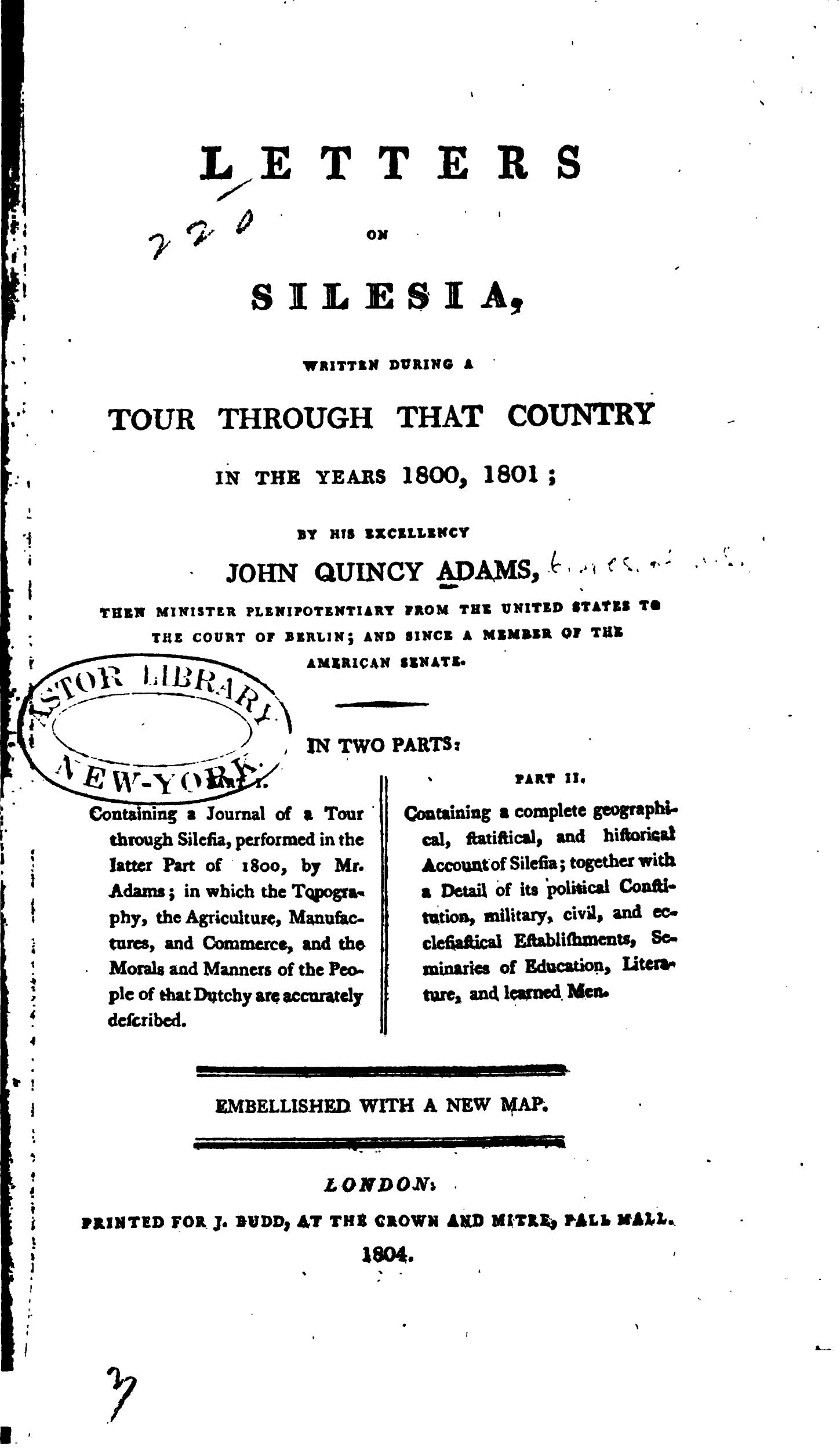 Today I would like to recount John Quincy Adams’s visit to a Silesian weaver’s home in 1800 to share the delightful and unexpected insights that historical research into European-American connections can bring. My book project reconstructs the American community in Dresden, Germany, from the late 1700s to World War I, and Adams, later to become the sixth president of the United States, was among the first U.S. Americans to travel extensively in Central Europe. Through his publications, he was certainly the most prominent early American to familiarize audiences at home with the region’s more remote parts. Even though I first read his famous travel account Letters on Silesia with an eye toward his impressions of Dresden only, I was soon struck by the myriad rich details conveyed in its pages.

In 1801, Adams, who had been appointed the U.S. minister resident to the Prussian court by his father in 1797, published his “Journal of a Tour Through Silesia,” which he’d completed a year earlier, in the form of serialized letters to his brother Thomas in the Port Folio, the most influential early American magazine dedicated to politics and literature.[1] The letters—written with publication in mind from the outset—subsequently appeared as a standalone book titled simply Letters on Silesia. Credit for their genesis likely belongs to William Vans Murray, an erstwhile Maryland delegate to the House of Representatives. In October of 1800, he had encouraged Adams to give an account of his tour of Silesia for the American public. This, to Murray, was the duty of every American who explored “unknown scenes, unknown almost in the United States … Who knows ought of Silesia but its loan and dispute! I am serious; it would be a pleasing present to us in the United States to have something of that sort from your pen.”[2] Adams happily obliged, and the Letters on Silesia familiarized American readers with Central European culture, trade, and political affairs.

When traveling through Silesia, Adams fancied himself the first American there, but he soon learned from his guide and visitors’ ledgers that several Americans had preceded him.[3] Even seemingly remote parts of Central Europe proved not all that remote to enterprising American travelers! Adams himself was less a tourist and—owing chiefly to his diplomatic position, which had involved negotiating a new commercial treaty with Prussia—proved most interested in economic knowhow and trade opportunities, outright stating, “one of the chief objects of my present tour was to obtain information respecting the manufactures of these countries.”[4] Detailed accounts of manufacturing processes and potential export items litter his account, from broad-cloth manufacturing (“carried on in a manner which it should seem might serve as an example for our own country”) to linen exports (“The linen manufactured here might doubtless be had in America fifty per cent cheaper than we pay for that of Ireland”), to potentially “advantageous trade” in Bohemian glass (“the immense difference between the prices of Bohemian and English glass, even making every allowance for the necessary difference in the price of transportation, convinces me that an advantageous trade in this article too might be carried on between our country and Bohemia”).[5] He met several merchants who wanted to, or had experimented with, trading directly with the United States, but who came away disappointed since they were expecting direct payments. Their U.S. partners, however, had insisted on paying in goods such as sugar and coffee and bills of credit payable in England.[6] These encounters prompted Adams to reflect on the system of credit on which U.S. commerce with England rested, but with which Central European merchants were either unfamiliar or uncomfortable, and to urge interested U.S. commercial actors to conduct business a little differently in response: “With ready cash, however, or an equivalent for it, I am convinced single speculations in this article [linen], as well as in several others of the manufactures of this country, might be made from the United States with great advantage.”[7]

In addition to assessing export/import opportunities, Adams did find time for sightseeing, but he wasn’t impressed at first. Upon entering Silesia, he remarked: “It is truly the abomination of desolation.”[8] The sight of a castle in disarray led him to make a very obvious political statement extolling the benefits of the U.S. system of government: “The ruin of an old castle, a sight so frequent in this part of the world, always brings … ideas to my mind … as it tends so powerfully to heighten by contrast the pleasure which we derive from contemplating the prosperous condition of our native land.”[9] Republican virtue over monarchical decay seems to mark Adams’ journal as one more typical exemplar of early American travelogues. However, the further away he moved from Prussia proper into the formerly Austrian parts of Silesia, the more positive his assessments became. More and more frequently, Adams noted “extensive and delightful” vistas and “pleasant” towns in the mountainous regions of the province.[10] His description of ascending the Schneekoppe, the highest mountain, is rapturous: “The spectator has but to turn on his heel, and all Silesia, all Saxony, and all Bohemia, pass in an instant before his view; it is therefore truly sublime.”[11]

One of the encounters that most deeply impressed Adams, and one that charmed me when I read through the Letters, was his acquaintance with a local weaver in Bunzlau (now Bolesławiec, Poland), whose “expressive countenance” was “at once full of enthusiastic fire and of amiable good-nature.”[12] Adams judged this man to have been nearly seventy years old when visiting his home, so he had witnessed the transition from Austrian to Prussian rule in his youth.[13] Characterized as a “learned man” who devoted his leisure to “geographical, astronomical, and historical pursuits,” this weaver was among the most intriguing Silesians Adams met on his tour, and he devoted a full two-thirds of one of the letters exclusively to this “honest and ingenious” man’s creations and mechanical devices.[14] These included hand-drawn maps of the rivers and mountains of Europe affixed to every available inch of wall as well as two large tables on which he marked the principal towns of Germany and of Europe, according to “their respective geographical bearings,” which also showed major historical battles. The weaver then amused Adams and his traveling companions with his military assessments and political opinions, for example showing his guests the spots in the Alps “over which the French army of reserve so lately passed, and where Buonaparte so fortunately escaped being taken by an Austrian officer.”[15]

Adams was particularly impressed with the weaver’s handcrafted machine of “the Copernican system of the universe,” which had its fixed stars moving around a miniature solar system every twenty-four hours, so it exhibited the constellations “in the exact position, relative to our earth, in which they really stand.”[16] Another room in his house contained different machines showing the various phases of earth’s moon, the phases of Jupiter’s moons, the apparent motion of the sun around the earth, and the real orbit of the earth around the sun. Finally, Adams recounted that the weaver, in his garret, was in the process of completing a large table that showed the oceans crisscrossed by small ropes in two colors “drawn over the surface in such a manner as to describe the tracks of all the celebrated circumnavigators of the globe.”[17] The differently colored ropes distinguished the voyages from one another, and the weaver had given pride of place to Christopher Columbus, George Anson, and James Cook by constructing three little models of ships bearing their names and placing them somewhere along their respective routes. Pieces of paper affixed to their respective points of departure marked all other navigators and the years of their voyages.

I can only imagine what Adams and his companions made of the scene in front of them, taking in the little ships on their way to America and beyond, sitting atop a presumably blue-painted surface meant to represent oceans. When I read early Americans’ tales of travel in Europe, I normally find grand assessments of local populations mixed with accounts of (often elite) social interactions, judgment on monarchical government, discussions of libraries, art galleries, architecture, and natural sights, and extended disquisitions on trade opportunities. But the last thing I expected to read in an American travelogue through a landlocked province famous for its changing hands between Austria and Prussia was this charming tale of a humble weaver creating a plastic representation of the age of discovery, one highlighting Columbus’s voyages to the Americas in particular, and then showing this off to unexpected American visitors at the dawn of the nineteenth century.

It sounds like it was the last thing Adams expected as well. He apologized to his brother near the end of the letter that “Such is the imperfect description I can give you from a short view of the labours of this really curious man.”[18] Adams’ puzzlement likely had to do with the fact that the weaver’s social status appeared at odds with his leisure pursuits; it clearly intrigued this elite American to meet a humble artisan whose hobbies and conversation betrayed deep learning and knowledge of geography and celestial bodies, awareness of current events, and fondness for the age of discovery. The anecdote does raise all sorts of questions about artisans’ working hours, literacy rates at the turn of the nineteenth century, the availability and affordability of books, Silesia’s embeddedness in global news networks, the spread of Enlightenment thinking, and the extent of scientific training in Central Europe in general. Exploring them is something I look forward to doing as I contextualize Americans’ travels in the region in my book manuscript. For now, though, this anecdote is a good reminder that places Americans deemed remote and even desolate at first glance contained people, even ones of humble status, who were anything but provincial but keenly aware of world events and the important scientific and geographic discoveries of their time.

Nadine Zimmerli is the editor for history and social sciences at the University of Virginia Press. She trained as a modern European historian at the University of Wisconsin-Madison, where she earned her Ph.D. in 2011. At present, she is completing a book manuscript tentatively titled “Cheaper than Paris: American Dresden before World War I.”

[6] Ibid., 163. “Mr. Jöpfer, I find, as well as all the other great linen-merchants in the mountain-towns, has made the experiment of opening a trade directly with America; and, like all the rest, he is not satisfied with the success of his speculation.”