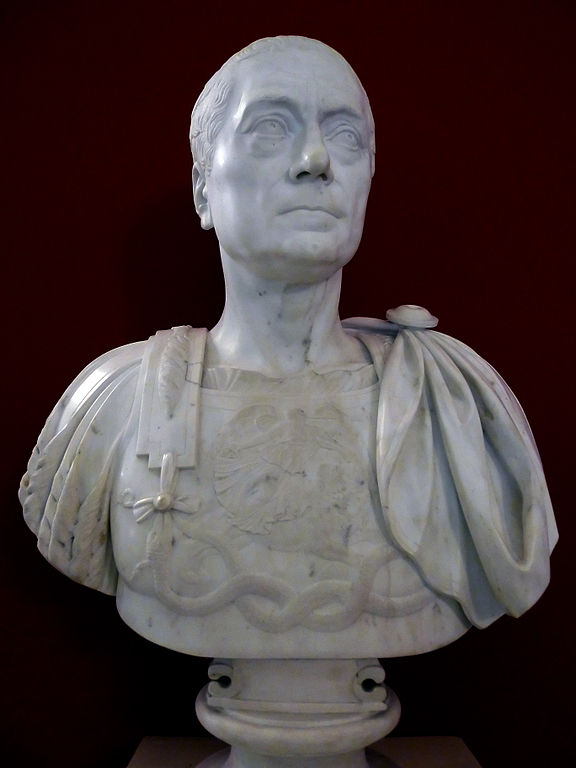 All in His Hands: The Emperor’s Artist Who Sculpted America’s Founding Fathers

In November 1783, readers of the Wienerisches Diarium learned about the craze of monument building across the Atlantic. “Sculpted marble,” “bas-reliefs,” and “statues of bronze” were springing up across the American states to commemorate their independence and to honour their leader, Washington. The editors closed the latest report in the ‘Amerika’ section with a copy of the Continental Congress’s commission for equestrian statue of Washington. “How flattering must such an honour be for him,” they commented.[1]

The American commemorative frenzy was rather old news in some Viennese circles,. Back in April, Franklin’s received a letter written on behalf of Count Franz Moritz von Lacy. Lacy was one of the foremost commanders in the Austrian army, a Field Marshall, who had risen up the ranks fighting against the Prussians during the Seven Years’ War. He sought Franklin’s insights on the eruption of American revolutionary remembrance, since he had a sculptor-friend in mind, Giuseppe Ceracchi, who had just finished a bust of him. Lacy hoped America might offer his friend opportunities for serial employment as they celebrated “the greatest revolution which exists in human history.” Ceracchi, Lacy thought, ought to receive the commission by Congress.[2]

A prodigious child, Ceracchi had enjoyed a meteoric artistic career, enabled by his training with Roman masters at the Academia di San Luca. From his Italian roots, he showcased his works in London for many years before the Habsburg ambassador acquired his services and ultimately tipped him for a position at the imperial court in Vienna. Ceracchi arrived in 1780 and spent the next several years sculpting the most famous faces of the Habsburg Monarchy. His client prior to Lacy was the Emperor Joseph II himself, whom Ceracchi conversed with extensively as he created his bust from life in Schönbrunn Palace.

Both the Emperor and Lacy supported Ceracchi for the American commission. Lacy confided to Franklin, “It is very probable that this scheme derives from a superior hand, [therefore] I could not refuse proposing you the question.”[3] This ‘superior hand’ was undoubtedly Joseph II. But nothing ever came of it; Franklin never responded to Lacy’s suggestion.

The Emperor’s sculptor did not give up, however. Ceracchi’s desire to find work in the United States grew ever stronger, even though he had married an Austrian woman and started a family. In pursuit of his aim, he came to know Thomas Jefferson during his ambassadorship in Paris in the 1780s.[4] Ceracchi completed a bust of Jefferson, overtly neo-classical, which was to Jefferson’s tastes. Years later, Jefferson displayed the bust in the entrance hall of his home at Monticello.[5] Through his close friendship with Jefferson, Ceracchi rekindled his hopes of travelling to the United States.

In October 1790, the sculptor left for Philadelphia to present his plans for a national monument, an equestrian statue of Washington designed on the descriptions he had read in the Wienerisches Diarium. Ceracchi’s vision far exceeded the desires of Congress. His proposal to “perpetuate the memory of American liberty” included four figures depicting Roman gods and goddesses, each fifteen feet high and “made of the finest Italian marble,” surrounding a gigantic bronze statue of Washington on horseback. “The whole structure,” Ceracchi boldly declared, would be “a hundred feet high and three hundred feet wide.”[6] Ceracchi left the plans of his monument for public viewing at a local hotel, but public support was not enough. Congressmen declared it too unrealistic and ruinously expensive. Some even declared it to be un-American.[7]

The rejection wounded Ceracchi but he carried on regardless. During his time in the United States he began a series of busts to commemorate the Founding Fathers. In addition Jefferson’s, Ceracchi completed busts of Washington, Franklin, Alexander Hamilton, John Jay, and George Clinton. All were done in vita, from live sittings; meaning Ceracchi was the only person to have met such an illustrious and wide array of Habsburg and American officials personally.

Despite his closeness to American leadership, Ceracchi’s plans failed. He found the United States an illusionary land of opportunity. He returned to Rome with his family permanently in 1795. From there, he continued his correspondence with several American statesmen. He noted how he and his wife Thérèse Ceracchi (née Schliesshan) were proud that their Vienna-born children had received a “republican education” instead of a “priestly one” from their time in America. “They shall learn to pronounce General Washington’s name with the highest admiration,” he concluded.[8] Ceracchi may not have had a lasting impact upon the United States, but it clearly left an indelible impact upon him and his family.

As a zealous republican, Ceracchi relocated his family once more to Paris, the capital of republican France. Napoleon’s seizure of power, however, incensed Ceracchi. He became embroiled in an unsuccessful plot to assassinate Napoleon that ended with Ceracchi being guillotined alongside two other co-conspirators in 1801. The republican misadventure came full-circle when Thérèse Ceracchi returned to her native Vienna in search of aid, leaving behind their five children in a Rome orphanage. With her health “dilapidated by continual anxieties,” she penned four desperate pleas to President Jefferson for help.[9] Jefferson felt he could not do anything.[10]

The story of Giuseppe Ceracchi shows the influence of post-revolutionary America in Vienna and the sometimes tragic consequences this wrought for people like his family.

[4] Marie Kimball, “Jefferson in Paris,” The North American Review, Vol. 248, No. 1 (Autumn, 1939), 81. Kimball states Jefferson never met Ceracchi’s wife but this is unlikely given Thérèsa Ceracchi’s own correspondence to Jefferson.

[10] Thomas Jefferson to Thomas Appleton, 5th July 1803 in Barbara B. Oberg et al, eds., The Papers of Thomas Jefferson, Vol. 40 (Princeton: Princeton University Press, 2013, 657-659). Jefferson entrusted Appleton, the US Consul in Livorno, with the matter but by the time he received his instructions, Thérèse had relocated to Vienna, see Appleton to Jefferson, 2nd September 1804 via Founders Online, National Archives, last modified June 13, 2018, http://founders.archives.gov/documents/Jefferson/99-01-02-0309.

Ceracchi’s bust of Minerva as Patroness of American Liberty: http://librarycompany.org/artifacts/sculptors-ceracchi.htm

Jefferson’s use of Ceracchi’s busts of Jefferson and Hamilton at Monticello: https://www.youtube.com/watch?v=0w6WKgcw-pk

Ceracchi’s works still on display and owned by the White House: https://www.whitehousehistory.org/sculpture-bribery-and-the-founding-fathers