Recent conferences, lectures, and events that support scholarship on the historic relationship between Austria and the United States. 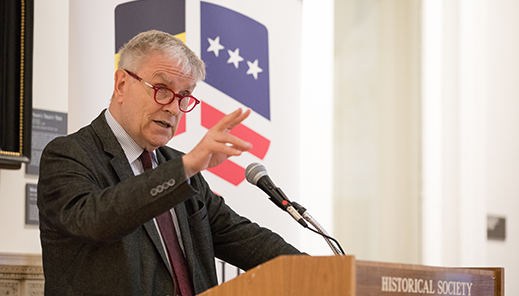 Andreas Nierhaus, curator of architecture at the Wien Museum, and David Schreyer, an architecture photographer based in Austria, embarked on a research trip to Los Angeles and southern California during June 2017 with the intent of taking a fresh look at little-known residences of classic modernism.

A r c h i t e k t u r z e n t r u m W i e n announces the release of Cold War and Architecture written by Monika Platzer. After Austria’s liberation by the Allies in 1945, Vienna became an important arena of the Cold War. In this book, Monika Platzer contextualizes the role of building activity and its protagonists in a nation lodged between competing systems. The global dimension of the East-West conflict and its ramifications are crucial to the reappraisal of Austrian architectural discourse after 1945. Each of the four occupying powers established an extensive cultural program. Great Britain, France, the US, and the Soviet Union used architectural exhibitions as platforms through which to transfer cultural, ideological, economic, and technological concepts and ideas. The battle of the different systems after the Second World War was all encompassing, and continued in the cultural arms race of two transnational networks of modernism, namely CIAM Austria and the International Summer Seminar (known today as European Forum Alpbach). The Botstiber Institute for Austrian-American Studies is honored to support the English translation of this important work. Distributed by Park Books, the English translation of Cold War and Architecture may be purchased via The University of Chicago Press Books here:

From the Post WWI Aid in Austria & Central Europe Symposium

PD. Dr. Friederike Kind-Kovács, a former Botstiber-CEU Fellow, discusses the recent conference on “Post World War I Aid in Austria & Central Europe” which took place between September 26 and 27, 2019, at the Austrian Academy of Sciences in Vienna.

‘Cold War and Architecture’ Exhibit at the Architekturzentrum Wien

After the liberation of Austria in spring 1945 and the occupation by the four victorious powers of Great Britain, France, USA, and the Soviet Union, Vienna became a central stage for the Cold War. During the ten-year occupation, Austria experienced the transition from an authoritarian system of government to a democratic consumer society as the contrasting political ideologies of the Allies established their architectural visions.

"This year, 2019, marks a hundred years since the end of World War I, which devastated Austria and other Central European countries. Austria in particular suffered from the lack of food and fuel leading to widespread child malnutrition. The American Relief Administration provided on average 300,000 hot meals a day to school children over a period of several years.

Leon Botstein, President of Bard College, and The Bard Music Festival received a BIAAS grant for its exploration of the life, work, and legacy of Austrian composer Erich Wolfgang Korngold. Taking place over two weekends (August 9–11 and 16–18, 2019), the festival will look at Korngold’s life on both sides of the Atlantic, from his upbringing in Austria, with a focus on how its politics and culture shaped his life, to his time in the United States, where the specific musical language developed during his time in Vienna continued to influence—and infuse—the scores he created for film. The lasting influence on U.S. culture of Korngold and other artists who emigrated from Austria will also be explored.

On May 9th, 2019 at the Historical Society of Pennsylvania, Dr. Anton Pelinka, professor of political science and nationalism studies, delivered a public lecture entitled “Good Uncle Sam, Bad Uncle Sam: The Perception of the United States in Post-Habsburg Austria.”

"Cultural Politics and Propaganda: Mediated Narratives and Images in Austrian-American Relations (1900-2000)" Conference took place from March 28 - 30, 2019 at the Austrian Academy of Sciences in Vienna, Austria. "Culture Politics and Propaganda" was hosted by the North Atlantic Triangle Commission and sponsored by the Botstiber Institute for Austrian-American Studies and the Austrian Marshall Plan Foundation.